Is Blockchain the U.S. Military's Next Great Weapon?

Thursday, January 09, 2020 | by Eric Powell
As blockchain becomes more popular, innovative minds have begun to explore ways to unleash its power—including the U.S. Department of Defense. 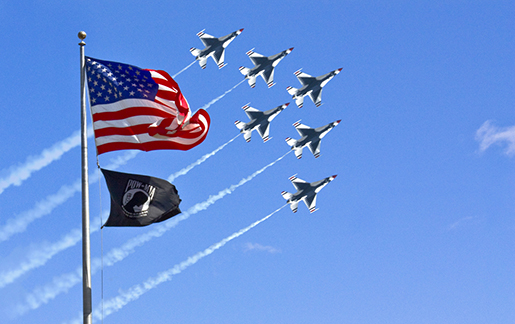 Now that blockchain technology has become a topic of mainstream interest, innovative minds have begun to explore ways to unleash its power. Unsurprisingly, the United States Department of Defense (DOD) has taken an interest in devising several use cases to take advantage of this emerging technology.

Since antiquity, militaries have required specialized professionals to maintain their daily needs. Whether it was hot meals, uniforms, or weapons crafting, these individuals (i.e., logisticians) played a critical role in the success or failure of major military campaigns. Circa 315 BCE, Alexander the Great, was quoted as saying, “My logisticians are a humorless lot… they know if my campaign fails, they are the first ones I will slay.” Approximately 2,100 years later, Napoleon Bonaparte is attributed with the quote, “The amateurs discuss tactics: the professionals discuss logistics.” Essentially, both of these military geniuses knew highly successful armies were less effective without a consistently strong supply line.

Defensive Maneuvers in the Field

Recently, the United States military has shifted its focus from fighting asymmetrical opponents to reassessing its threats posed by nation-states. Specifically, those in the Asia-Pacific theatre. As usual, a critical component for operational success will be a highly efficient supply chain. Thus, the main characteristics of blockchain (i.e., decentralization, immutability, distribution, tokenization, and encryption) lends itself well as a solution to some of the complexities of military logistical operations.

Hence, in 2018, the US Defense Logistics Agency (DLA), studied how blockchain could improve efficiencies during rapid build-ups and movement of personnel and equipment. They used 2017’s humanitarian response to Hurricane Maria which devasted Puerto Rico. In this case, DLA researchers postulated that blockchain’s inherent decentralization and distributed nature could provide faster and more precise sharing of critical data regarding the movement of assets.

Another example is the public-private collaboration between the DOD and the University of Notre Dame in the development of “Simba Chain.” Simba Chain, a cloud-based blockchain network, was built to provide a platform for secure messaging and P2P transactions. Similar to other more well-known blockchain networks such as Ethereum, it accommodates the use of decentralized applications (dApps) where developers can create smart contracts between multiple entities. Thus, doing away with the need for a third-party intermediary to validate an exchange of value.

Also, in 2018, The Treasury Department’s Office of Financial Innovation and Transformation (FIT) ran a blockchain-powered pilot program focused on decentralizing the tracking, management, and transfer of employee mobile devices. While they successfully achieved these technological goals, the project also revealed at least three major drawbacks of trying to merge today’s government capabilities with blockchain solutions.

First, the federal government, as a whole, would need to standardize its data for optimal use on a blockchain. Second, federal agencies would need to begin sharing data across silos to scale any serious blockchain implementation. Finally, the government needs to upskill federal workers on blockchain technology in order to take advantage of its full potential. Researchers spent a tremendous amount of time educating people on what a blockchain is versus what and how the technology can be used to address operational challenges.

Blockchain Is Coming, Are You Ready to Deliver?

Today, the word “blockchain” is still strongly associated with cryptocurrency and, of course, “Bitcoin.” Adding to the confusion are several persistent myths about its use as a money-laundering tool for criminal activity. Regardless, this widespread confusion is a golden opportunity for CompTIA’s channel partners.

Partners can provide immediate value to the DOD and defense contractors by first addressing common misconceptions. While discussing current and future capabilities and needs, partners should try to gauge their public sector clients’ understanding of blockchain and where it fits in their roadmap planning and their lifecycle management. These discussions can also help to facilitate a better understanding of blockchain and possibly serve as a catalyst for educating public sector employees about its potential.

Within the past three years, major cloud providers such as Amazon, Microsoft, Google, and IBM, have created turn-key blockchain solutions. Thus, reducing the development hurdles needed to launch a commercial-grade blockchain network. Partners should seize this opportunity to rapidly develop, test, and evaluate blockchain solutions for any number of challenges. This effort will not only help their clients to ascertain if blockchain is right for them, but it will also add to the broader body of knowledge of blockchain's potential use cases across the public and private landscape.

In summary, many are confident that the DOD will implement blockchain technology to strengthen the US military’s global reach and global power. With the support of CompTIA's educational infrastructure, its channel partners are well-positioned to help their clients realize blockchain’s promise of delivering robust, decentralized, P2P networks that reduce the operational friction caused by current legacy systems.

Eric Powell is the founder of Rylet Industries, a member of CompTIA’s Blockchain Advisory Council, and a United States Air Force Veteran.