My CompTIA Server+ Favorites: Virtualization and the Cloud 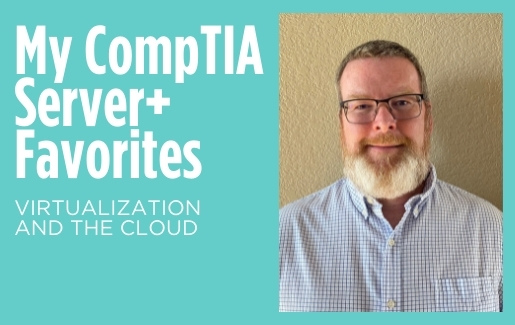 Virtualization has revolutionized the IT world. The concepts and practices of administering virtualized servers are critical systems administrator (or sysadmin) skills. This is why it’s a big part of the new CompTIA Server+ (SK0-005) exam.

I recently introduced a series of articles covering my favorite topics from the new CompTIA Server+.

In this series I am covering three different CompTIA Server+ topics:

Check out the other two articles in this series:

This is part 1 of the series.

First, we’ll look at the older way of managing servers so that the problem that virtualization addresses is crystal clear. Next, we’ll discuss basic virtualization. Finally, we’ll explore how the cloud takes virtualization to another level. Read on as I discuss how virtualization and cloud computing are covered in the new CompTIA Server+ course content.

The Problem with the Old Server Lifecycle

Servers function with a particular lifecycle.

This server lifecycle isn’t very flexible. If the project parameters change, or the hardware requirements are modified, it is relatively difficult to re-spec the server. Sure, maybe another processor can be added, or more RAM installed, but overall, it is difficult to radically change the server’s configuration.

Many organizations over-purchase hardware, realizing it is better to have a server that is too powerful rather than one that is underpowered. The result is wasted computing potential.

Obviously, this system works, because the client–server computing model has been dominant for a very long time. However, the increased flexibility and potential of virtualization has changed everything.

Physical servers are not a thing of the past, but their requirements have changed. Often, physical servers no longer manage specific roles, but instead are the host platforms for virtualization solutions.

Virtualization uses the server’s hardware in a different way than a single OS does. The virtualization solution allows a server administrator to take all of a server’s compute power and allocate it to multiple guest systems called virtual machines (VMs). These VMs have access to some of the server’s processor time, RAM, storage space and network connectivity.

It’s important to realize that these allocations can be modified automatically or by the administrator, adjusting the compute power on a per VM basis. If a project changes, a VM can be granted additional resources. Equally important, if a VM is consuming less compute power than it has been allocated, that power can be reallocated to other VMs.

Virtualization also improves the way that redundancy and high availability are designed for modern server environments. VMs can be replicated among physical hosts to reduce single points of failure, and they can be easily snapshotted and recovered.

Scaling out is also much faster than it was with physical servers. Administrators can quickly clone additional identical VMs to manage higher service demands.

It’s important to emphasize this agility and flexibility when studying for your CompTIA Server+ certification because virtualization management is a daily task for administrators.

The Cloud, Servers and Virtualization

As we are all aware, today’s IT world is more and more focused on cloud computing. There are several ways of conceiving cloud computing. One way is to think of it as off-loading responsibility. Another way is that the cloud is just someone else’s computer. Let’s examine both concepts and how they are applied in the course.

With traditional servers, sysadmins were responsible for all aspects of server maintenance. When a network interface card (NIC) failed, a hard drive crashed or a power supply blew out, it was the business’s own IT team that had to address the failure. As a sysadmin for a small organization, I recall replacing server hard drives regularly.

What if I could have off-loaded the responsibility for hardware maintenance to someone outside of our organization? Even better, what if I could have had someone else configure database environments or manage basic user applications like Microsoft Office?

That’s where the cloud comes in. There are three primary cloud service models outlined in the CompTIA Server+ exam objectives. One way of understanding these three is how responsibility is off-loaded to a cloud service provider (CSP):

It’s worth noting, as CompTIA Server+ does, that an organization can host its own private cloud in its own data center using cloud management technologies. This provides the benefits of cloud virtualization while allowing the organization to retain complete control of the environment.

CompTIA Server+ doesn’t stop with an explanation of these options. CompTIA CertMaster Learn for Server+ covers decision making with regard to deploying a physical or a virtualized server and whether to use an on-premises or public cloud solution.

Virtualization Is an Essential Topic

Start learning the topics covered by CompTIA Server+ with CompTIA CertMaster Learn. Sign up for a free trial today.