Wednesday, June 23, 2021 | By Damon M. Garn
Part 2 in a series of my favorite CompTIA Server+ topics, with server deployments, basic configurations, and the importance of both Linux and Windows. 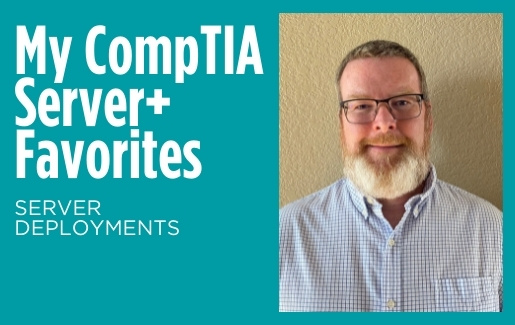 Check out the other two articles in this series:

I recently wrote that virtualization and cloud computing were some of the more interesting subjects to me in the new CompTIA Server+ (SK0-005) exam. Today, I’ll dive into another of my favorite topics from the new certification exam, server deployments and initial configuration tasks.

I’ll go into why it’s essential to recognize both Linux and Windows as common server platforms that deserve attention, that the deployment process requires not just OS installation, but also configuration, and that application deployment is necessary for end-user success.

Server deployment options have changed immensely over the years. I’ve been in the industry long enough to recall loading operating systems from floppy disks — not fun by today’s standards.

Manual installations, where the administrator is guided by a wizard to answer a series of questions and then the operating system (OS) files are copied, are still around today. While typically not the most efficient method, there is still a time and place for this approach. It’s usually most effective in temporary testing environments where you expect to complete the installation only once.

Unattended installations are a variation of the manual approach, and CompTIA Server+ also covers this method. With the basic approach described above, the administrator manually answers each question the installation wizard asks regarding the desired configuration (hostname, networking, OS options and features, disk partitioning, etc.).

Unattended installations include a text file that contains the answers to the installation program’s questions. Instead of the program expecting an administrator to input answers, the answers are discovered in the text file. These installations are quite a bit quicker than manual, but they are still fairly time consuming.

Imaging is another approach, and it’s much more common. With imaging, a source computer has an OS installed and configured. A copy, or image, of that source computer is uploaded to a storage server.

OS images can be deployed to numerous destination servers, providing identically configured systems quickly and easily. It is certainly possible to both customize these images and provide unique information to them, such as server names. Imaging can be very effective for classrooms, lab environments, end-user workstations and areas where many similar servers need to be deployed quickly. Knowing where and when to use various deployment methods is an important part of CompTIA Server+.

OS source files aren’t usually distributed by CD/DVD anymore. Instead, they are downloaded from the vendor site or perhaps provided via a USB flash drive. Understanding how the installation files are delivered to you may impact your installation choices.

CompTIA Server+ also acknowledges that some installation programs expect administrators to work from the command line while, others provide a graphical user interface (GUI) to aid in installing the OS.

Finally, deployment methods vary somewhat depending on whether you are standing up a physical server or a virtual machine (VM). Virtual machines can be installed using the above methods, but they also provide another choice: Cloning.

Cloning VMs is somewhat related to imaging and allows an administrator to duplicate VMs very quickly. CompTIA Server+ covers virtualization, and so the deployment of virtual machines — whether on-premises or in the cloud — is essential.

The CompTIA Server+ exam objectives contain many references to deployment methods and options. Installing an OS is an easy task these days, but it’s still a critical one. I was glad to see CompTIA Server+ giving the subject the appropriate level of attention. 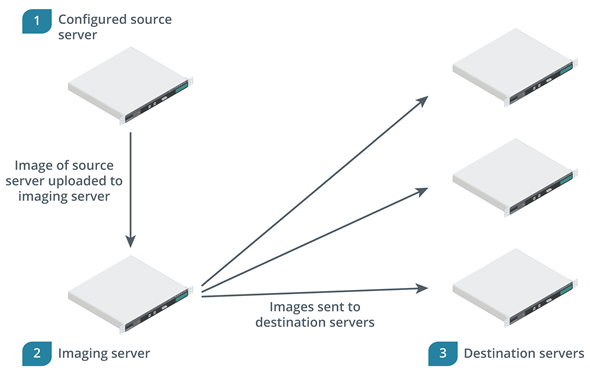 The source computer’s configuration is uploaded to a deployment server. The image is then deployed to one or more destination servers.

Too often, attention is given to one server operating system or the other: Linux or Windows. I take the approach that administrators should use the best tool for the job. In some cases, that will be an open-source OS like one of the Linux distributions, and, in other cases, it will be Microsoft Windows Server. I don’t tend to get too excited about evangelizing for one or the other.

Therefore, in CompTIA Server+, plenty of attention is given to both systems. In today’s world of on-premises data centers and cloud-based infrastructure as a service (IaaS), it pays to know the basics of each OS. It also pays to understand the differences in licensing as it pertains to open-source and proprietary solutions.

With my background in both platforms, I enjoyed providing attention to Linux and Windows. CompTIA Labs for Server+ continues this approach by providing similar lab tasks accomplished on each platform. In other words, there’s a lab on Windows performance monitoring with a corresponding lab on Linux performance monitoring. These labs allow for a great compare and contrast approach to those system administrators who are only familiar with one of the two platforms. I am excited about this section because it provides very practical information to CompTIA Server+ candidates.

Read more about CertMaster Labs and other ways to study for CompTIA Server+.

There are far too many configuration tasks in CompTIA Server+ to cover here, but I’ll take a moment to point out some especially useful topics:

I’ll also take a moment to call out the subject of network interface card teaming (NIC teaming), which allows systems administrators to combine the bandwidth and functionality of network cards, providing both improved performance and redundancy.

3 Topics to Watch
Virtualization and the Cloud
System Hardening

The function of a server is to provide a service or useful resource to consumers (usually end-user workstations).

Most of that functionality is provided by applications, such as these:

Applications and services such as these need to be installed on the system and configured correctly. Some configurations, such as file sharing, are fairly straightforward. Others, such as authentication and remote access, may be significantly more challenging.

The CompTIA Server+ exam requires candidates to both identify these types of services and establish common deployment tasks. Much like server deployments, application deployments include installation, licensing, initial configuration and baseline management.

Why Are Deployments One of My Favorite Topics?

There are so many ways to deploy servers — whether physical or virtual — and it’s important to understand the advantages and disadvantages of each method. The reason I enjoy these topics in the new CompTIA Server+ is that they are practical. These represent fundamental skills and concepts that all server administrators need to know. Honestly, system deployment is probably not the most glamorous part of an administrator’s job, but it is one of the most critical. I applaud the CompTIA Server+ exam developers for giving the subject a reasonable amount of coverage.

Ready to get started? Download the CompTIA Server+ (SK0-005) exam objectives and then sign up for a free trial of CertMaster Learn for CompTIA Server+.