Polar Vortex Got You Down? Check Out These Warm-weather Tech Towns

Friday, February 8, 2019 | By Jessica Frank
If you see a street covered with ice and snow, you may be wishing for a life where winter weather isn’t generally a problem. Check out these four warm-weather tech towns. 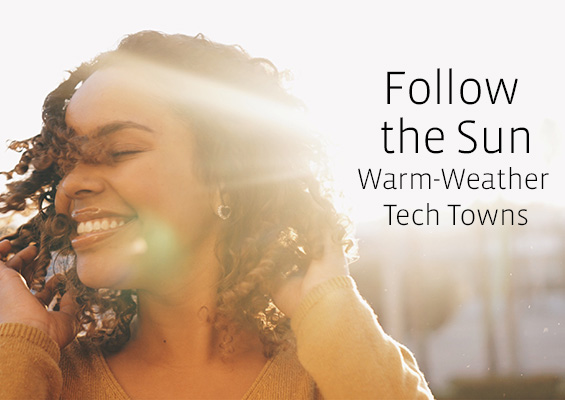 If you look out your window and see a street covered with ice and snow, you may be wishing for a life where winter weather isn’t generally a problem. If you’re dreaming of a more temperate climate where your commute won’t involve following a snow plow, we have some locations for you to check out!

Charlotte and the surrounding areas of Concord and Gastonia rank first on the 2018 CompTIA Tech Town Index, with an annual median salary of $87,755 for IT pros and an expected 11% tech job growth in the next five years. The Charlotte area is brimming with possibilities for IT pros, and with a cost of living 1.3% lower than the national average, IT pros living here can get more bang for their hard-earned buck while enjoying the great weather.

What Is the CompTIA Tech Town Index?

The tech industry is known for its high salaries — but how far do IT wages go when stacked up against the cost of living in pricey tech hubs? And what happens when you factor in measures of job opportunity and job growth? Based on job posting data over a 12-month period (August 2017 to July 2018), CompTIA looked at 20 metropolitan areas with populations greater than 250,000, where demand for tech workers is greatest. The cities were then ranked based on cost of living, number of open IT positions and projected job growth over the next 12 months and the next 5 years.

U.S. News and World Report ranks San Jose fourth (tied with its neighbor San Francisco) on its Best Places to Live in the United States for Weather list, and it’s not hard to see why. With an average high temperature of 72 degrees and an average low of 50 degrees, San Jose has fairly mild weather year round. In fact, it is very rare for San Jose to experience temperatures at or below freezing. And with an average of 17 inches of precipitation a year (the national average is 39 inches), residents of San Jose can enjoy the outdoors as much as they’d like!

San Jose ranks fourth on the Tech Town Index, with an annual median salary of $122,242 for IT pros and 11% growth in the field expected in the next five years. San Jose is home to some of the biggest companies in the world, such as Apple, Amazon, Cisco and Google; they also have the most patents per capita, according to the U.S. Patent and Trademark office.

Now I know what you’re thinking…isn’t San Francisco the place with all the rain and fog? While it’s true that they may see more rain than the other places on this list, the average annual rainfall is still lower than the national average!

With a fog that burns off by the afternoon, San Francisco sees about 260 days of clear or partly cloudy weather per year on average. The average high temperature is 63 degrees, and the average low is 50 degrees, earning San Francisco a tie for fourth place in U.S. News and World Report’s Best Places to Live in the United States for Weather.

The Tech Town Index  ranks San Francisco fifth in the country for IT pros. The average salary here is $110,448 for the industry, and the city is expected to have a staggering 15% IT job growth in the next five years! While some cities see a rise and fall of IT jobs, San Francisco has consistently seen growth. San Franciscans in the IT industry may work for large companies like Facebook, Wells Fargo, Microsoft and Oracle or tech startups.

While some refer to it as “Hot-lanta,” Atlanta has a number of cooler evenings that even out its hot summer days, giving the city an average overall temperature of 63 degrees. It gets a little more rain than the national average — about 51 inches average a year — but the high temperature in February is 57 degrees, which is warmer than many other U.S. cities in the middle of winter.

Atlanta and the surrounding areas of Sandy Springs and Roswell rank ninth on the 2018 Tech Town Index. The average salary here is $82,077, with a cost of living 3.9% lower than the national average.

The area is expected to see IT job growth to the tune of 6% in the next five years. In the past few years, the city of Atlanta has rolled out tax incentives for startups, hoping to have its city be the home for high-tech businesses. Between the startup boon and companies like Deloitte, Accenture, Equifax and Verizon Communications hiring, there were nearly 76,000 IT jobs posted there between August 2017 and July 2018.

If the weather outside is frightful, maybe it’s time to seek a climate more delightful in one of these four tech cities. They all have the great combination of pleasant temperatures and growing IT fields, making them ideal for both work and leisure, especially in the winter months!

Dig In: 3 Tech Towns for IT Pros Who Love Food