Dig In: 3 Tech Towns for IT Pros Who Love Food

Friday, December 14, 2018 | By Eileen Ristau Tauchman
Whether it’s trying out the new trendy spot or revisiting your favorite place for the millionth time, restaurants bring people together – and living in an area with awesome cuisine is extremely desirable. Check out these three Tech Towns that also have great food scenes. 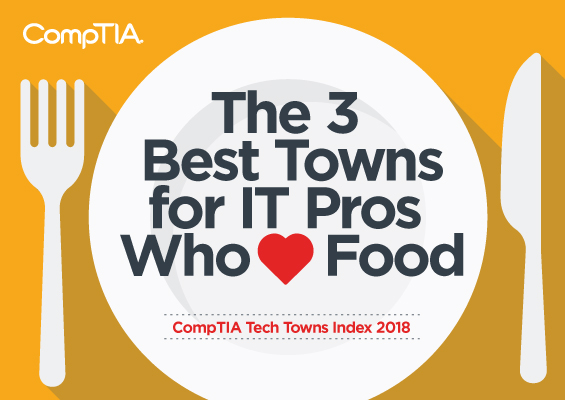 With more than 600,000 restaurants in the United States, consumers love going out to eat. Whether it’s trying out the new trendy spot or revisiting your favorite place for the millionth time, restaurants bring people together – and living in an area with awesome cuisine is extremely desirable.

U.S. News and World Report identified the best foodie destinations in the United States, and fortunately there is an overlap with some of the cities identified in the CompTIA Tech Towns Index! If these three cities get your mouth watering, maybe it’s time to make your move.

San Francisco is full of winding roads, hills with beautiful views of the skyline and the Bay, attractions like Alcatraz Island and Fisherman’s Wharf, and of course, a variety of delicious cuisines. From cozy cafes to upscale establishments, the restaurant scene in San Francisco is both charming and exciting. The Golden City ranks at spot number 5 on the CompTIA Tech Towns Index and reigns supreme at number 1 on the best foodie destinations list. 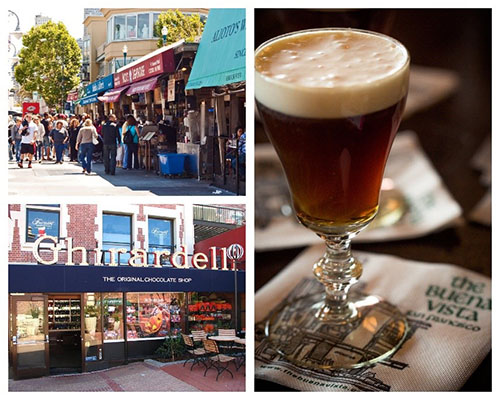 On a gray day, get the cioppino – San Francisco’s famous seafood stew – at Tadich Grill to warm you up from the inside. Or if it’s nice, take a stroll along Fisherman's Wharf and eat fresh seafood at any number of restaurants on the water.

After dinner, get an ice cream sundae at Ghiradelli Square, and end with a nightcap at the Buena Vista, known for its Irish Coffee. Operating since 1916, it sometimes serves up to 2,000 Irish Coffees a day!

San Francisco is expecting 15% IT job growth over the next five years. Workers get paid $14.52 more per hour, which is needed since cost of living is 64.2% higher than the national average. The median salary for an IT pro is $110,448, the highest of the three foodie cities in this article.

What Is the CompTIA Tech Town Index?

The tech industry is known for its high salaries — but how far do IT wages go when stacked up against the cost of living in pricey tech hubs? And what happens when you factor in measures of job opportunity and job growth? Based on job posting data over a 12-month period (August 2017 to July 2018), CompTIA looked at 20 metropolitan areas with populations greater than 250,000, where demand for tech workers is greatest. The cities were then ranked based on cost of living, number of open IT positions and projected job growth over the next 12 months and the next 5 years.

The laid-back city of Seattle has so much to offer to people with many varying interests. If you like the outdoors, you can enjoy kayaking, hiking and camping. If you appreciate the arts, check out the Chihuly Garden and Glass and the Seattle Art Museum. And, of course, if you consider yourself a foodie, then you’re in luck – Seattle places number 7 on our Tech Towns Index and number 8 on the best foodie destinations list. It may rain close to 150 days a year in Seattle, but its food scene is far from gloomy.

Similar to its fellow waterfront Tech Town San Francisco, seafood is king in Seattle, with more than 205 seafood restaurants in the city. Also common are cafes and bakeries, where you can stop in for a quick coffee and pastry. Seattle is also home to many unique breweries for the beer lovers! 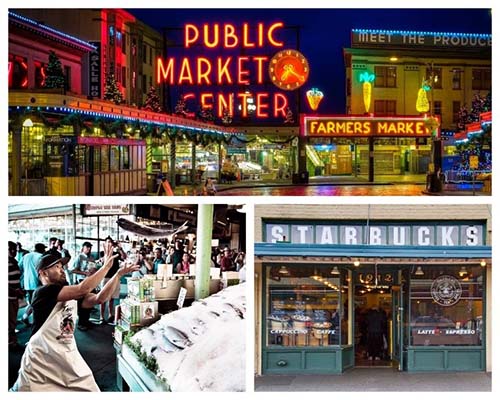 If you’re going to go to one place in Seattle, make it Pike Place Market. You won’t want to miss out on the food entertainment at the world-famous Pike Place Fish Market, where fishmongers launch large fish over the counter to customers after they purchase them. And while you’re here, grab some of the freshest seafood in the Pacific Northwest.

Seattle is also home to a little coffee shop you may have heard of – Starbucks! The original Starbucks was established in 1971 at Pike Place Market and is now one of the biggest coffee franchises in the world.

Seattle is expecting 11% IT job growth over the next five years. Workers get paid $14.18 more per hour than the national average, and the cost of living is 19.9% higher. You may have noticed the cost of living is 44% lower than in San Francisco, but the median salary for an IT pro is almost identical at $109,741, giving you more bang for your buck.

Austin, Texas, is known as the live music capital of the world, but it is also number 3 on our Tech Towns Index and number 13 on the best foodie destinations list. Austin has a reputation for being a little quirky, which is why its slogan is “Keep Austin Weird.” And because Austin has close to 230 sunny days per year, a lot of the food life is enjoyed outdoors.

With its close proximity to Mexico, Austin has more than 900 Mexican restaurants, according to Yelp. But burger and BBQ joints are also in ample supply, with about 100 of each. And while there are many classics in Austin, you can expect some avant-garde flair as well. 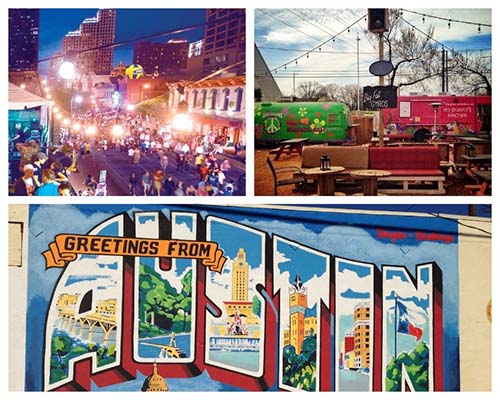 One must-see area in Austin is Sixth Street. Sixth Street is one of the city’s most iconic streets and is known as the center of what made Austin famous for live music. Sixth Street cuisine ranges from cheap dive bars to upscale restaurants with famous chefs, so everyone is bound to find something they like!

Another awesome spot is Rainey Street – known for its many food trucks. Food trucks are creative enough when solo, but put 10 or more together, and you’ve got a foodie’s paradise!

You can’t visit Austin without heading to South Congress. Grab tacos at Torchy’s and then catch a band at the Continental Club – an intimate venue that opened in 1955 and has featured headliners ranging from Stevie Ray Vaughn to Social Distortion.

Austin is expecting 15% IT job growth over the next five years. The cost of living is 3.4% lower than the national average, and workers get paid $0.98 more per hour. The median salary for an IT pro in Austin is $82,285!

If you are an IT pro looking to relocate and having a stellar food scene is important to you, consider one of these three foodie cities. On top of delicious eats, these cities also offer a lot of fun activities for all interests, and most importantly, are great locations for the IT pro to have a successful career.

Polar Vortex Got You Down? Check Out These Warm-Weather Tech Towns