Why You Should View Linux as a Core IT Skill: 6 Areas of IT That Use Linux

Monday, February 26, 2018 | By Jason W. Eckert
Today, Linux is the most diverse and aggressively developed operating system in the world, primarily due to its open-source nature. And if you work in an IT field, you’ve probably been exposed to more Linux in the last few years than before. 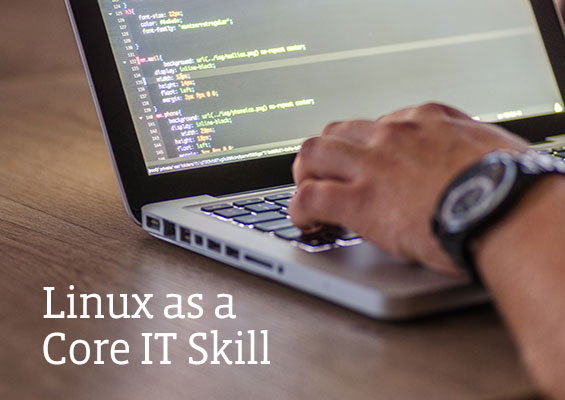 Twenty-five years ago, some fellow students and I were sitting in a computer lab at the University of Waterloo trying to compile a new open-source UNIX operating system called Linux on a PC. Back then, installing a Linux system was about as difficult as nailing Jell-O to a tree, but we managed to get a system installed after only four days of work.

Linux has come a long way since then.

Today, Linux is the most diverse and aggressively developed operating system in the world, primarily due to its open-source nature. And if you work in an IT field, you’ve probably been exposed to more Linux in the last few years than before. In fact, the Gartner research company identified Linux as the fastest-growing operating system segment in the computing industry in 2017.

6 Areas of IT That Use Linux

So, what does this mean for you as an IT professional? It means that you’ll likely be working with far more Linux systems and technologies in coming years, regardless of whether you currently work with them or not. It also means that Linux is fast becoming a core skill set for IT professionals working in any facet of the industry. However, you should start viewing Linux as a core IT skill today, especially if you work with the following.

As internet technologies have evolved over the past decade, so has the technology used to provide services to internet users and organizations. Large-scale, distributed cloud platforms have appeared, and more and more companies are moving certain aspects of their information infrastructure to the cloud. This includes hosted services (e.g., email, web), containerized apps and infrastructure services, such as authentication and management.

And the operating system that dominates the cloud is Linux! In other words, if you want to create a distributed cloud service, push an app to Amazon EC2 or Docker Cloud, or move a production database to a cloud provider, you’ll definitely need to know Linux. Even Microsoft’s Azure cloud hosts Linux.

Because it is open source, the Linux operating system can be customized quickly and easily. As a result, cybersecurity and Linux go hand in hand.

Nearly all security appliances that you see within organizations today run Linux, including next-generation firewalls (NGFWs), which filter traffic entering and leaving your organization for malware, spam, intrusion attempts and attacks, and security information and event management (SIEM) appliances, which are designed to centrally monitor the security of other systems and network devices within your organization to detect vulnerabilities and malicious activity.

Moreover, most hacking utilities are Linux apps. If you perform penetration testing to audit the security of your organization or other organizations, you’ll likely be using a large suite of apps running on a Linux distribution that is geared for hacking.

Just as most security appliances run Linux, so do most devices that provide network functionality. Nearly all wireless routers today run a custom Linux operating system, as do most enterprise-level wired routers and switches. Moreover, these devices often provide a command line interface where you can enter Linux commands to configure IP, routes, interfaces and security, as well as perform advanced tasks such as scripting, automation and integration with other technologies.

Even if your network device doesn’t run Linux, it probably runs a flavor of UNIX. Since Linux is simply an open-source UNIX operating system, many of the same administration skills apply. For example, the commonly used Cisco brand of wired routers and switches typically use a UNIX operating system called Cisco IOS, which is why most Cisco IOS commands bear great resemblance to the equivalent commands in Linux.

By 2016, more than 9 out of 10 smartphones in the world ran Google Android, which is simply a Linux operating system that contains an Android framework on top. But because it’s freely available, Android isn’t limited to just smartphones – tablets, smart appliances, GPS devices, car navigation systems and hundreds of other embedded technologies, or internet of things (IoT) devices, use a modified Android operating system.

While manufacturers can install Android on their IoT devices, they can instead choose to create a custom, streamlined Linux system for the device itself, since Linux is a free and open-source operating system. Consequently, IDC reported that more than 80% of all IoT devices in 2017 ran a custom Linux system. Thus, if your organization creates or uses Android-based mobile technologies, embedded technologies or IoT devices, you’ll likely be supporting the Linux operating system.

Many organizations today deploy high-performance computing clusters (also called supercomputers) to perform tasks such as scientific modeling, rapid prototyping, 3-D graphic rendering, statistical analysis and more. As of November 2017, TOP500 reported that all 500 of the world's fastest supercomputers are running Linux. This isn’t surprising, especially since most supercomputer development over the past 20 years has focused primarily on Linux. As a result, if your organization deploys HPC, it is likely going to use a supercomputer framework that runs on the Linux operating system.

Of course, the proliferation of Linux technologies isn’t new – it’s been happening steadily over the past two decades. Even Scott Adams reflected on this trend more than a decade ago in one of his Dilbert web comics.

Ready to prove you have the Linux skills businesses need? Take CompTIA Linux+ to show what you can do.