Speeding Up Cloud Services with SD-WAN

Friday, April 30, 2021 | By Ashley Watters
Learn how to speed up network traffic and cloud services with SD-WAN. 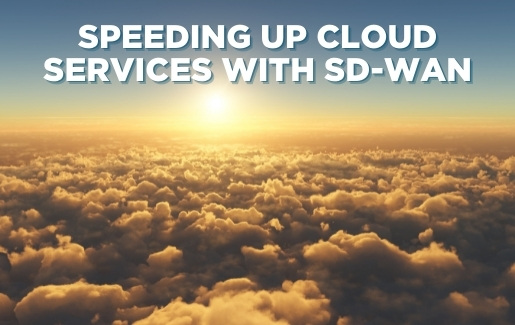 Network engineers must attend to a variety of network issues, but the majority will tell you that the one they hear about most is slow network speeds. Latency and lagging are polite terms to describe the response when slow network speeds inhibit productivity. These problems have become especially noticeable with the advent of increased usage of the cloud, as well as IoT devices. We live in an increasingly hybrid-computing world, and traditional networking practices can’t quite keep up. But not to worry, there is a superhero to help you speed up your network, known as Captain SD-WAN! (Okay, maybe not the best superhero name.)

SD-WAN is a tool that can help you more efficiently manage network traffic, keeping those polite reports of slow speeds to a minimum. People are using it right now – currently over $1 billion has been spent on implementation. That figure is expected to increase 60% by 2026.

SD-WAN stands for software-defined wide area network. An SD-WAN simplifies the network in many ways because it can intelligently route traffic to help boost network speed. SD-WAN provides greater capabilities for businesses because it uses a new approach to manage connections and services. This approach is managed by software that supports multiple connection types, segments and selects network paths dynamically, and provides a relatively simple interface that allows for instant management.

The critical functionality of SD-WAN involves the ability to segment traffic to choose the path of least resistance, along with ensuring that the traffic can be securely transferred.

SD-WAN can route traffic based on your identified criteria, including the following:

Considering that the transmission of data is actually referred to as traffic, it may be beneficial to envision our data as transit. SD-WAN connections are able to leverage existing network routing techniques, such as multi protocol label switching (MPLS), as well as broadband and 4G and 5G networking services.

When it comes to understanding efficient traffic routing, it’s best to start with an analogy. Raise your hand if you like commuting to work. We’re guessing there are not many hands up in the air. If you’re like most of us, you want the fastest route home with the fewest obstacles.

In some cases, the shortest route (by miles) to your workplace using your car might involve using a poorly-maintained road. You don’t want to drive your car through potholes and around fallen objects or be slowed by stoplights every 50 feet. Similarly, if you opt for public transit, you likely want the path that takes you straight home in the fastest way possible, rather than being routed to places you don’t need to go.

This is similar to what SD-WAN does for internet traffic. Traditional network devices have been pretty good at choosing the best route. But due to higher traffic volumes and increased sophistication of traffic, we need a more efficient way to choose that route.

SD-WAN is able to identify the route that takes you directly home without being obstructed by stoplights, bottlenecks and rough roads. This is because the software used in SD-WAN solutions is more centralized, intelligent and robust. Instead of taking the traditional router-centric approach to making decisions, a smart, centralized software “brain” makes that decision. Let’s just say that if SD-WAN were directing traffic, we might see more hands raised in favor of the work commute. SD-WAN uses software to dictate which paths are open and which are blocked.

Most modern architectures rely heavily, or at least partially, on cloud services for productivity. Whether you are using the cloud for applications, content sharing or even just file sharing or storage, it’s a fair bet you are using some form of cloud service. And having that fast internet connection is essential for getting things done.

Similar to congested roadways, using a public network can clog your channels for data transmission, leaving you a little more prone to road rage (or network rage) when speeds lag and limp along.

Because businesses require secure transmission of traffic and good internet speeds to allow for a smooth and productive working environment, organizations often opt for a dedicated connection from branch offices to the company’s main network distribution facility (often a home office). This traffic then goes from the home office out to the cloud provider. Then, to get back to you, the traffic must go back through the home office before reaching you, the final destination.

SD-WAN lets organizations access good bandwidth and high speeds by routing traffic directly out to applications and services without needing to be routed through the main distribution facility or home office.

Imagine having to ride the bus away from your office and through a routing station, before going out to your residence. With SD-WAN, smart choices happen, and the roads are cleared of traffic so you can drive a straight route from work to home, no stops needed.

While this analogy may seem a bit simplistic, SD-WAN is actually highly sophisticated and is helping to revolutionize network design. Rather than simply plugging it in as a retroactive tool, SD-WAN is helping us to design and implement better networks to support more efficient workflows for end users.

Even though SD-WAN provides the foundation for greater speeds, it also helps to better govern how you manage your traffic. SD-WAN can automate how you route different types of traffic. For example, critical applications with high-volume usages, such as video conferencing, should be routed on the fastest roads versus file backups which can be directed to slower pathways.

SD-WAN also enhances your visibility and allows for control from one centralized location. This allows a network administrator – and even machine learning – to automate tasks from one place and apply those consistently across the entire network, rather than implementing rules on a device-by-device basis.

SD-WAN is actually a powerful tool that goes well beyond improving network performance for the users of cloud applications. SD-WAN actually changes the way cloud-connected networks are designed, deployed and managed.

Let’s zoom-out and think from the perspective of system-level management. Returning to the commute metaphor, some roadways are reserved for cars and light trucks; no semi-trailer trucks allowed. Expressways and freeways also have special lanes for vehicles that carry more than one person. Some of the trains that travel at peak hours stop only at stations where large numbers of passengers get on or off.

The point is that traffic management—whether for roads, trains or networks—involves trade-offs. Priorities need to be set and applied as policies. SD-WAN automates the implementation of policies governing performance and security for applications, users and sites.

For example, latency-sensitive traffic, like VoIP and web conferences, should always be steered onto the fastest and most reliable network paths. File back-ups can be assigned a lower priority as they are rarely time-sensitive and can clog network links. Also, certain classes of confidential application and user traffic should be sent only via the most secure network connections.

Implementing policies on cloud-connected networks using legacy management tools is an error-prone, labor-intensive exercise because it is typically done with command line interfaces on a device-by-device basis. In contrast, SD-WAN centralizes visibility and control into a single, point-and-click management console.

With automation, a network administrator can create a new policy in a few minutes and apply it instantly with consistency across the entire network. How’s that for efficient traffic management?

Many workers have transitioned to working from home, and a fair share of businesses do not intend to return everyone to the office on a large scale. As we transition to an increasingly hybrid cloud, multi-cloud environment, full of IoT devices, SD-WAN provides the necessary infrastructure to continue supporting workers, regardless of where they plan to work. Think of SD-WAN as your neighborhood-friendly, worldwide traffic super-router, the best of its kind!