Finding Opportunity in the Internet of Things

Monday, August 15, 2016 | By Seth Robinson
CompTIA’s latest research on the Internet of Things (IoT) finds a field that is ripe with opportunity. For the IT channel, this trend will require a solid understanding of the ecosystem that allows extension of existing lines of business. 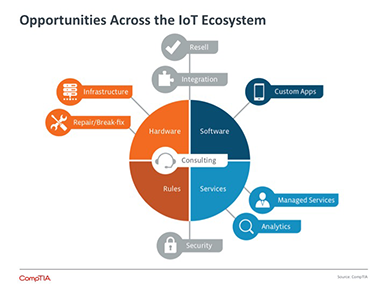 CompTIA’s latest research on the Internet of Things (IoT) finds a field that is ripe with opportunity. We have surveyed this topic for the past couple years and this year we did a deeper dive since momentum around IoT has continued to grow. For the IT channel, this trend will require a solid understanding of the ecosystem that allows extension of existing lines of business.

For the channel, the feeling towards IoT never meant as much anxiety as the feeling towards cloud. IoT benefits from following after cloud and being built on cloud concepts, and channel firms approach the topic with confidence having navigated through cloud in the recent past. Thirty-nine percent of channel firms have a significantly more positive view of IoT than they did a year ago, and 36 percent have a slightly more positive view. Another 21 percent have not changed their opinion over the past 12 months, and this certainly includes firms that were bullish on IoT to begin with.

Of course, a positive outlook is mostly tied to revenue opportunities. There has been a big jump in IoT revenue – last year, only 8 percent of channel firms surveyed said they had already made money from IoT offerings; this year, that number is up to 23 percent. Large firms (those with 50-plus employees) are making the most headway. Thirty-six percent of large businesses are already making money compared to 15 percent of medium-sized firms (20-49 employees) and 15 percent of small companies (less than 20 employees).

What exactly do these offerings look like? One critical characteristic defines most of them – they do not span every area of the IoT ecosystem. The IoT ecosystem is complex, composed of hardware, software, rules and services built on top of the foundational components. Outside of early consulting, which will necessarily touch on all four areas as strategy is defined, channel efforts tend to focus on one or two areas. This makes sense; initiatives of this magnitude are unlikely to come in a box, and end-users will have to utilize a range of vendors and partners to build their solutions.

Channel firms, then, can extend their current capabilities as they branch out into IoT. Their efforts might focus on hardware, such as infrastructure sales or break-fix. Those partners that have built development skills will find success on the software side, customizing client software or building new apps for visibility and control of connected devices. The services sector will continue to thrive, with analytics providing new insights from new data and managed services keeping the whole architecture running. Finally, security will keep growing as a priority, and partners that dive into the rules and regulations surrounding IoT will help keep their clients compliant in an ever-changing environment.

The Internet of Things started off with a few strikes against it. The name didn’t necessarily inspire confidence, the examples left something to be desired (zombie refrigerators, anyone?) and the previous trends of cloud and mobility had set a precedent that was tough to follow. But the potential benefits that can come from connecting our physical world to the Internet are truly remarkable, and channel firms have a great opportunity to extend their portfolio into this new space.