T he concept of ‘confidence’ elicits many reactions. Some immediately jump to over-confidence and the resulting obnoxious or risk-taking behaviors that accompany it. Some may think it terms of athletes where an individual may get rattled and lose confidence in his or her ability to perform. Still others may see confidence in terms of well-being and emotional intelligence. One facet of confidence often overlooked is its role in career pathways, specifically as it relates to careers in information technology (IT). This CompTIA research study of 1,000 18- to 34-year-olds explores the confidence gap and what it means to the tech workforce pipeline.

Confidence gap more prevalent than commonly acknowledged
The data suggests the confidence gap is not an isolated issue, but rather a factor affecting large segments of young people (age 18 to 34 in this study), that may be considering a career in information technology. Fully 7 in 10 of these individuals cite confidence as a factor that contributes to discouragement, which may hinder or thwart altogether someone taking the first step towards a career in technology.

Confidence gap encompasses a number of real and perceived barriers
In the context of this brief, the confidence gap can be thought of as the sum of fears and concerns affecting an individual’s decisions or perceptions of pursuing a tech career. Among survey respondents, the confidence gap component cited most often was concern over lacking certain skills, such as math or science skills. Relatedly, the fear of starting too far behind ranked second, followed by the fear of failure - starting something and not being able to finish it.

Lack of encouragement complicates confidence gap
Millennials catch a lot of flak. It’s not uncommon to see stereotypes portraying Millennials as too coddled, too entitled, or too narcissistic. Beyond the ridiculousness of generalizing across 71 million individuals, the data suggests otherwise. Overall, less than half (44%) of 18- to 34-year-olds report receiving encouragement from someone in their life, such as, parents, teachers, guidance counselors, etc., to consider pursuing a career in technology. While this is a case of correlation not implying causation, it is notable that individuals that did cross over into the consideration camp for a career in technology report receiving encouragement at significantly higher rates than those that have not, 74% vs. 18%.

Career pathways may become even more confusing and precarious due to automating technologies
Most young adults report following stories on how robotics, artificial intelligence, and automating technologies will impact the workforce. As expected, there is a level of concern. Not surprisingly, views are mixed as to perceptions of what it means to them personally and to the future of work. 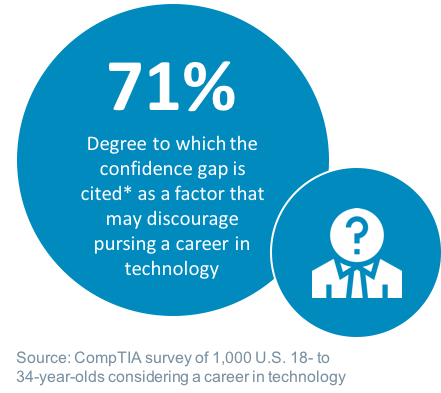 DELVING INTO THE CONFIDENCE GAP

On the surface, the path from childhood to adulthood to the workplace is well established. Primary and secondary schooling, followed by post-secondary education or training, and then the first rung of the career ladder. Expectations of students, parents, education institutions, and employers rest on this model of linear progression. And yet, our understanding of how many individuals get from point A to point B contains far more blind spots than what one would expect of an advanced economy. Relatedly, the underdeveloped sense of knowing what levers to pull and when to pull them to help someone along contribute to a less than optimal talent pipeline.

Putting aside the skyrocketing cost of college, which is obviously an immense issue to tackle, CompTIA reveals a number of other factors deserving of attention. Among young adults considering a career in technology, 42% express concern over feeling ill-prepared because of insufficient exposure to technology in high school. A similar percentage cite lack of mentors and guidance in how to go about pursuing a career in technology as a factor. Among those living in small cities, towns, or rural areas, 1 in 3 report being discouraged by the perceived lack of tech job opportunities should they complete their training.

The confidence gap encompasses many of these elements. Overall, 51% of the 18- to 34-year-olds CompTIA surveyed cite the confidence gap as definitely or probably a factor in contributing to discouragement in pursuing a tech career. Among those actively considering a career in technology, the net rate jumps to 71%. This suggests that in the abstract, confidence gap concerns are modest, but when an individual comes face-to-face with decisions and actions, these concerns become real. This is further confirmed by those actually working in a tech occupation where three-fourths report experiencing or observing a confidence gap at some stage in their career path. 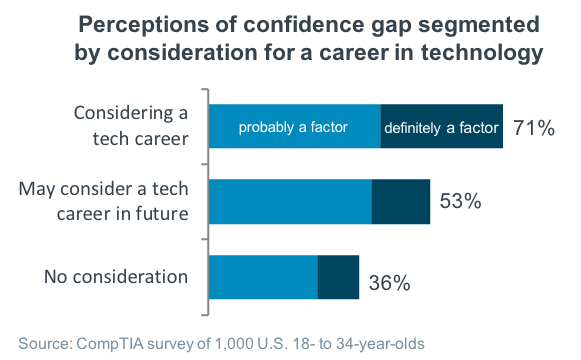 Interestingly, there are few differences in confidence gap perceptions among men and women. The same goes for education and location - no significant differences. There does appear to be a slight income effect, where those in households earning less than $50,000 report a confidence gap about 10 percentage points higher.

As noted previously, the confidence gap is not one thing, but rather the sum of fears and concerns affecting an individual’s decisions or perceptions of pursuing a tech career. Topping the list is concern over skills deficiencies in areas such as math or science. While there are certainly some tech occupations that involve the intense use of math, such as data scientist, the reality is that most entry points for a career in tech are not math-dependent.

A similar reality check is needed in the use of the 4-year degree as the de facto price of entry into the white collar workforce. About 1 in 3 young adults acknowledge their fear of not being able to attain a 4-year degree and what it may mean to their chances of pursuing a career in technology. While some employers are starting to rethink their hiring criteria and groups such as CompTIA are working to promote the notion of ‘new collar’ technologist jobs that focus on skills-centered training and performance-based credentials, this facet of the confidence gap is unlikely to disappear anytime soon.

Similar to the confidence gap, it’s difficult to precisely quantify the impact of encouragement. While positive encouragement most likely helps, to what degree, if any, does the absence of encouragement have on young people? Given that males report receiving encouragement to pursue a career in technology at a rate 16 percentage points higher than females, it should be viewed as a call to action to address the stereotypes and other factors contributing to this imbalance. 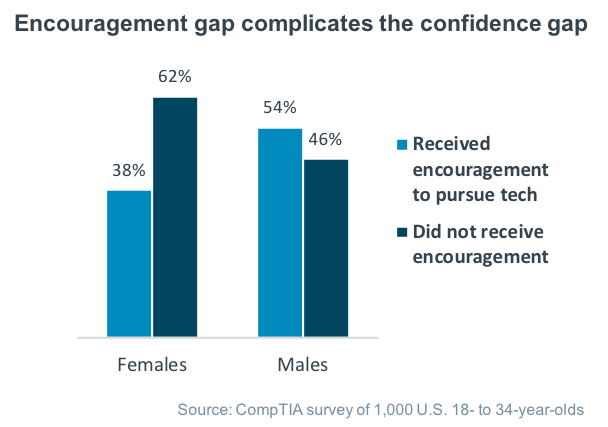 In the aggregate, 16% of 18- to 34-year-olds report they had considered pursing a career in information technology at one point. Based on U.S. Census population data, this translates to approximately 12.6 million individuals. Of course, with any self-reported data, the level of commitment may vary from “sounds interesting” to “intense dedication.” Because these individuals do not currently work in technology, it means some factor or combination of factors altered their career path. Perhaps they found their calling in another field, such as healthcare, teaching, or law enforcement; or perhaps a life event prompted a change of direction.

Even when accounting for the large numbers that self-select out of consideration for a tech career, it still leaves a sizable pool of individuals - likely numbering in the millions, that were unable to overcome an internal or external barrier.

When considering the pool of individuals currently considering a career in technology (20% or about 14 million) and those that may consider this career path in the future (24% or 17.4 million), the magnitude of the challenge comes into focus. In some ways, external barriers, such as the cost or availability of training, are easier to identify and address than internal barriers, such as the confidence gap.

For example, 64% of respondents in large or very large cities have considered, are considering, or may consider pursuing a career in technology. In comparison, a nearly identical 61% of residents in small towns or rural locales report the same level of intent. Although, it should be noted, these individuals currently use technology on the job at lower rates (see Appendix), so there may be a slightly higher element of aspiration with this group.

For more details on the concentration of tech jobs and employer demand across the country, see CompTIA’s interactive Cyberstates map. 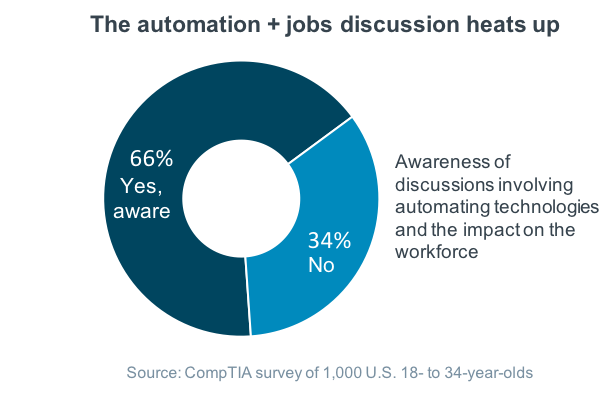 Discussions of the impact of robotics, AI, and automating technologies on the workforce are increasingly moving from the theoretical to the real world. This is not lost on today’s young adults. The majority of 18- to 34-year-olds are paying attention to news coverage and related ‘buzz’ surrounding where things may be headed.

Given some media reports have been downright apocalyptic, with headlines screaming “the robots are coming for your jobs,” it’s not surprising many young adults are on edge. For 1 in 4 young adults, the potential for job displacement is especially concerning, while nearly half acknowledge being somewhat concerned over reports. According to the data, this sentiment holds steady across location, age, gender and income.

To date, 16% of young adults report knowing someone personally that lost their job to automation. This undoubtedly shapes views, but there are a number of nuances to the story. When asked about notable examples of automation from the past 25 years, such as ATMs or online travel booking, respondents overwhelming rate the positives outweighing the negatives. For more recent examples, such as autonomous vehicles, opinions tilt towards the negatives slightly outweighing the positives. For this example, there is a notable income effect, with those in households earning less than $50,000 expressing more intense opposition. See Appendix.

When asked to assess the degree to which their current job could be automated, few (12%) believe most of their job could be replaced with technology. Increasing the time horizon to five years yields roughly the same response (15%), which suggests many individuals are still trying to understand the many variables at play. A slightly larger number (33%) acknowledge that some aspects of their job will likely be displaced due to automation. 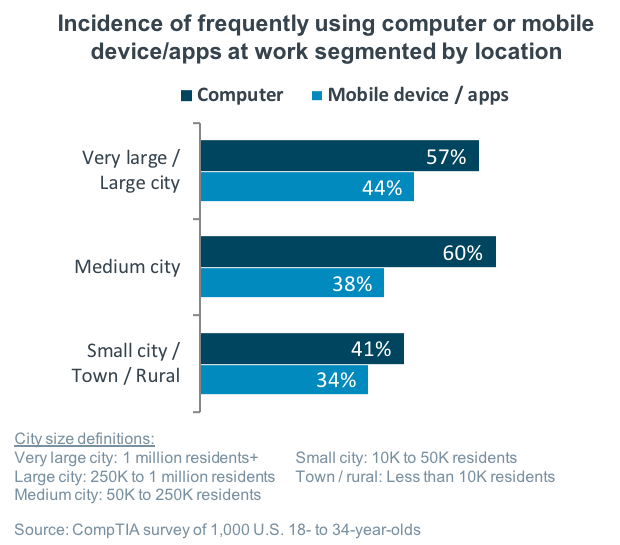 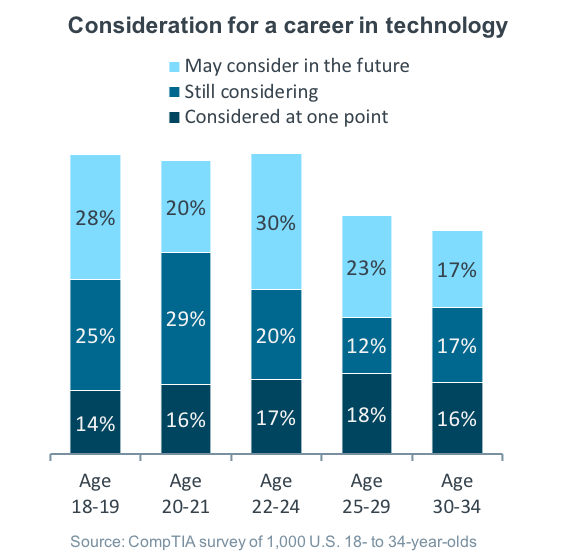 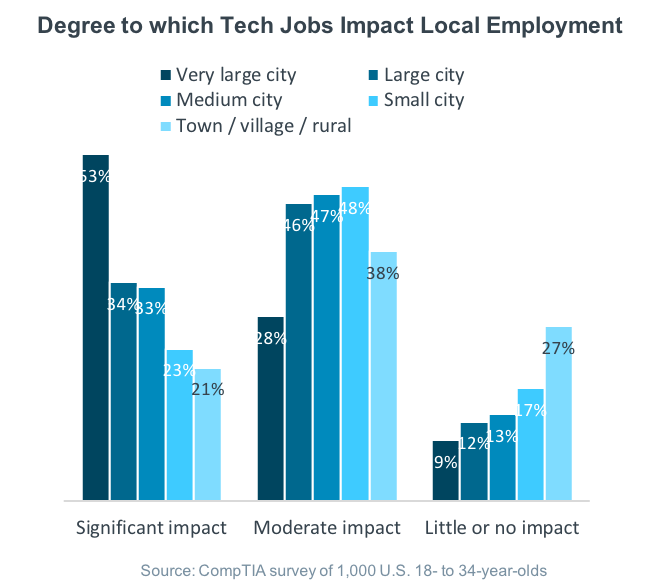 Note: this study did not include an ethnicity component. Similar to age, gender and other demographic variables, it is likely there are some differences by race. Future iterations of this research will build on key findings from this study, while exploring new areas, such as the relationship between the confidence gap and the underrepresentation of certain ethnic segments in the tech workforce.

This quantitative study consisted of an online survey fielded to 18-34-year-olds in the U.S. during July 2018. A total of 1,000 individuals participated in the survey, yielding an overall margin of sampling error proxy at 95% confidence of +/- 3.2 percentage points. Sampling error is larger for subgroups of the data.

CompTIA is responsible for all content and analysis. Any questions regarding the study should be directed to CompTIA Research and Market Intelligence staff at [email protected]. CompTIA is a member of the market research industry’s Insights Association and adheres to its internationally respected code of research standards and ethics.