Technology plays a pivotal role in the lives of teenagers. From entertainment and staying in touch with friends to supporting learning in and outside of the classroom, it is not an exaggeration to say technology is an extension of their being. The latest research from CompTIA confirms these points, as well as revealing a growing interest in information technology (IT) careers. The increasing Interest is encouraging, but could it be even higher? Perceptions of careers in technology are largely positive – among both girls and boys, but information gaps undoubtedly play a role in discouraging segments of students from pursuing a career in technology.

Digital natives love affair with technology continues
Technology is interwoven in the lives of teens today and there is near universal acknowledgement of the fact that they like/love technology.  Not only do they profess a love of technology but they are frequently the first point of call for parents/family in need of assistance or help troubleshooting a technology problem.

Perceptions of careers in information technology (IT) are generally positive, but challenges persist
Teenagers in the 13-17 age range see IT careers as being lucrative with the opportunity to do creative, innovative work. Teens also think that working in technology means the possibility to work in an appealing work environment with smart people and plentiful jobs. Moreover, with the staggering cost of higher education, students are increasingly considering the alternatives. Just about a quarter of respondents (26%) in the research are aware of and cite the availability of pathways into IT careers that bypass the traditional 4-year college degree as appealing.

Despite these positives, there are a number of offsetting negative perceptions. Nearly half of teenagers are concerned that careers in IT could be isolating, with long stretches of sitting alone in front of a computer all day. Girls more than boys have this perception.

Interest in IT careers is on the rise, especially among girls
There is growing interest in careers in technology and teenagers today are more open to the possibility of considering a career in the space. Since 2012, net interest has increased by 10 percentage points, according to CompTIA research. When presented as specific occupations, such as working with robotics or designing apps, interest is even higher.

While the trend is heading in the right direction – which is critically important given a shortage of IT workers in many areas, it must be acknowledged that many young people who could be candidates for pursuing a career in IT will fall by the wayside. Some of this can be attributed to information gaps. While most schools provide some type of information or career guidance for IT jobs, nearly 3 in 10 do not provide anything, according to the students in the study. 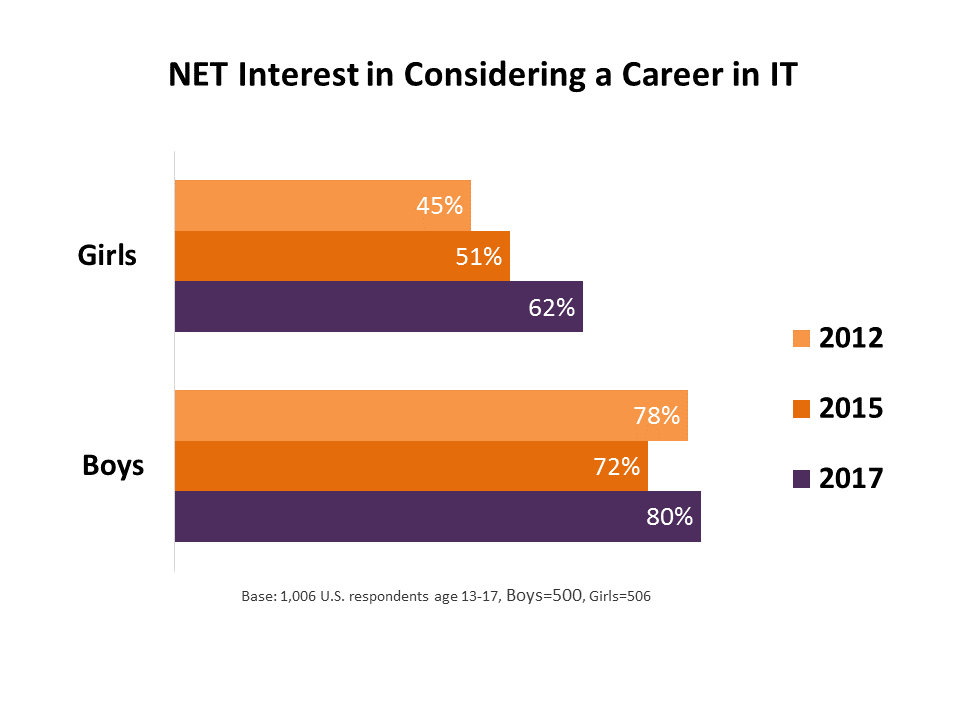 Teens Affirm Their Love of Technology

Technology is an integral part of the lives of teens today and this trend is very consistent with what has been seen in previous iterations of this research in 2012 and 2015. The vast majority go so far as to say they ‘love’ technology – this is slightly more pronounced among boys (74%) when compared to girls (65%).

The data indicates love of technology is consistently high across ages, regions, and race. (See Appendix for details) 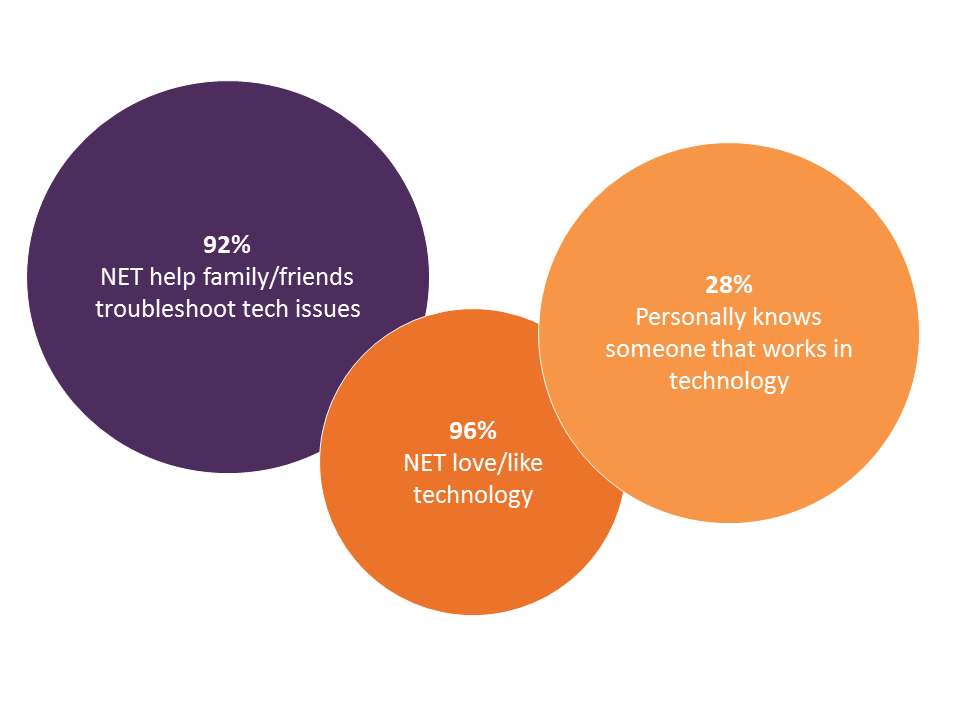 Teens also realize that the skills they gain from using technology are eminently transferable to future careers – more so with basic computer skills or using apps when compared to coding skills. Confirming other research in this area, girls find more value in social media skills. More boys than girls believe that coding has applicability in future jobs.

Interestingly, data skills rate relatively high. While most students gain exposure to using data and some degree of data analysis through their high school years, it’s impressive to see so many make the leap ahead in anticipating the importance of data skills to future endeavors. 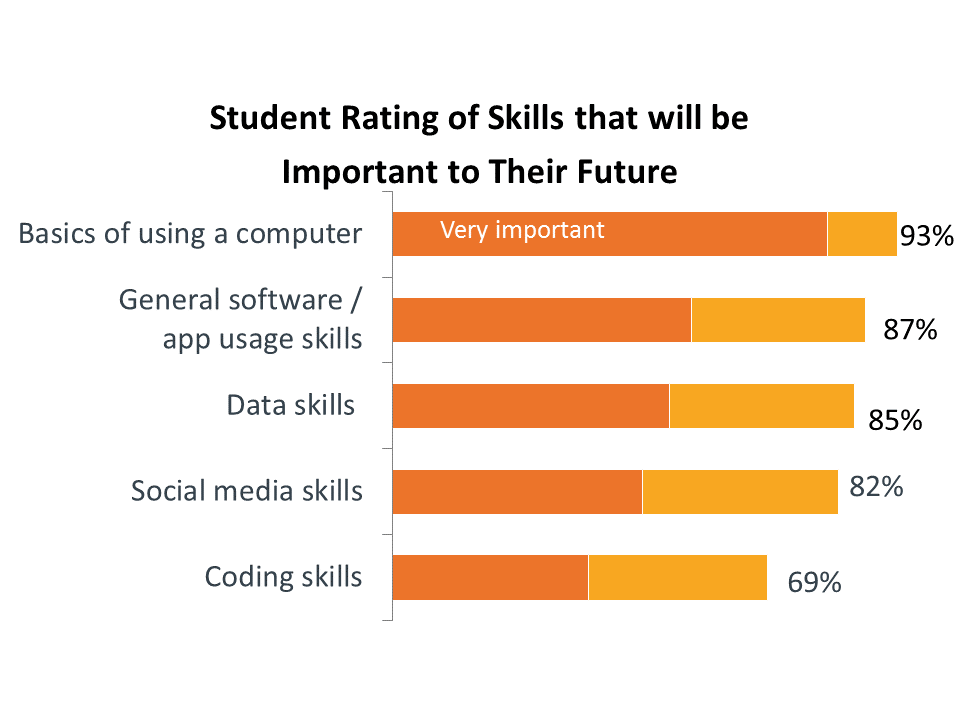 Perceptions of Careers in Information Technology

An analysis of what teenagers think of jobs in technology reflect both largely positive and some negative perceptions. Chief among the positives is the perception that jobs in IT pay well and the potential to do creative, interesting work on innovative ideas. The opportunity to use technology to make a difference and help people is also cited by the majority of teenagers. Many of these positive perceptions are very consistent with what teenagers thought in previous iterations of this study. There are also no notable differences between what teenage boys and girls note when it comes to positive aspects of working in a technology job.

To a lesser extent, there is a perception good math and science skills are a pre-requisite for an IT career and that the work is difficult and complicated.

Some perceptions change as students get older such as believing that working in IT provides the opportunity to use technology to make a difference or the availability of tech jobs likely because they have had access to more information as they get closer to making decisions about college/potential career paths. 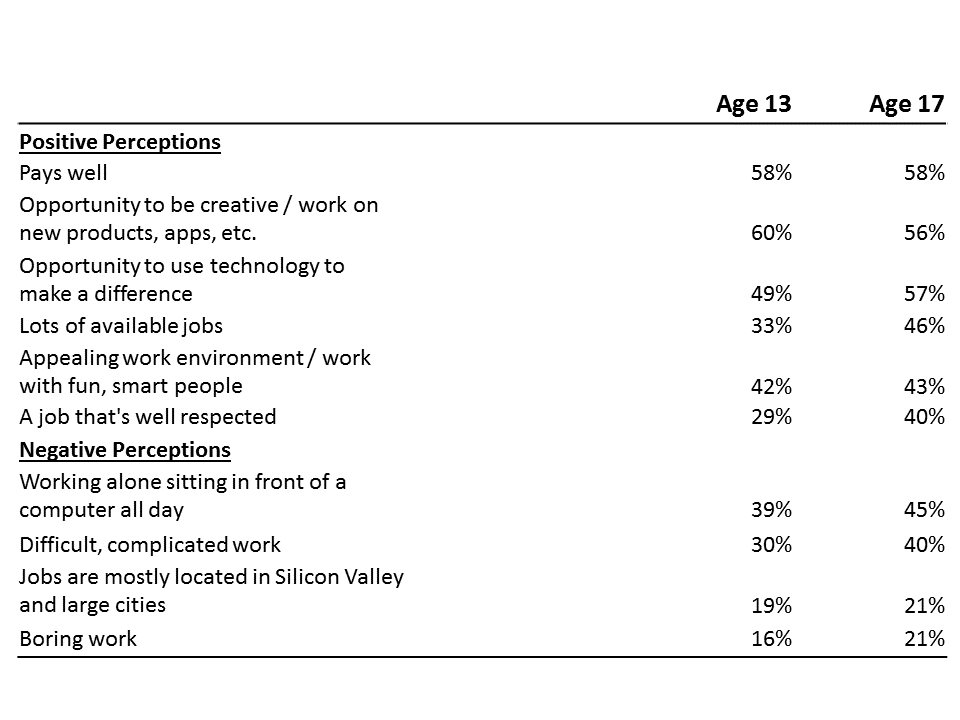 Information Sources for IT Careers

The sources that can be used to communicate to students about IT careers are teachers or the career counselor in school. The majority of students in our sample look to schools to provide information on potential career options. Boys (41%) more than girls (33%) find YouTube videos with career guidance useful.

Teens tend to look to people in their close circle, family or people who they know that work in the industry as reliable sources of information. This might represent a problem because less than 3 in 10 (33% of boys and 24% of girls) know someone that actually works for a technology company or has a job in technology. The solution might be to provide more job specific information (along the lines of a day in the life of IT workers in various jobs) to bridge the gap of not knowing someone who can provide information on the specifics or the first hand information that teens might be looking for.

The first hand experience that teens seek could also come from apprenticeship programs or on-the-job exposure to different IT career options.

The data suggests that there will be more than 1 million IT job openings due to growth and replacement needs in 2024 (see Appendix for details) underscoring the need to understand teens perceptions of IT careers. 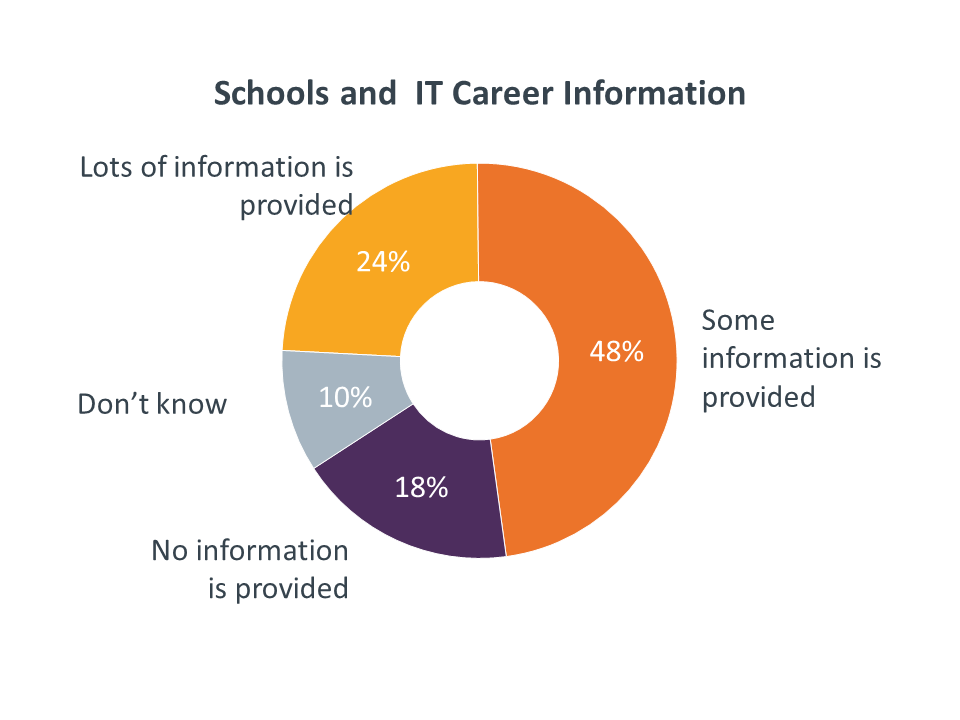 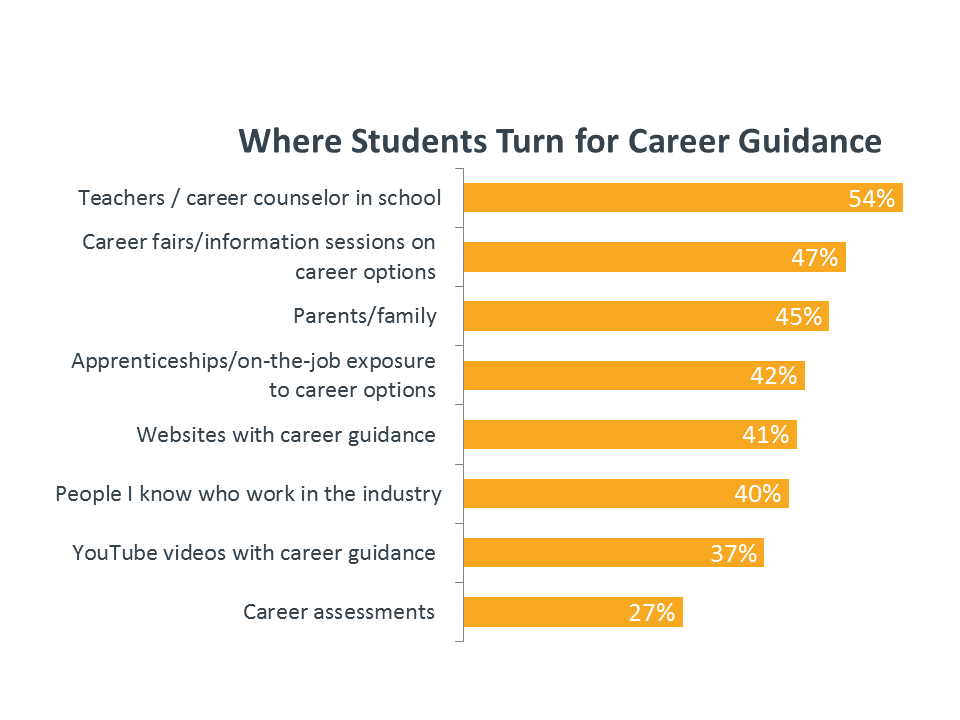 Four out of 5 teenagers have given some thought to potential future careers. About half say they have a pretty good idea of what they want to do while the other half say they are considering a number of options. Seven in 10 teenagers are open to the possibility of a career in the IT arena. This represents an uptick in interest in IT careers – in 2015, 62% said they were interested in an IT career. The increasing interest in IT careers is likely driven by rising interest among girls.

While the growing interest in IT careers is positive, it could likely be higher. Some of this might be attributed to the lack of information about IT careers – less than a third know someone who works in IT and it is noteworthy that 45% look to parents/family when trying to learn about career options. Programs such as those from the Creating IT Futures, FUSE and TechGirlz are examples of efforts aimed at bridging the information gap when it comes to IT career guidance.

Teens Ponder the Future of Work

While technological displacement and automation has been a facet of life since the industrial revolution, recent advances in artificial intelligence have raised new questions – and new concerns. In addition to the usual stories about the wonders of autonomous vehicles, robotics, or virtual reality, media outlets, governments, and other institutions increasingly ponder the impact to the workforce.

These discussions are not lost on young people. Six in 10 teens report hearing about the automation trend and a majority are concerned that it might mean fewer jobs for them in the future. A third report not being concerned and expect future technologies are unlikely to replace human jobs. Older students are more aware of this trend and are more concerned about automation. Being closer to graduation and facing the working world might explain the reason for increased interest in the potential impact of automation (see Appendix for data by age). 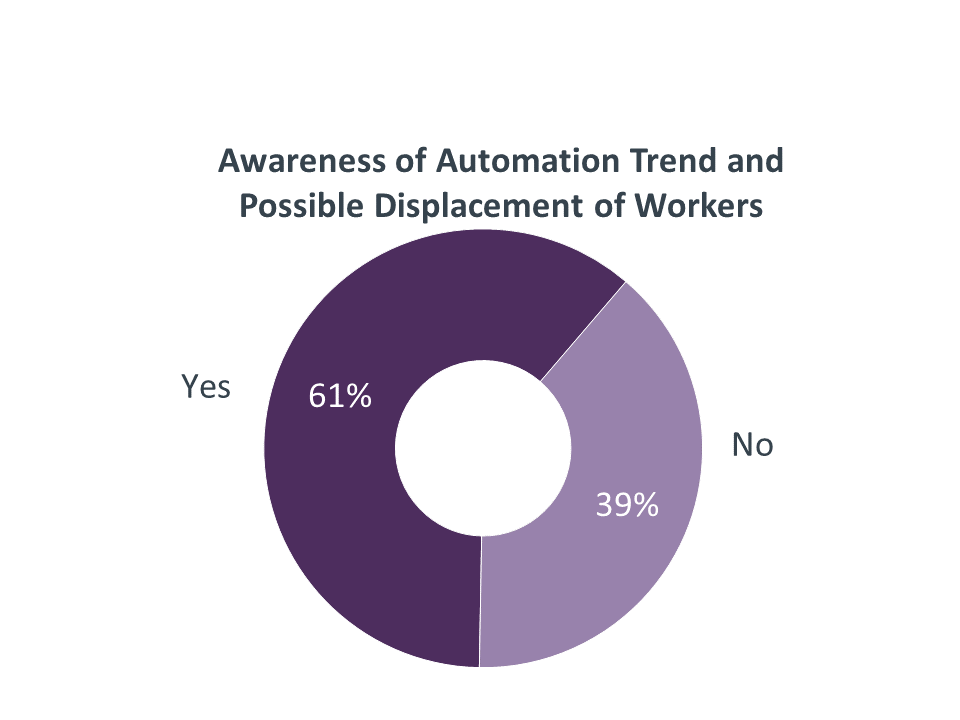 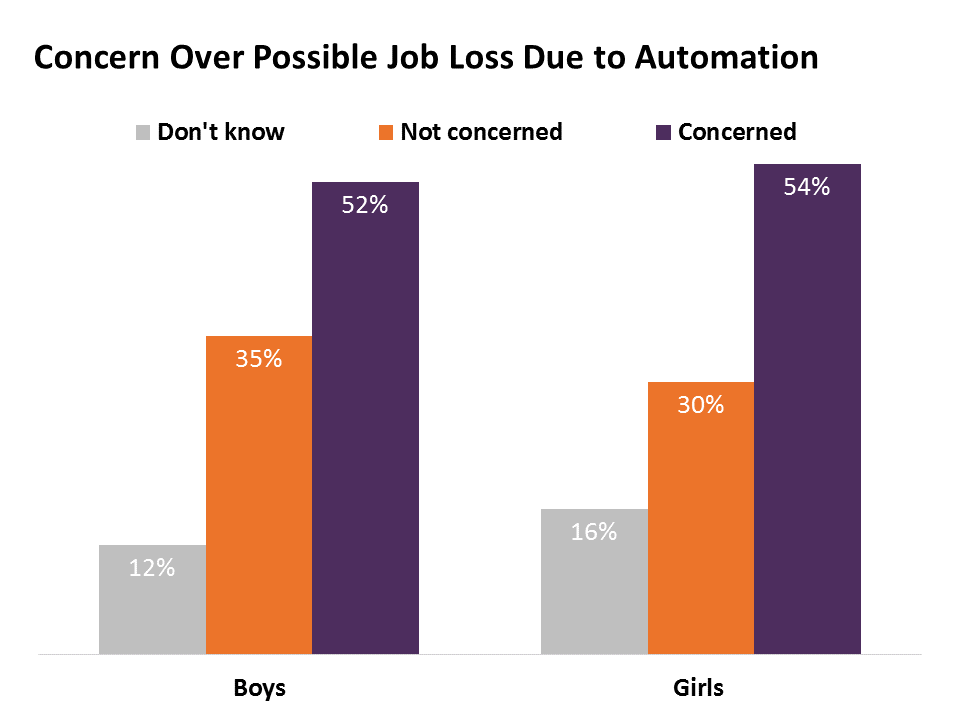 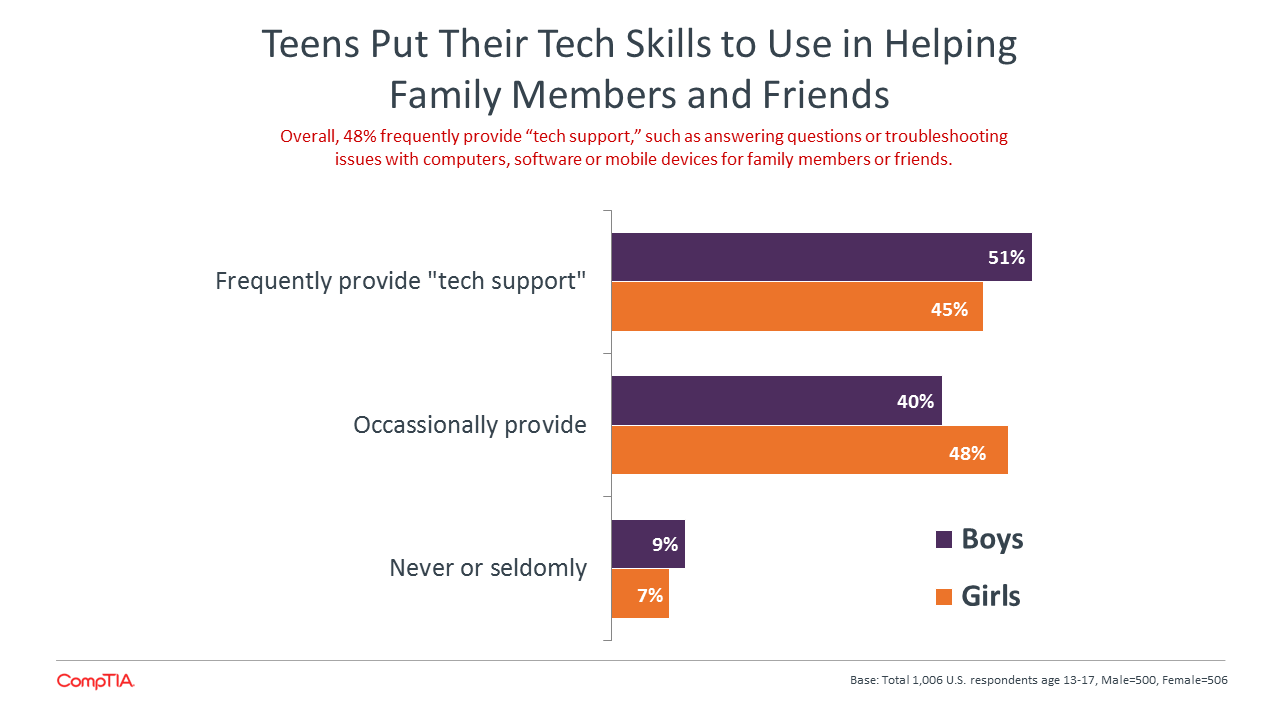 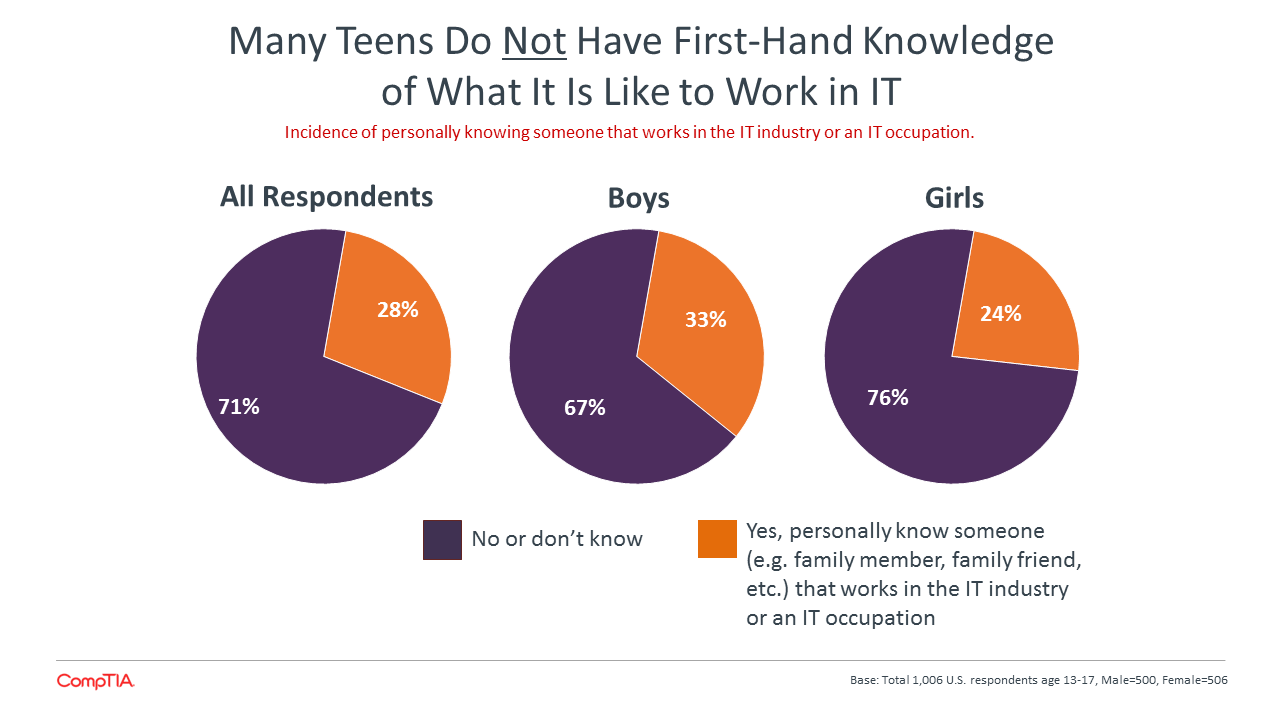 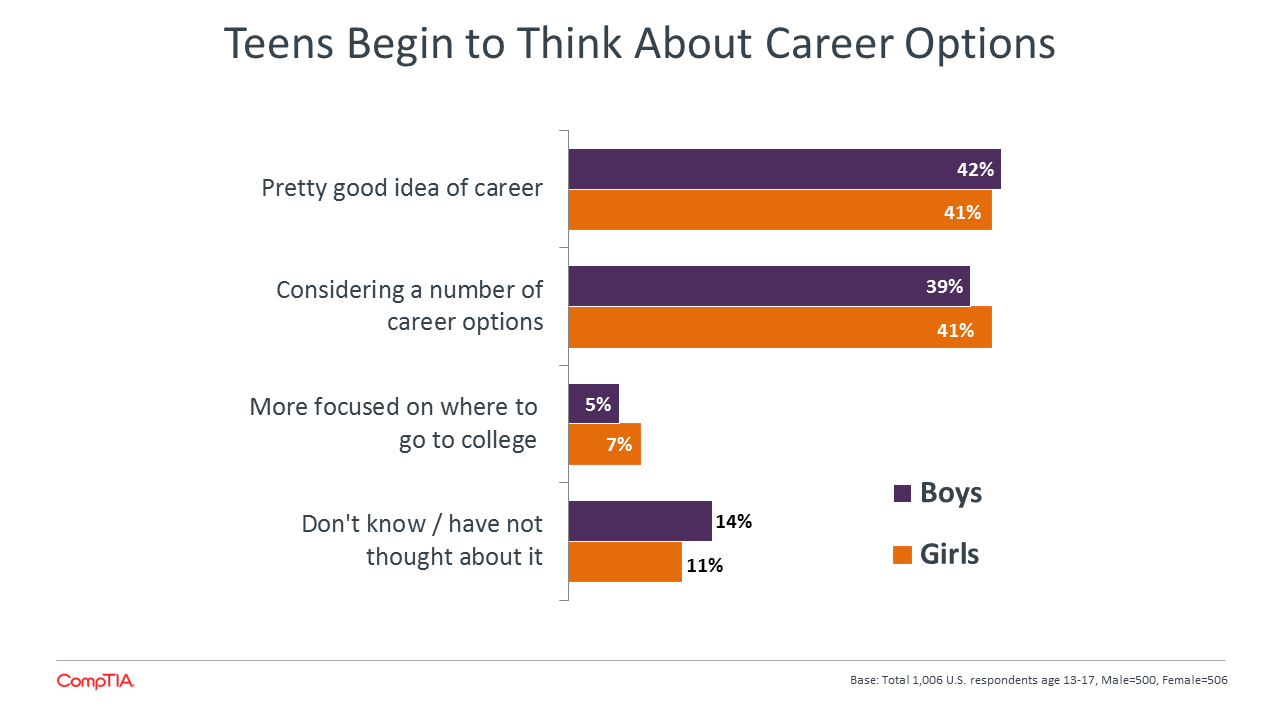 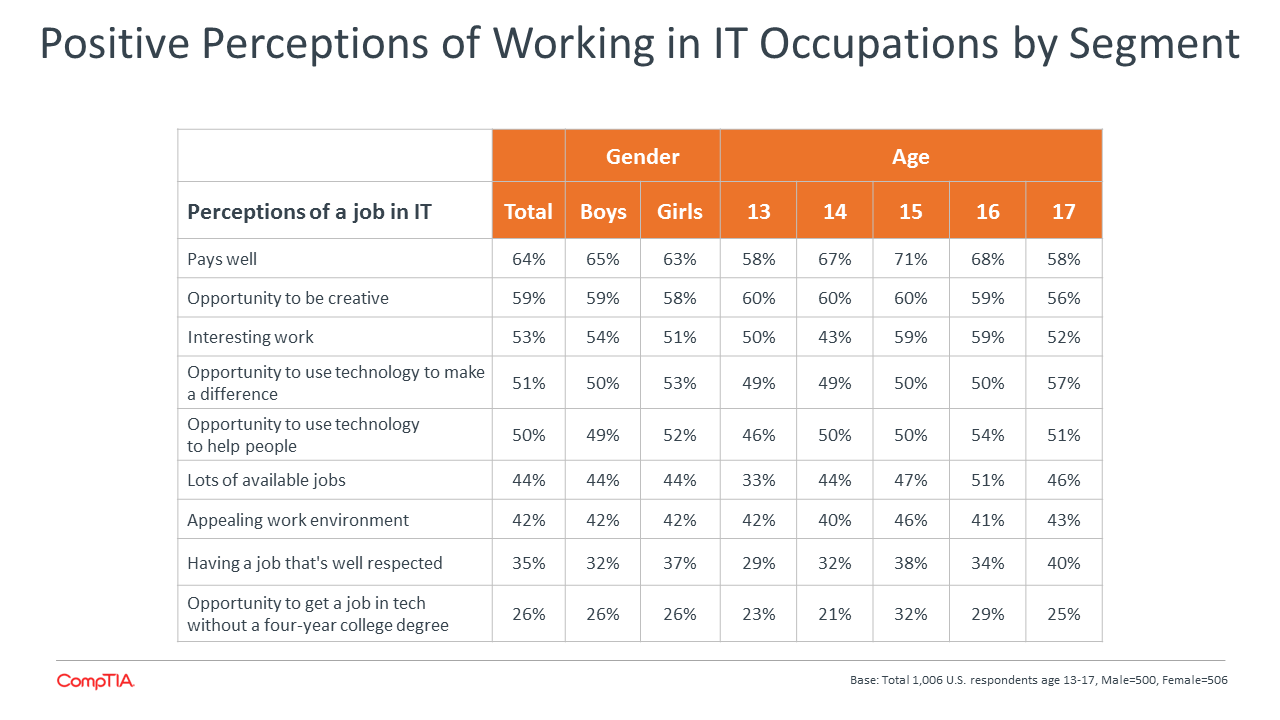 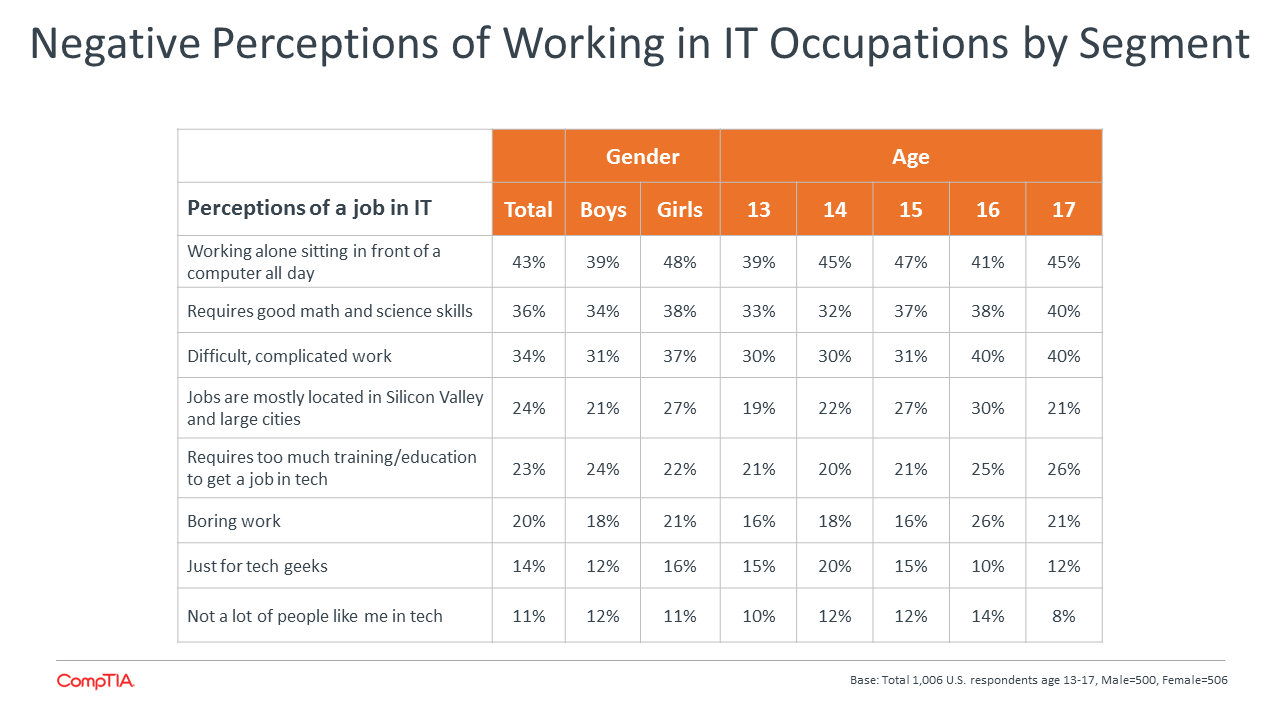 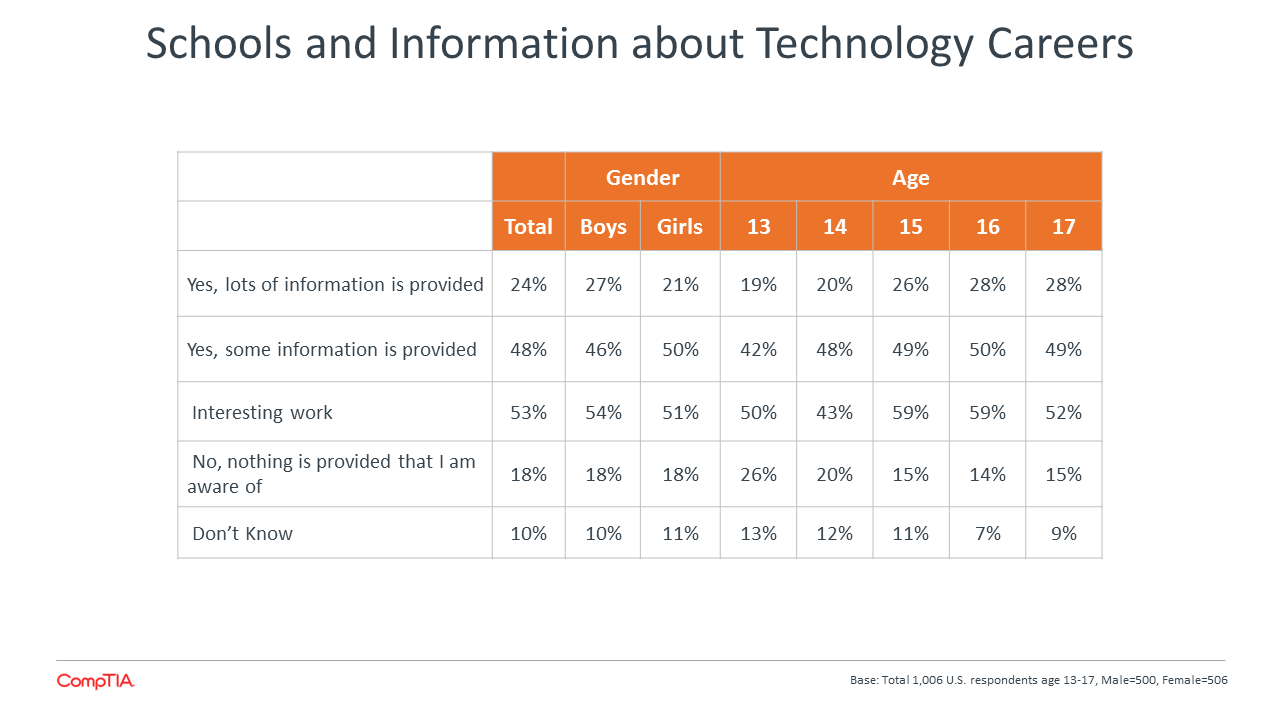 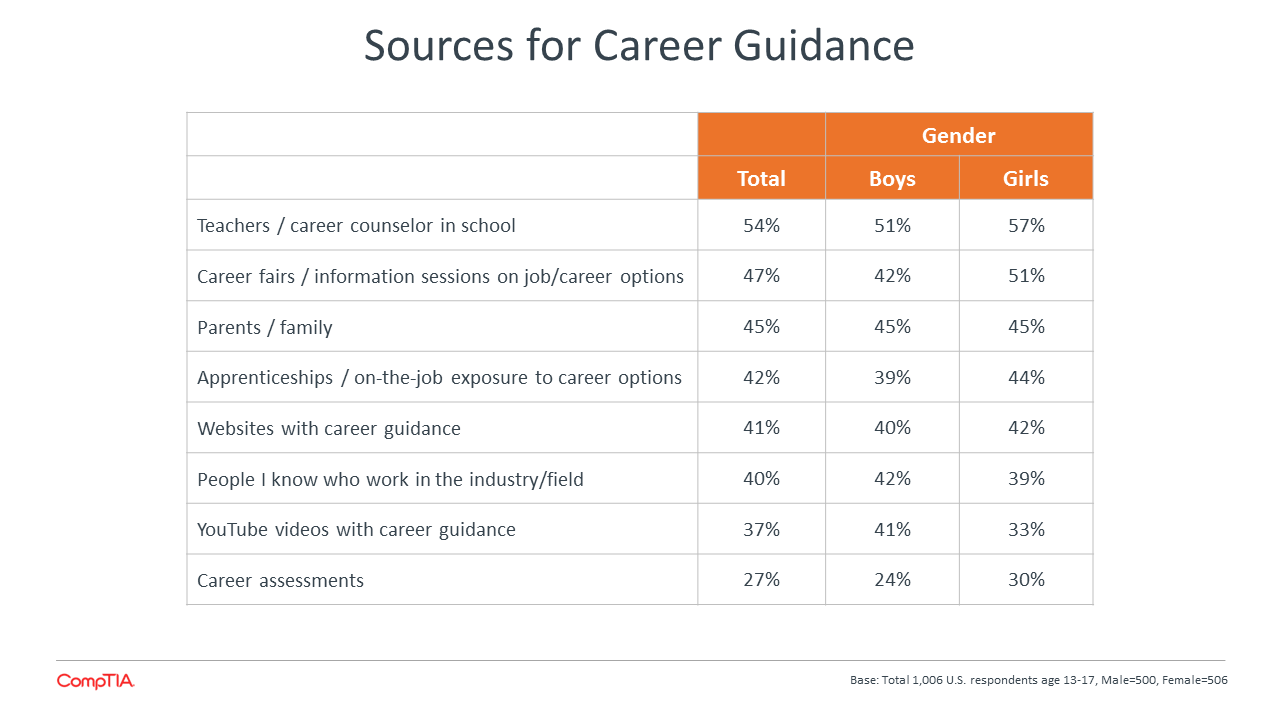 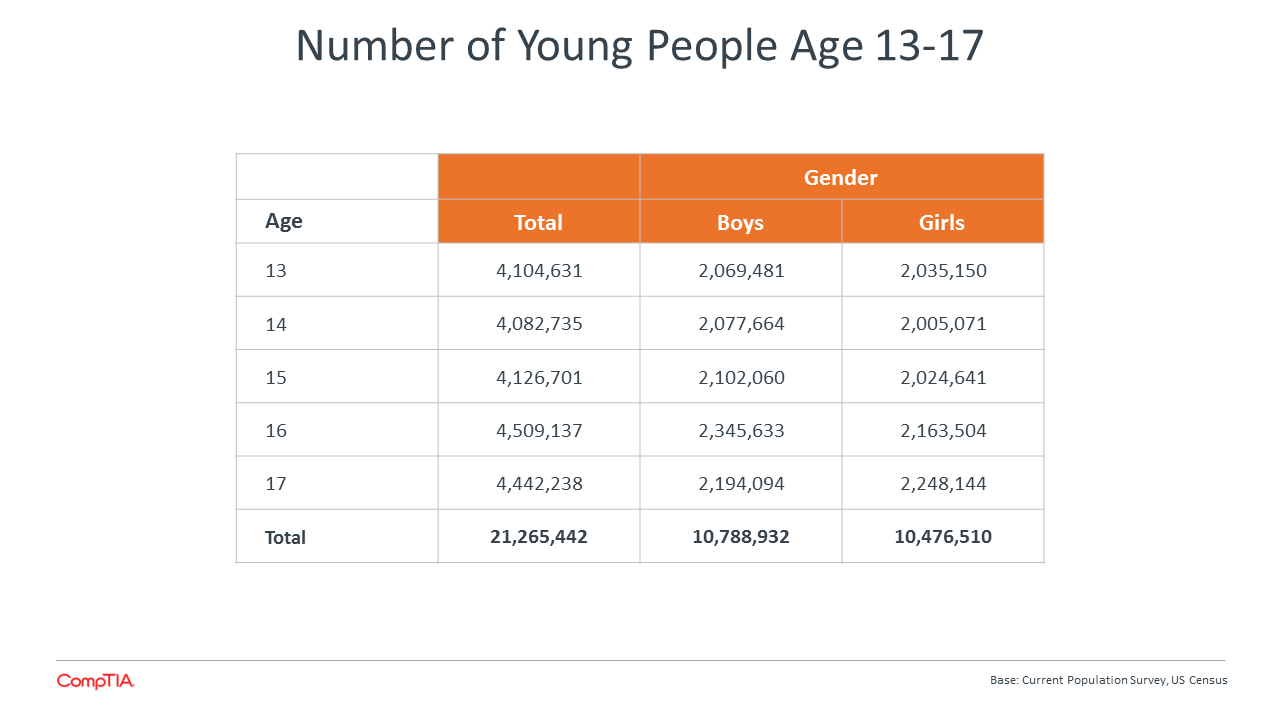 CompTIA’s Youth Opinions of Careers in Information Technology study explores what young people (ages 13-17 years) think about a job in the technology industry and the prospects of considering a career in IT.

The quantitative study consisted of an online survey fielded to 13 to 17 year old respondents during November 2017. A total of 1,006 respondents participated in the survey, yielding an overall margin of sampling error at 95% confidence of +/- 3.2 percentage points. Sampling error is larger for subgroups of the data. Prior year surveys had similar sample sizes and margins of error.

CompTIA is responsible for all content and analysis. Any questions regarding the study should be directed to CompTIA Research and Market Intelligence staff at [email protected].

Creating IT Futures, the charitable arm of CompTIA, is taking on this workforce challenge through research, program development and partnering. The organization creates on-ramps for more individuals, including young people, to prepare for, secure and succeed in IT careers.