Friday, February 8, 2019 | By Emily Matzelle
What’s happening on an international level is very impactful to those in the technology industry, according to Nicole Bivens Collinson, President of International Trade, Government Relations and Federal Affairs at Sandler, Travis & Rosenberg, P.A. Bivens Collinson shared her thoughts during the Capitol Hill Speakers Series.

What’s happening on an international level is very impactful to those in the technology industry, according to Nicole Bivens Collinson, President of International Trade, Government Relations and Federal Affairs at Sandler, Travis & Rosenberg, P.A. Bivens Collinson shared her thoughts during the Capitol Hill Speakers Series, part of the CompTIA DC Fly-In that took place in Washington, D.C. Feb. 5-6. 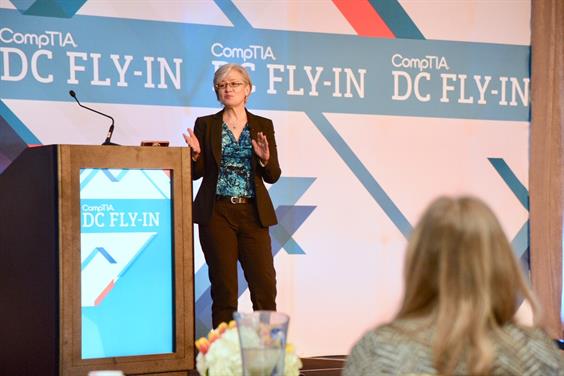 With more than 30 years of experience in government, public affairs and lobbying, Bivens Collinson provided DC Fly-In attendees a realistic snapshot view of what’s happening right now with regards to trade, how to mitigate tariffs and specific pieces of legislation the industry should keep its eye on.

Bivens Collinson began by addressing the hard stance the U.S. is now taking on some of our trading partners – particularly China – after withdrawing from the Trans-Pacific Partnership (TPP) two years ago. She emphasized that fact that constitutionally, governance of tariffs rests with Congress.

“Congress is the one who negotiates raises and lowers tariffs. Over the years, Congress has given some of that power to the President in certain situations when specific issues are perceived as unfair to the U.S.” she said.

The timing of President Trump’s State of the Union address (held on the evening before her remarks) proved very timely to this discussion. During the address the President asked Congress for support on the United States-Mexico-Canada Agreement (USMCA) and tariff powers. Bivens Collinson emphasized the importance of these free trade agreements coming down the pipe as they will affect the technology industry with regard to how data is treated, cross border data flows and more.

“Do I think the USMCA is going to pass this year?” she stated. “The answer is yes.”

Bivens Collinson said that she believes tariffs are here to stay.

“I hope that in three weeks’ time, you’re able to look back and say that I was dead wrong. But I don’t think the tariffs are going away. I think we’re in it for the long haul,” she said. But, if you or your clients are dealing with tariffs, she said there are ways to mitigate.

For example, in the tech industry, most products people are making are coming into the U.S. duty free. Now with the Section 301 tariffs, they may be facing a 10 percent or 25 percent tariff and it makes a big difference. However, Bivens Collinson advises to check the product’s classification.

“Because it came into the U.S. duty free, you never check to see how it’s classified,” she said. “Products evolve all the time and the tech industry moves very quickly. The product may be classified incorrectly.”

Another option is to implement partner manufacturing.

With multiple pieces of legislation coming, Bivens Collinson flagged a few that are worth tracking. Starting with a bill that aims to give the President more power. The bill says that if the President makes a positive determination then that has to come to Congress and if they don’t agree, they have to pass a disapproval resolution.

Another bill says that before the President can take action, he must send his intent to Congress and they have to approve before the action can be taken. Bivens Collinson said that this one may have some teeth.

In talking about Section 301 tariffs, she says that right now there’s not a process in place to try and get a product excluded from the third tariff list.

“If you don’t have a process because the product is unique and not made anywhere else but China, you can try to get it excluded. That doesn’t exist right now, but this bill is trying to put that into place,” she said.

During the State of the Union address, President Trump also talked about the ability to unilaterally impose tariffs on countries at the same rate at which they impose them on us. While the bill currently has 18 sponsors, Bivens Collinson admitted that she thought this would end up being a complicated mess.

Also, upcoming, is a miscellaneous tariff bill designed to give the opportunity for certain products with a certain value to be deemed duty free for at least three years. This is still in the works.

Finally, Bivens Collinson mentioned the proposed trade agreements with the EU, UK, and Japan all starting right now, as a great opportunity for the U.S. to get in and set rules and standards for new technology, data transfer and cross-border communications.

“You should look to those agreements to get your industry’s issues codified,” she said.

CompTIA filed comments with the Office of the U.S. Trade Representative with respect to the new trade agreements. You can view the documents below.