Monday, February 15, 2021 | By Joshua Walker
Learn how site reliability engineering (SRE) and DevOps work together to help you run operations at scale. 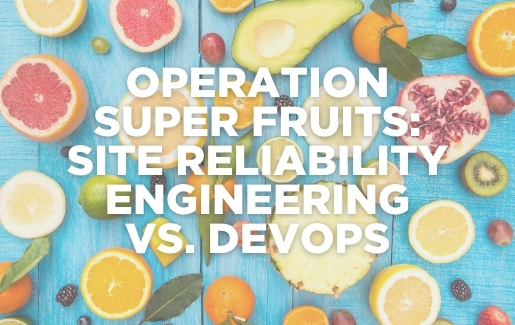 Running operations at scale has always been a fruit salad of uphill battles, especially in our expanding world of distributed teams across many geographic locations. We as an IT community are routinely reminded that if we continue to look at our IT operation as a cost center instead of the backbone of innovation, then we will not only be slow to improve but also miss out on transformative opportunities in the marketplace. Along comes site reliability engineering (SRE) and DevOps.

Pioneered by Google, site reliability engineering (SRE) is defined as the following by its founders:

“SRE is what happens when you ask a software engineer to design an operations team.”

SRE doubles as both a job role and an ongoing practice that fights operational issues with well-thought-out software paradigms and cutting-edge software tools.

7 SRE Methods You Can Implement

Although SRE is made up of a multifaceted role and practices, it also usually results in a cultural shift similar to SRE’s complimentary companion, DevOps.

In a nutshell, DevOps is the merger of methods, cultural doctrine and tools that increase an organization’s capability to deliver applications and services at both velocity and scale. This cultural evolution drastically enhances products at a break-neck pace compared to organizations leveraging traditional software development and IT management processes. This haste permits organizations to surpass customer expectations and heighten effectiveness in the marketplace.

5 DevOps Methods You Can Implement

If we think of SRE and DevOps as super fruits, there are similarities and differences. Like the saying goes: You can’t compare apples and oranges. While SRE and DevOps are inherently different, they are both good for us.

SRE and DevOps agree on the following:

SRE and DevOps differ on the following:

Better Consumed Together: Where Do You Go from Here?

Get the in-demand skills you need with CompTIA certifications and training solutions. Download the exam objectives to get started.