Private Servers, Pokémon, the Pixel and Russia: Tech News That Went Viral in 2016

Thursday, December 8, 2016 | By Natalie Hope McDonald
Tech news hit the mainstream in 2016, and terms like private servers and cyber-attacks entered the vernacular. Let’s look back at some of the most talked about tech stories of 2016 to try and predict what’s in store for 2017. 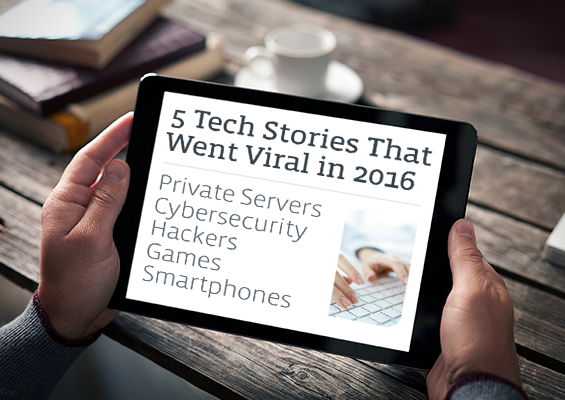 In a year defined by digital discourse, it’s no surprise that IT played a leading role in discussions spanning culture and politics. Not only have private servers and cyber-hacking gone mainstream, but so have smart devices for work, play and communication on the go. IT pros increasingly face the conundrum of how to secure data while taking advantage of the hot new features these gadgets promise.

Let’s look back at some of the most talked about tech stories of 2016 to try and predict what’s in store for 2017.

The infamous private server became a touchstone during the presidential election, catapulting IT security onto the world stage. Democratic presidential nominee Hillary Clinton faced investigations over a server she used in her home as Secretary of State. When it became known that Clinton reportedly conducted business on that server, the FBI launched its own investigation into the handling of classified documents. Although it found no wrongdoing, the FBI called the practice “careless.”

State Department Spokesperson Mark Toner aptly summed up the ongoing discussion around the state of digital communications at the highest level of government when he called for federal agencies to adapt “decades-old record-keeping practices to the email-dominated modern era” — something IT pros everywhere reiterate after each new cyber-attack.

The IRS Gets Hacked — Again

After one of the nation’s biggest data breaches targeted the IRS in 2015, the agency did away with its electronic PIN system — sort of. It removed the hacked system when it discovered the six-digit e-File PINs were less secure than everyone thought, after more than 700,000 taxpayer records had been compromised. Some experts call it a case of too little, too late, however, as cyber-criminals walked away with taxpayer IDs and Social Security numbers.

When the system was hacked a second time in February, a serious question loomed over the IRS’s handling of taxpayer data. The IRS reportedly blocked the automated bot — which attempted to penetrate the very portal developed to prevent these security breaches — and beefed up its security measures yet again. But not before another 100,000 PINs were stolen.

Users have been offered free Equifax identity theft protection for up to one year, along with new IRS ID numbers, and several federal audits have outlined the dangers and failures in IRS database controls. The story is, however, far from over, as the IRS seeks new ways to improve taxpayer security.

“Russia, if you’re listening, I hope you’re able to find the 30,000 emails that are missing,” President-elect Donald Trump said during a news conference in July, boldly challenging a foreign adversary to use cyber-terrorism against the former secretary of state.

The taunt, which Trump campaign officials later said was in jest, certainly caught the attention of cybersecurity specialists around the world, especially after it came out that the hackers who got into Democratic National Committee computer servers this summer may have been Russian.

“The U.S. intelligence community is confident that the Russian government directed the recent compromises of emails from U.S. persons and institutions, including from U.S. political organizations,” a joint statement from the Department of Homeland Security and the Office of the Director of National Intelligence on Election Intelligence said. “We believe, based on the scope and sensitivity of these efforts, that only Russia’s senior-most officials could have authorized these activities.”

Few expected Pokémon Go to rake in $23.3 million worldwide, but the smartphone app has reigned supreme on iTunes’ list of top free game downloads since it came out this summer. Using GPS technology, gamers collect Pokémon characters throughout an augmented reality.

The global gaming sensation has inspired conversation about technology, notably how and where it’s being used. While businesses may opt into the game, eagerly inviting gamers into their establishments, other venues have voiced concerns about how it leads users to play anywhere and everywhere. For example, the Holocaust Museum in Washington, D.C., had to remind gamers that it’s not an appropriate place to play Pokémon Go.

Even so, the app’s Halloween tie-in yielded a 133 percent spike in revenue, just as critics predicted that the game was losing traction worldwide.

Google released its first-ever smartphone — named Pixel — in October, creating a lot of buzz in the mobile technology category. The release marks a notable change to the company strategy. Rather than supplying software to manufacturers, Google built the device from the ground up to compete in a space dominated by Apple and Amazon.

The Pixel has all the features you’d expect from a smartphone, like a high-resolution camera, cloud storage and automatic updates, as well as Google Assistant, an artificial intelligence service that allows users to talk directly to the phone to get information and perform tasks.

By harnessing the power of one of the world’s most popular search engines, Google Assistant is giving services like Siri and Alexa a run for their money. And with 24/7 service provided by Google, plus a comparable price tag to Apple and Android phones, the Pixel has the potential to gain a whole new user base.