Thursday, March 31, 2016 | By Matthew Stern
An avid and enthusiastic learner, Chase Lucas first got A+ certified when he was only 11 years old. Now, at 17, as he continues to pursue the IT path with an eye towards a career in government-level cybersecurity, his certifications are mounting as quickly as his skills. 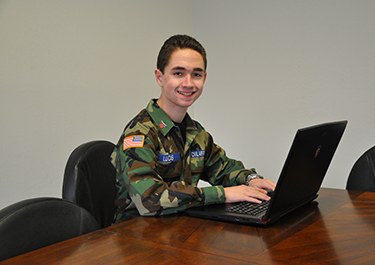 In kindergarten, Chase Lucas wanted to fly – and he wanted to do it for Uncle Sam. His interest in the field of military aviation was so deep, in fact, that his mother Debbie Lucas recalls him in those days introducing himself as “Chase Lucas, future Navy aviator.” His father Dan, to help his son develop his burgeoning interest in airplanes, taught him how to type in the magic words – www.airliners.net – to reach a website filled with aviation information. Interests change at such a young age, though, and instead of the website’s subject his focus ended up being the computer itself – the tool linking Lucas to that world of information – that captured his attention. His interest grew, and Lucas was soon recruiting his father – himself a network security analyst – to show him the ropes of IT.

“I sat him down and said, ‘Dad, you know, instead of buying a computer it’d be so much cheaper, and we’d get more experience if we could buy the parts and build a computer together.’,” Lucas said. “We ordered the parts online and we decided to build a computer.”

Lucas was still very young, but he was doing more than just daydreaming about his future profession. Lucas began self-studying for his first CompTIA certification, because, unlike some other certs, CompTIA’s offerings have no age limit.

In 2011, at the age of 11, Lucas walked into a local testing center with his father to take the first exam of the CompTIA A+ cycle. He walked to the reservation desk accompanied by his father, and, given that he was by far the youngest person in the room, the woman at the desk made a mistake that could perhaps be expected.

And when he passed the CompTIA A+ 701 test – then the standard exam – on his first try, the proctor noted that he was the youngest person she had seen succeed on it.

Now 17 years old, Lucas has not slowed down in his pursuit of an IT career or in his pursuit of CompTIA certifications. The certifications that he currently holds, in fact, have already played a huge role in his preliminary career steps. A home-schooled high school student, Lucas has been taking college courses in addition to his home workload and self-study. But the time he started taking classes at the College of Central Florida, he had already gotten his CompTIA A+ and CompTIA Network+ and was awarded college credit for having the certifications.

Lucas is now preparing to attend college full-time at Dakota State University, and he’s been earning certifications that are sure to help him when he gets there. In January, he passed the CompTIA Security+ exam. His father expected him to pass, but was nonetheless impressed with his son’s high score. “He was very proud,” Lucas said. Lucas also plans to get his CompTIA Linux+ certification before he starts college full-time.

Though as a young adult on the verge of college life Lucas is no longer as interested in airplanes as he once was, the military aspect of his earliest ambitions remain. His ideal professional role is in cybersecurity – specifically working to serve his country.

“With so many cyber threats like hackers from China, North Korea and other independent attackers, cybersecurity is more relevant than ever,” Lucas said. “Being able to work with the brightest minds in the nation to help keep our power grids and our computer systems safe [would truly be] an honor.”

Lucas’ involvement with competitive IT security education programs like CyberPatriot are already allowing him to get a taste for using his IT knowledge in a demanding cybersecurity environment. And as he continues to get hands-on experience in areas like network penetration testing, it not only feeds his hunger for knowledge, but gives him something to discuss around the dinner table. Not so long ago, Lucas’ father was teaching him how to type a URL into a browser. Now he’s having informed conversations about cybersecurity with his dad.

As Lucas prepares to take the next step down his career path, he knows that doors are bound to open, thanks in no small part to CompTIA. “That’s what so attractive about CompTIA certifications,” Lucas said. “If you’re young and you have the knowledge and determination you can get out there and get yourself certified and already be in prime position to go into the IT field.”