Monday, March 8, 2021 | By Emily Matzelle
Daylight Saving Time is coming up this weekend, and technology helps keep us on time even when the clocks change. Wondering how it all works? Keep reading. 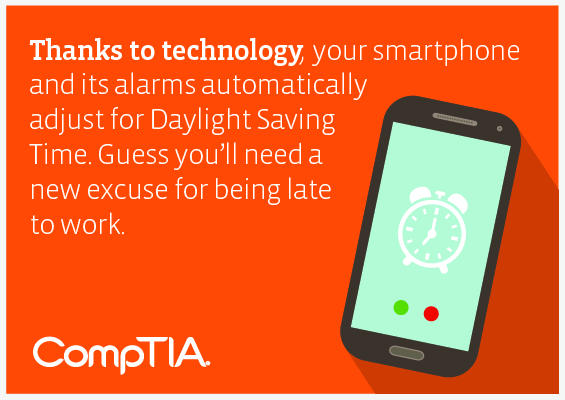 If you’re old enough to remember walking around the house the night before daylight saving time (DST) took effect to reset the clocks on your stove, microwave, VCR and alarms, you probably need a night cream! Jokes aside, today’s smart devices have made manually adjusting your clocks an ancient undertaking. But, how does it all happen? And, can you peacefully go to bed on the eve of DST without the worry that you’ll be late for work in the morning?

The History of Time

Before we can begin to contemplate how our smart devices automatically calibrate the correct time, we need a brief history lesson. Once upon a time, the Egyptians counted time by simply dividing daylight into 12 hours. It wasn’t an exact science, but it was close enough. In 1665, the public pendulum clock was invented – it’s accuracy precise enough to display hours, but not yet minutes. By 1927, quartz clocks could tell the time to about a half-a-second per day. A few decades later, in 1948, we had the first atomic clock, and by 1960, the even more accurate hydrogen master clock. But who determines the exact time? Well, that’s a job shared by the U.S. Naval Observatory (USNO) and the National Institute of Standards and Technology (NIST).

The Clocks That Control Everything

There are actually two clocks that control our time – the USNO Master Clock operates military time standards, and NIST operates on Coordinated Universal Time (UTC) to set U.S. civilian time standards. These two clocks provide the official U.S. government time. If you thought the phrase “it’s like clockwork” means simple – keeping the correct time is actually very complicated. In fact, every now and then, a leap second is added to UTC to synchronize clocks worldwide with the Earth’s ever-slowing rotation. While interesting, the leap second discussion takes us on a very physics-oriented tangent. Those of you wishing to take a closer look can read more about that from the USNO.

The Rise of the Internet

Of course, most of us don’t notice a leap second. We operate daily in accordance with whatever time our iPhones, Androids and laptops tell us. These connected devices run on Network Time Protocol (NTP), which uses UTC to synchronize computer clock times to a millisecond, or even a fraction of a millisecond.

According to a survey of the NTP network, more than 175,000 hosts run NTP on the internet. NIST also offers an Internet Time Services (ITS) and an Automated Computer Time Services (ACTS) to set computer and other clocks via the internet or telephone lines – making the manual turn of the hour and minutes something that our children might never have to deal with.

On March 14, many of us will “lose” an hour of sleep as we spring forward, but there are places in the United States that don’t change their clocks. Hawaii, parts of Arizona, American Samoa, Guam, Puerto Rico, the Virgin Islands and the Northern Mariana Islands do not observe Daylight Saving Time. Every year, U.S. states put forth legislation to get rid of DST. Most recently, Arkansas, Georgia, Iowa and Texas joined that list – and North Dakota’s bill even passed in the Senate. Of course, these debates for or against DST are neither here nor there in this article. We just want to be sure our alarm will go off in the morning.

By default, smartphones are set to automatically update the time as it changes. It’s the same as when you travel from one time zone to another. Your phone is supposed to update after “checking in” with the cell towers (utilizing ACTS) in your immediate area, adjusting not only the time on your phone, but also your calendar appointments and alarms.

Your Laptop or Tablet

Computers have a real-time clock – a special hardware device containing a quartz crystal on the motherboard that maintains the time. The motherboard also has a small battery that powers the clock device even when you shut your computer down. In addition, computers connected to the internet query a time server like NTP for the current time.

While smart appliances – like thermostats and home security systems – controlled remotely by your phone or tablet aren’t considered cutting edge anymore, the Internet of Things (IoT) has come a long way in the smart home ecosystem. For example, Panasonic’s MirAIe platform promotes connected living. The IoT platform connects home devices like your air conditioner, refrigerator, washing machine, ceiling fans, doorbells and even light switches to your smart device or your television to monitor and control. These connected appliances will reset themselves for DST!

Today’s cars have the ability to parallel park themselves, prevent accidents and even drive themselves. So why do we still have to set the clock? This is one trend that is slow to catch on. In order for a clock to automatically adjust, it has to be connected to a satellite-linked navigation system or an embedded phone – this can also be achieved with Apple Car Play or Android Auto. However, the average vehicle on the road is nearing 12 years old, so many of these options don’t apply. If you need help setting your car clock, check out this handy guide.

So, on the night of March 13th, you may have fewer clocks that you need to set forward one hour before you go to bed. As we move into an era that reminds us more and more of “The Jetsons,” keep in mind that while some of the conveniences of technology may make our lives easier, there are elements of humanity that make them worthwhile.