Friday, January 15, 2016 | By James Stanger
The world needs more IT professionals, specifically those with non-traditional IT skills, hybrid IT skills, adaptive IT skills, commodified data analytics ability and simple creativity. These are the skills to watch this year… and beyond. 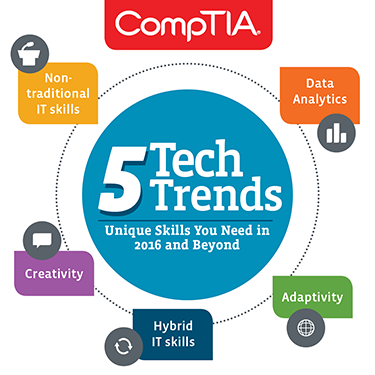 We’ve all heard that the world needs more IT professionals. The latest iteration of that comes from Forbes, which recently reported that over one million cybersecurity job openings exist worldwide –209,000 of them in the U.S. alone. Meanwhile, there are over three million unfilled IT jobs worldwide.

Still, I tend to be a bit skeptical; I’ve lived long enough to remember past flashes in the pan like the 2000 dot-bomb economy and all of the hype about the paperless office. I even remember the pet rock. But that’s another story. So I take stories about the job market with a grain of salt. I read them with as much enthusiasm as I reach announcements that the millennials will inherit the earth (or not). Yawn.

There may be plenty of jobs out there. But you need to have unique skills to get them, such as…

Over the years, I’ve done a lot of work in educating people in Web technologies, open source and security. I’ve noticed that no matter how talented someone is in formatting data in HTML5, taming a Linux box into providing consistent database services or identifying the latest denial-of-service attack, those skills are of little use unless the expert has some business skills. These skills are essential and they’re difficult to pick up in the classroom.

I was talking the other day to Stephen Wright, who is the statewide director for workforce and economic development in the state of California. He told me about a program that he created called the Statewide Career Pathways project. The project informs students that they need to obtain business skills. Some folks call these soft skills. They’re as vital to success in IT as knowing how TCP/IP works. These skills include problem solving, effective writing, the ability to work creatively with a team and project management.

Wright even mentioned golf as an essential skill. Yes, golf. Why? Because golfing is – in theory at least – a way people network and get to know each other. While I would add kayaking and scuba to that list, he has a point: You need to find ways to engage in proper networking – people networking – along with learning your technical skills.

Tim Crothers, a long-time associate who has worked in the security field for decades now, has been telling me about this for years: He’d rather hire someone who knows how to write and a few solid business principles over the wild-eyed security guru who knows about the latest hack. Crothers is a highly gifted, technical security worker, but he values non-technical skills the most. He doesn’t really care where people get these skills; whether it’s through a four-year degree or on-the-job training and internships. But the key is; people can get these skills slowly, over time.

This is why it is increasingly common for someone who works as a department manager or even retail sales associate for Best Buy, a Verizon mobile phone store or CostCo to become a true IT guru. Why? Because that retail sales person will quickly gain some IT and business wisdom. Combine this with some certs and some formal education and before you know it, that person will be able to sell things like complex, hosted cloud solutions.

Increasingly, individuals interested in getting a good IT job will need to know more than just IT. They’ll need to know how IT maps to specific business needs such as financial services, health care, telecommunications, managed services and hospitality.

Yes, that’s right: To get one of those one million cybersecurity jobs or three million IT jobs worldwide, you need to know more than that perfect language (it’s either Ruby or Python!) or have knowledge of the dark Web. You need to know a key vertical market. Why should someone in IT know something about, say, supply chain management? Because those hybrid skills will put you in demand in a service-based economy that values the secure transfer of information.

You may think that your hospitality or hospital job may be low-paying and something of a dead end. But if you combine that knowledge with an IT specialization, you’re now a hybrid worker who can leverage vast experience.

This past October, I attended a Smart Cities forum at the CompTIA EMEA conference in London. I asked one of the attendees about the technologies that interested her the most. She answered, “Things that learn.” By this, she meant technology that has the ability to gather information and change behavior based on that information.

Adaptive IT has become extremely important. From adaptive security architecture to wearable technology that can suggest how it should be worn based on your travel habits, these so-called things that learn will begin dominating our computing – and non-computing – lives. But let’s not focus just on the mobile apps and the gadgets.

In 2016, it’s important for security analysts to become the things that learn. How? By applying data analytics techniques to security. Right now, the security industry is interested in technologies that have the ability to reconfigure themselves. These include intrusion detection and prevention devices, firewalls, etc. But the key point here is that the world needs security analytics workers who can gather unsorted data in all of its uncontrolled velocity and then reduce that chaos down to actionable security steps. This means that the next security trend is going to involve educating individuals in how to use sophisticated big data tools to identify security gaps and advanced persistent threats.

The Internet of Things (an awful term), or, as Cisco calls it, The Internet of Everything (an even more awful term), has created major security implications. It’s also going to require a lot of data analytics technicians to set up all of the latest Hadoop-like solutions. It also requires a lot of people who have the ability to interpret the data that’s gathered.

The data analytics workers of 2016 and beyond aren’t going to be the people who have Ph.D.s in computer science or statistics. They’re going to be anyone interested in trends and data-driven decisions. After all, the workforce is increasingly populated by digital natives who expect the ability to gather data from Facebook and LinkedIn groups. They’re used to seeing what is trending on Twitter.

In 2015, we became accustomed every department in a company having instant access to IT through the as-a-service models that were introduced almost ten years ago. Even though big data was introduced only five years ago, we’ll find that starting in 2016, governments, businesses and organizations are going to expect all of its workers to understand how to use it on a daily basis.

How to Get That Job? Creativity

The essential skills and trends for 2016 aren’t simply all of the new technologies that keep getting invented and applied. It’s more about finding ways to apply all of these new technologies to our lives and how we do business. The people who can do that will get those unfilled jobs. So, clearly we need more and better mobile app developers and more creative Web and security workers, but, more importantly, we need people who have the ability to map these technologies to business skills. This is what creativity will mean starting this year.