Monday, February 11, 2019 | By Roger Hughlett
Technology leaders and business owners from across the nation converged on Capitol Hill for CompTIA’s 2019 DC Fly-In Feb 5-6. The two-day event kicked off with a series engaging panels, a Capitol Hill Speaker Series that featured current and former government officials, and more than 170 meetings with Members of Congress.

Technology leaders and business owners from across the nation converged on Capitol Hill for CompTIA’s 2019 DC Fly-In Feb 5-6. The two-day event kicked off with a series engaging panels, a Capitol Hill Speaker Series that featured current and former government officials, and more than 170 meetings with Members of Congress. 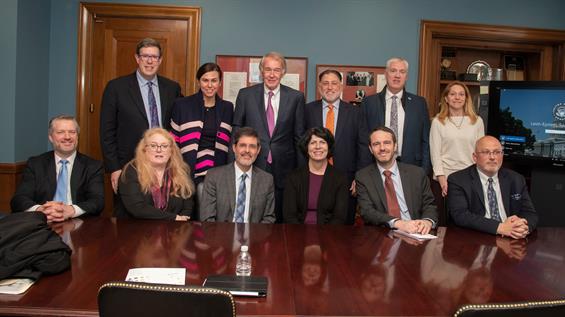 The central message delivered to members of the House of Representatives and the Senate concerned the role smart technologies should play in building the nation’s infrastructure. Because both Congress and the White House have prioritized infrastructure and a potential funding package for infrastructure, CompTIA wanted to make sure the technology industry was part of any discussions going forward.

“The annual Fly-In is an important opportunity to elevate our industry’s voice to policymakers in D.C.,” said Elizabeth Hyman, Executive Vice President of Public Sector and Advocacy (PSA) at CompTIA. “From rural electrification to the national highway system, America has a history of creating infrastructure milestones that have led to significant prosperity and national advantages. The future will no doubt rest on the next generation of infrastructure.”

A federal infrastructure funding package, which has been discussed but not introduced at this point, would help to modernize outdated infrastructure in a wide variety of sectors, including transportation, and energy.

In all these sectors, innovative technologies will increase efficiencies and effectiveness within existing infrastructure and set the foundation for future innovation and advancement. Because of that, CompTIA staff and members told lawmakers that any infrastructure package should include funding for core smart technologies that will help to build, secure, and advance communities around the country.

CompTIA told Congress that federal infrastructure funding should concentrate on the following goals:

The infrastructure conversation goes beyond Congress, too. That was made clear in remarks from FCC Commissioner Brendan Carr, who delivered the final keynote address at the Fly-In. The Commissioner said the regulatory agency wants to get out of the way of businesses so the private sector can deploy next-generation broadband networks. These 5G networks will serve as the backbone for smart cities -- from enhanced public utilities to improved transportation systems.

“We want the U.S. to win the race to 5G,” Carr said. “Technology companies will help us make this happen and the technology industry will benefit through all the advantages the next generation of networks will deliver.”

In addition to the meetings on Capitol Hill, CompTIA continued the tradition of honoring a member of the House of Representatives, a member of the Senate, and an industry visionary as Tech Champions at the D.C. Fly-In.