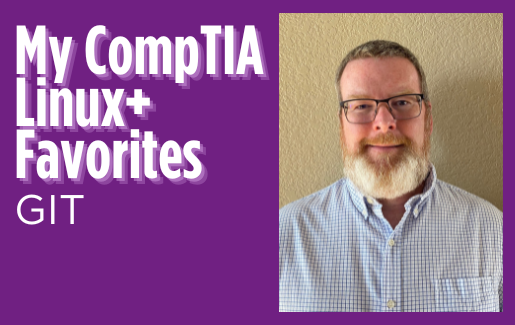 The new CompTIA Linux+ (XK0-005) is an exciting step forward for CompTIA. The objectives are more advanced, and the topics have been modernized to keep pace with the fast-moving world of open source.

This series covers my three favorite subjects from the new CompTIA Linux+ exam objectives and this article demonstrates why Git is one of my favorite new topics. The other two articles in the series cover Vim and containers. As I mentioned in My CompTIA Linux+ Favorites, it was difficult to narrow the list down to just three.

Be sure to read the whole series:

Git is a version control system for developers working collaboratively. Code is kept in a central repository but can be cloned to local workstations and then uploaded back to the repository with integrated changes. It’s an elegant solution that has changed how development teams work together.

However, since its release, Git users have made it so much more than just a development tool:

Git changes the workflow of whoever uses it, allowing for better time management and – in theory – a more consistent creation of what you’re creating.

How To Use Git

From managing a GitHub account to creating your first repository, while studying for CompTIA Linux+ (XK0-005) you’ll learn to initialize a project, commit, push, branch and manage files.

CompTIA Linux+ provides plenty of Git commands to get started with the tool’s basics. Participants will know enough about Git to create local repositories as well as pull and push files between them. Branching is also covered, as is cloning. You’ll be able to begin using Git right away to manage any file types you wish. Lab content, instructor demos and a clear explanation of a Git workflow make it easy to understand this essential tool.

Git is a subset of the larger IaC subject that emphasizes changing administrative practices. Containers are covered, too, as are automation and orchestration practices – Git is an important component of all of these. Additionally, configuration files for Ansible, Chef and Puppet can all be maintained by using Git. CompTIA Linux+ also contains these orchestration utilities.

You do not have to look very hard to find ways to adapt Git to day-to-day Linux system administration. A key exam objective is SSH configuration, so why not use Git to manage a master copy of the file that defines various SSH daemon security settings, or centrally store and version backup scripts that may be run on multiple servers?

There are plenty of ways to apply a Git workflow to standard sysadmin tasks.

Through the many years that I’ve worked with, taught and written about Linux, I’ve found that CompTIA Linux+ dovetails nicely with CompTIA Security+, CompTIA Server+ and CompTIA Cloud+. All three of these topic areas rely on an underlying Linux foundation. By including subjects such as Git (and containers), this content is more relevant than ever. Learning Git benefits developers and administrators alike, and it’s a powerful tool in the modern IT world.

While Git is one of my favorite new CompTIA Linux+ topics, by no means is it the only one.

Stay tuned for my two other “favorites” articles, one on Vim and the other about containers.

See all the topics covered by CompTIA Linux+ (XK0-005) by downloading the exam objectives for free.