Who’s Hiring for IT Jobs in the United States?

Wednesday, December 16, 2020 | By Emily Matzelle
IT pros continue to be in demand - even amidst a pandemic. But who is hiring, and where? We turn to CompTIA Tech Town data to find out. 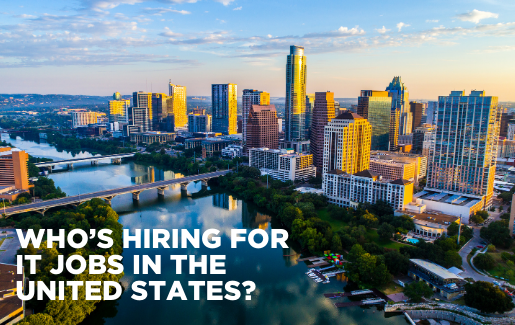 IT pros continue to be in demand. Even amidst a pandemic – or perhaps, in large part due to the pandemic – the increasing importance of technology to business strategy is suddenly crystal clear. In fact, according to CompTIA’s IT Industry Outlook 2021, nearly 80% of IT professionals feel good about their role as a technologist, with the majority seeing a bright outlook thanks to the high demand for skills. This demand means that companies are hiring. The question, of course, is who and where?

To provide some guidance, we turn to the CompTIA Tech Town Index 2020. This report points IT pros in the direction of where opportunity intersects with affordability and quality of life across the United States. Tech Town data not only ranks large metro areas according to these criteria, but it also calls out the top employers in each region. So, who’s hiring right now?

We’ve outlined the top 20 metro areas below, highlighting technology job growth and the top employers seeking tech talent this year. If you’re looking to take your IT career to the next level, scroll through and take a look at where opportunities exist. Then click on the ZipRecruiter link to match yourself to open jobs based on your self-identified job search criteria in each area. Learn more about CompTIA’s partnership with ZipRecruiter.

Who’s Hiring IT Pros in the United States?

Austin has done it again. The Austin-Round Rock metro area is holding steady at No. 1 on the Tech Town Index – its second year in a row in the top spot. The blossoming tech hub posted 68,323 IT jobs between August 2019 and July 2020 – an increase of more than 19,000 over last year.

Match me to open jobs in Austin.

The sheer number of available IT jobs in Dallas is one of the key reasons it’s in the No. 2 spot this year. In the past 12 months, 178,579 IT jobs were posted in the Dallas metro area, including Fort Worth and Arlington – nearly 32,000 more than last year.

Match me to open jobs in Dallas.

Talent in this area flock to the startups, and the startups need the talent. With multiple universities and plenty of community colleges within throwing distance, a qualified workforce is at the ready in Raleigh. It’s no surprise that the area advertised for 44,604 IT positions in the past year alone.

Match me to open jobs in Raleigh.

With 134,971 IT jobs advertised for in the last year, the San Jose area is still poised for growth. In fact, jobs are expected to grow by 3% in one year and by 11% in the next five years – numbers that have certainly factored into San Jose’s consistently high ranking on the Tech Town Index.

Match me to open jobs in San Jose.

Match me to open jobs in Charlotte.

The Seattle metro area continues to be a national hub for STEM jobs, GDP growth and venture capital investments. Notably one of the regions impacted the most by COVID-19, the Seattle area still shows a demand for technology jobs – 90,573 posted this past year as compared to 93,229 in the previous year.

Match me to open jobs in Seattle.

In the past 12 months, the combined areas of San Francisco, Oakland and Hayward posted a total of 168,495 technology jobs – and growth is imminent. In the next year, a 4% increase is expected, followed by a 13% increase over five years. That estimated increase in jobs is only topped by Austin.

Match me to open jobs in San Francisco.

Newly nicknamed “The Silicon Valley of the South,” tech jobs are on the rise in Atlanta. In the past year, the metro area advertised for 113,935 IT jobs – and that number is expected to grow by 8% over the next 5 years. The software and fintech markets are exploding, but don’t forget about the Fortune 500s.

Match me to open jobs in Atlanta.

Once a best-kept secret, Huntsville, Alabama, is no stranger to the tech scene. Opportunity continues to flourish in this Southern town, with more than 15,000 technology jobs advertised in the past year. IT jobs are expected to increase by 2% in the next year and by 8% over the next five years.

Match me to open jobs in Huntsville.

The Denver metro area posted nearly 80,000 jobs in the past 12 months – up over 8,000 from the previous year. IT jobs are expected to grow by 3% in the next year and by 12% over the next five years. A key contributor is the city’s effort to attract new business via enticing initiatives.

Match me to open jobs in Denver.

The name of the game in Washington, D.C., is jobs – and there are lots of them. Last year, the D.C. metro area topped the Tech Town Index with the sheer number of IT jobs available. This year D.C. surpasses the previous year by about 34,000, with more than 260,000 postings.

Match me to open jobs in Washington, D.C.

With more than 10,000 technology jobs being advertised as up for grabs in the past year, and the fact that the number of IT jobs is expected to grow by 10% over the next five years, it’s no surprise that Boulder is being recognized as a rising tech hub.

Match me to open jobs in Boulder.

This region excels in the areas of interactive software and games, defense technologies, open source, software development and nanotechnology. The area posted 22,124 IT jobs in the past year – and increase of nearly 3,500 over the previous year.

Match me to open jobs in Durham-Chapel Hill.

Tech experts and C-level executives are saying that Central Ohio has the right mix of talented people, groundwork and infrastructure that’s attracting big names. In the past year, Columbus posted 47,594 open tech jobs – and IT jobs are expected to increase by 3% over the next five years.

Match me to open jobs in Columbus.

In addition to a thriving IT industry, the Colorado Springs area has become a data center hotspot. The metro area advertised 16,000+ tech jobs last year and as companies and investors continue to discover the area, the number of IT jobs is expected to grow an estimated 6% in the next five years.

Match me to open jobs in Colorado Springs.

While the Boston metro area is well-known for its contributions to the life sciences, it’s not the only work getting noticed. Boston is growing in cybersecurity, data analytics and e-commerce. In the past year, the area advertised for 116,227 open tech positions as compared to 103,890 the previous year.

Match me to open jobs in Boston.

The Baltimore area posted more than 66,000 available tech jobs within the last year – that’s an increase of 8,000+ over the previous year. And while population decline is still an issue here, the tech scene is actually growing. In fact, the number of IT jobs is expected to reach nearly 80,000 in just five years.

Match me to open jobs in Baltimore.

Tech jobs are rising here – from 14,617 in 2018 to 16,701 in the past 12 months. And while the tech talent pipeline was once an issue in Madison, as University of Wisconsin graduates tended to move elsewhere post-graduation, the tide is turning and young professionals are now more inclined to stay.

Match me to open jobs in Madison.

The San Diego and Carlsbad areas posted 66,211 open technology positions last year. And with the tech movers and shakers doing their thing here, the number of IT jobs is estimated to grow by 7% over the next five years.

Match me to open jobs in San Diego.

Advertising for nearly 13,000 tech jobs in the past 12 months, the tech economy is on the rise – and Trenton’s location is the biggest draw. Located in central New Jersey on the Delaware River, Trenton is easily accessible to both New York City and Philadelphia.

Match me to open jobs in Trenton.

CompTIA has partnered with ZipRecruiter in the United States and Canada to help you find open positions from ZipRecruiter’s job openings, including hundreds of thousands of positions for IT professionals. Sign up for email alerts and get matched to relevant open jobs based on your own criteria. You can also upload your resume so ZipRecruiter can show your profile to pertinent employers looking for your skills.

Find tech jobs now! Sign up with ZipRecruiter to get started.