What Is Network Segmentation and Why It Matters?

Friday, October 23, 2020 | By David Landsberger
Locked doors behind locked doors discourage lazy threat actors and force them to look elsewhere. Therefore, there is no substitute for network segmentation when it comes to protecting your data. 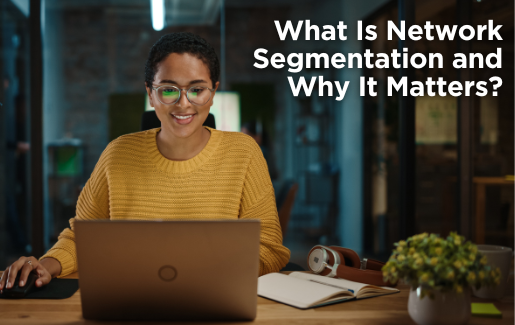 Locked doors behind locked doors discourage lazy threat actors and force them to look elsewhere. Therefore, there is no substitute for network segmentation when it comes to protecting your data.

Before we dive into what parts of the network to segment and how to do it, let’s level set with a definition.

What Is Network Segmentation?

Following are a few key benefits of network segmentation:

Why Is Network Segmentation Important?

Firewalls have to do far too much these days: From real-time learning behavioral analytics all the way down to allowing necessary cookies for user experience. Firewalls are very strict and follow established firewall rules, but they don’t do everything to protect your digital assets. What’s more, they can quickly become an outdated generation firewall. Your static IP addresses deserve to be protected, and they need backup beyond the front lines.

What happens when a threat actor penetrates the firewall via a phishing attempt, for example? Systems and services need to be isolated from one another to prevent a small breach from becoming a massive incident that leads to a data breach.

It’s one thing to have your smart lighting system compromised, but it’s another to have your customer data stolen. These are both virtualized functions for many businesses, but they are not nearly the same in terms of risk and liability.

If the business in the above example practices proper network segmentation and is hacked via their smart lighting system (this isn’t uncommon), the threat actor will find another obstacle. Basically, it’s like turning a corner within a hedge maze to find a dead end: the threat actor will have to work their way backward and attempt to find other access points to the systems and data they are attempting to compromise. At this point, most cybercriminals are going to get discouraged and look for an easier target.

Whether you are running a virtual local area network (LAN) in the cloud or running an SDN-powered architecture, network segmentation will protect your assets.

So how do you know what network zones your organization needs? Think about the different types of users and data you have and who needs access to what.

Here are some examples of the types of network zones you may want to establish:

I would suggest configuring your intrusion detection and intrusion prevention system (IDS/IPS) tools to monitor your internal segmented network zones, just as you would set them to monitor your public-facing networks. Make sure to review your logs or work with an IT partner that will double your vigilance and act as an extra set of eyes.

Moving to the cloud is a legitimate strategy for network segmentation, but as I have written before, it doesn’t mean it’s easier or more secure. Learn more on why your cloud solutions deserve zero-trust networking.

Everyone running internal systems, whether physical or virtualized, to meet business needs network security. The more complicated the architecture, the more important the need for segmentation. The only users who won’t need network segmentation are businesses that rely 100% on software as a service (SaaS) solutions or alternatively a business that operates offline/without IT services.

If you’re running a flat network to simplify the number of switches, you’re going to be an ideal target for a threat actor. While a flat network may save you time and money in the initial setup, you are leaving yourself open to being burned on the back end. That type of easy, lateral movement across the entire network will allow the bad guys to get wherever they want to go with little to no resistance.

Each customer will require a different level of segmentation.

There is no substitute for network segmentation. Micro-segmentation requires some time to initially set up, but the benefits highly outweigh the upfront time cost.

While safety and security are critical benefits unto themselves, the following are also excellent advantages when it comes to network segmentation:

Network segmentation can boost your overall security policy by limiting access privileges to those who need it, protecting the network from widespread cyberattacks and enabling better network performance by reducing the number of users in specific zones.

Network segmentation is covered in the CompTIA Security+ (SY0-601) exam.