Friday, February 12, 2016 | By Jamie Marturano
This Presidents’ Day, learn how U.S. presidents have encouraged advances in technology to secure the country and stimulate growth throughout the last century. 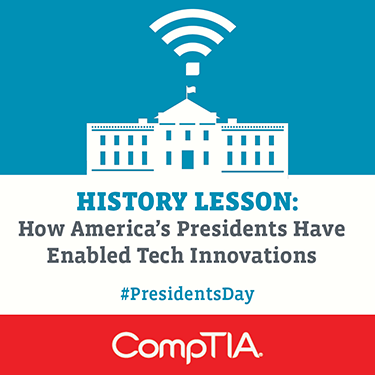 Innovations that were important to U.S. presidents for the security of our country now fit in the palm of every American’s hand. Some of the technology we use on a daily basis evolved over decades and was driven into the consumer market because our presidents budgeted for research and development.

With President Barack Obama’s proposed budget plan for 2017, he’s made it clear that securing our country is a cyber-battle. This month, he announced that his budget invests $19 billion to support the Cybersecurity National Action Plan and enhances the infrastructure and technologies that keep Americans safe online.

As history has shown, when our government funds an idea, the door is open for innovation.

The U.S. was behind Europe in aviation during World War I, but the conflict brought into focus the military value of air travel. The government first dabbled in flight for the purposes of the post office. President Woodrow Wilson’s administration approved $100,000 to begin an airmail service between Washington and New York in 1918. The service expanded to include transcontinental air service. By the end of Wilson’s presidency, the service was delivering mail across the county in 29 to 34 hours, which was two days less than it took by train. In order to promote the commercial potential of flight, President Calvin Coolidge enacted the Air Commerce act in 1926, which promoted air safety and licensing pilots. Through the act, the Department of Commerce built and operated lighted airways and improved its radio communications equipment. The improvements and regulation helped build confidence in air travel and commercial flying began to increase. President Franklin D. Roosevelt continued to revise the governing bodies for air travel and also created the Civilian Pilot Training Program just as the country was about to enter World War II. He authorized $5,675,000 for the training program for 1939 and 1940.

During President Richard Nixon’s years in the Oval Office, his national defense budget was considered far greater than the average when compared to budgets from other years. As a result, the U.S. Department of Defense was able to fund its Speech Understanding Research program through its Defense Advanced Research Projects Agency (DARPA). While there was debate among the participants about the success of the program, Carnegie Mellon University did develop its Harpy speech understanding system, which understood 1,011 words. Although DARPA terminated the program, several others continued to study this technology. After years of research and development, the technology was given a friendly name and a soothing voice, and it caught the attention of Steve Jobs. Today, all iPhone and iPad users carry similar speech recognition assistants with them – Siri.

In 1983, the world watched in horror when news broke that Korean Airlines Flight 007 was shot down by Soviet fighter jets when the pilot mistakenly strayed into Russian airspace. As a result, and with mounting pressure during the Cold War, President Ronald Reagan agreed to open the use of GPS technology to civilians. He increased defense spending to $456.5 billion in 1987 and is widely credited with helping move the technology along. However, President Jimmy Carter laid the groundwork for GPS well before Reagan. Although he was opposed to funding Apollo-style, manned space travel, citing it as neither “feasible nor necessary,” Carter did believe unmanned research could be valuable to the country. During his administration, Pentagon space spending grew from $2.4 billion to $4.8 billion, which helped fund the Navy’s NAVSTAR navigational network. The first NAVSTAR satellite was launched during Carter’s presidential term.

In 1958, in an urgent bid to not lose to the Soviets, who had just launched Sputnik, the world’s first manmade satellite, President Dwight Eisenhower asked Congress to approve $520 million in start-up funds and an annual budget of $2 billion to launch the Advanced Research Projects Agency (ARPA). ARPA became the Defense Advanced Research Project Agency (DARPA) in 1972. Eisenhower’s vision of the U.S. as a strong leader in technology has been fulfilled by many innovations in the group’s 58 years, including the TCP/IP specification and the previously mentioned speech recognition and GPS technology.

In 1969, ARPA researchers were learning to share information across a computer network, which the group called ARPANET. In the spring of 1973, Vincent Cerf and Robert Kahn developed communications protocols for sending packets of data across the ARPANET. They created the Transmission Control Protocol (TCP) and the Internet Protocol (IP), or TCP/IP, which remain today as the foundation of the Internet.

President George W. Bush was thrown into wartime planning while his presidency was still in its infancy, and the resulting unrest in the Middle East encouraged the country to focus on oil independence and energy conservation. The president signed the Energy Independence and Security Act of 2007, which was the first energy security legislation in the U.S. in more than a decade.

As a result, the federal government invested more than $22 billion in research and development of climate change technology, and the Department of Energy launched a competition to encourage the development of affordable, energy-efficient solid-state lighting, as the new energy mandates called for standard incandescent light bulbs to be phased out. Philips Lighting North America won the competition with its 60 watt LED lamp, which was the first of its kind to offer considerable energy savings to the consumer market.

LED technology has its beginnings back in 1962, when Nick Holonyak invented the light-emitting diode. It took the acceptance of the Energy Independence and Security Act to push the advancements to the mass market, and this act will continue the push for greater efficiency in the market through 2020.

Clinton Sees Growth of the Web

Under President Bill Clinton, Congress increased funding for the National Science Foundation (NSF) by more than 30 percent, and the country saw huge growth in the uses for and adoption of the World Wide Web.

The surge in funding during Clinton’s administration boosted university-based research. Working from an NSF grant, Stanford University graduate students Larry Page and Sergey Brin began a research project to create a new search engine that would rank search results more efficiently. As opposed to an index or a table of contents approach, Page and Brin created BackRub, which linked and then ranked search results. On September 15, 1997, Page and Brin registered Google.com as a domain.

The previous year, on October 29, 1996, at Ohio State University, President Bill Clinton, in speaking about the Next Generation Internet Initiative, said, “Four years ago, nobody but nuclear physicists had ever heard of the Internet. Today even my cat, Socks, has his own Web page.”