Aug 6, 2019, 22:37 PM by Scott Campbell
It takes creative thinking, perseverance and patience, but above all collaboration to turn smart cities visions into reality, Dominic Papa of the Phoenix-based Institute for Digital Progress, said during CompTIA’s 2019 ChannelCon in Las Vegas. 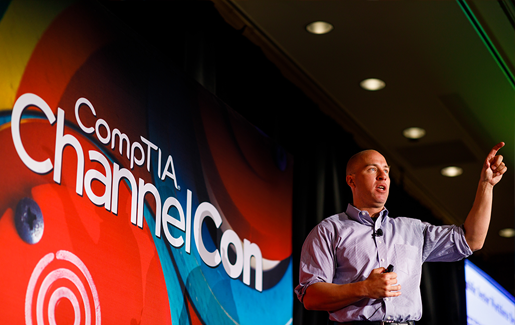 It’s one thing to develop an incredible smart city solution that would absolutely benefit a government agency or citizens. It’s an entirely different thing to get the government to actually implement said solution.

Anyone involved in implementing IoT and other smart solutions for government likely knows how difficult it can be. Bureaucracy, party politics, budget woes and a million other things can wreak havoc on even the best smart city ideas.

It takes some creative thinking, perseverance, patience but above all collaboration to turn Smart cities visions into reality, according to Dominic Papa, executive director and co-founder of the Phoenix-based Institute for Digital Progress. Papa detailed his experiences with the city of Phoenix during a ChannelCon breakout session “Collaborating Across Government and Industry to Build Smart Cities.”

“It was a struggle to get anything off the ground,” he said. “We were the fifth largest city in the U.S., and we couldn’t get anything going.” Papa would look with envy at cities like Barcelona, Dubai, Helsinki and London that implementing Smart city projects. Then he noticed they all had something in common—local leaders created independent organizations that could drive technology and innovation from the outside in.

“We watched Columbus, Ohio, turn a $40 million grant into a $140 million project. We watched San Diego do the largest IoT rollout. Dallas and Denver are doing cool things. How could we compete with these other communities that have a head start?” Papa said.

As a result, Papa spun out the Institute for Digital Progress, a 501(c)3 non-profit organization created to provide the mechanism to drive smart city technology projects in Phoenix.

“It was a lot of hard work and a lot of coffee, but we have 22 cities and towns committed, the largest public research institution in the country in Arizona State University committed, and the largest community college system in the country committed,” Papa said. “Now we can have conversations around how to effectively drive the development and deployment of technology at scale.”

Organizations like the Institute for Digital Progress are a new type of public/private partnership that focuses on the advancement of technologies to have a beneficial impact on cities and improve the quality of life for all residents and visitors, Papa said.

“Our advantage is we are the fourth largest county in the country, the fastest growing county, we have 22 jurisdictions slammed up right next to each other. Think about what we could achieve, the problems we could solve, if we could get those 22 jurisdictions to think together, act together, innovate together, and procure technology and infrastructure together. We could build a Smart Region and out scale everyone else that is specifically focused at the city level.  We want and we will be America’s first true smart region,” Papa said.

Having an independent, non-profit organization is key to driving Smart cities success, Papa said. “Once you get outside the bureaucracy of partisan politics, the promise of Smart cities technology has benefits that translate into red and blue, Republican and Democrat.”

One side doesn’t see an independent, non-profit organization as the other side’s project. It is removed from government and truly rests with the people and the community, according to Papa. “If a mayor moves on, or a governor changes, the initiative remains the same, the vision remains the same,” he said.

In addition, the Institute for Digital Progress found that developing relationships with channel partners was imperative. “It can’t be a ‘You sell this and walk away’ thing. That’s not beneficial. You need long-term partnerships that align with your strategies,” Papa said. “You have to find the right partners to invest and participate in your success. Not just for the next 30, 60 or 90 days,” he said.

For solution providers, Papa’s advice is to put yourself as close as possible to the point of innovation. Typically, that doesn’t mean an elected official, or even the CIO. Instead, look to develop relationships with local and regional economic development organizations, chambers of commerce, and other business/civic groups.

“That’s because governments struggle to do anything themselves. Look around to see who the key influencers are on economic policy and technology policy,” Papa said. “They are the ones to open the doors rather than try to approach the city as a vendor.”

Papa’s Institute for Digital Progress is a “do tank,” as opposed to a think tank, he said, because it’s able to show the impact technology can have and launch projects.

“Change the mold, change the model. Start with a project and build on small successes where you will have general buy-in,” Papa said. “Then you can start to develop a consensus and then build a long-term, in-depth strategy.”

The Institute for Digital Progress began with a project around sanitation trucks, specifically about better tracking and optimizing routes, Papa said.

The organization started a conversation with Cisco Systems, asking the networking giant if it had the technology to help solve the problem. Then it went to ASU’s School of Computing, Informatics and Decision Systems Engineering and asked for students to help solve the problem using Cisco equipment. The organization held a “hackathon” that attracted more than 100 students, which was pared to five finalists and then a winner.

“It was a win for the city because it was free R&D for them, and they got to see all these solutions for the challenge they are facing. Cisco loved it because we used their hardware to solve the problem. Students loved it because they could take what they are learning and apply it to a real-world challenge,” Papa said.

The entire process took four months to get to pilot, significantly faster than any government project would take, Papa said.

That success has fostered additional conversations and now the Institute is talking about Smart state initiatives with Arizona officials, including autonomous vehicles and other automated mobility ideas, Papa said. “We have some of the most tech forward leaders in the country in our state and in our region. Our elected officials have made it a priority to signal to technology companies that if you are looking for proving grounds to develop, test, validate and scale your solution, there is no better place to be than Greater Phoenix and the state of Arizona.

“There’s a lot that you can accomplish around the idea of a Smart city or a Smart region or a Smart state. You just need to figure out how to drive your first successful initiative by figuring out who to talk to and what they need,” Papa said. “There is plenty of opportunity for solution providers. You just need the right path and need to be willing to collaborate at a deeper level.”