Shaquille O’Neal Talks Investing, Tech Trends and Why He’s Proud to be a Geek 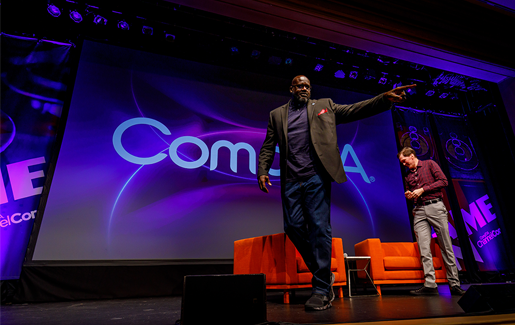 For a solid hour, O’Neal shared investment advice, his personal tech story and all the reasons he’s proud to be more cerebral than celebrity. Turns out ChannelCon is not O’Neal’s first tech conference—not by a long shot. “How many tech conferences do you go to?” Todd Thibodeaux, president and CEO of CompTIA, asked.

O’Neal got interested in technology through a high school computer course, though the material had him sweating at first. “That was back when computers were big and it was all control/alt/delete, and I was terrified of it,” he said. For help, he befriended another student who got picked on for being a geek and learned bit by bit about hardware, software and networks.

“The way he broke it down, I realized it wasn’t that difficult at all,” he said. “I became a geek and hung out with all the geeks and really started enjoying academics.” 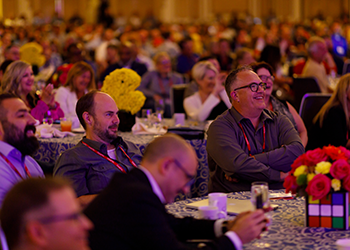 O’Neal’s love for tech turned him into an early tech adopter, the first one in his circle with a camera phone, an early investor in Google and a friend of developers in Silicon Valley. “Anything that deals with technology, I like to be in the forefront,” he said. “I called Steve Jobs about 80 times trying to get the first iPhone. I said, ‘I know it’s dropping in September and it’s June now, but if you could give me one now…’”

His investment in Google was a happy accident, through a friendship with an IT pro who turned him on to the idea of the new search engine. “One day I called my accountant and got a big, big return on that investment,” O’Neal said.

These days, he’s interested in the advancing medical side of technology as well as self-driving cars. “I love the world we’re living in,” he said. “Do you remember The Jetsons? All that stuff is coming true, and it’s a wonderful thing.”

O’Neal only invests in companies he already uses, like the home security monitor Ring, Icy Hot, Five Guys and The General insurance company. “I’m old-school in a business sense,” he said. “If I’m not a supporter of your company from a true business sense, I can’t take your money.”

He follows advice from Jeff Bezos, that if you invest in things that are going to change people’s lives, it’s mutually beneficial.

“When I first started investing, I didn’t know anything. I was always thinking from a monetary aspect, and I used to lose my ass,” he said. “Once I heard Jeff speak, I started investing in companies like that and it was a win-win.”

If it’s going to change people’s lives, he’ll try to make the investment, he said. “I’m a geek and I love technologies,” he said, predicting he’ll be first in line for the iPhone 11. “I’ll be standing there like an idiot, waiting with everyone else.” 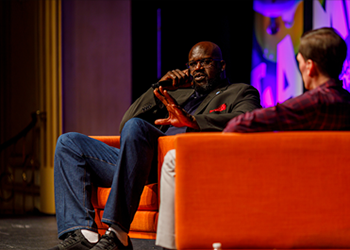 As a leader, it’s important that you remain humble, no matter how much fame and success you achieve. “Just because I’ve done a lot doesn’t mean I’m more important than my gentleman here who was taking shots at the craps table,” O’Neal said, pointing out a ChannelCon member in the front row who he’d seen the night before, getting lucky in the casino floor. “We’re all people. We’re all men, we’re all women and we’re all equal.”

As a basketball player, he learned from coaches with wildly different styles, like Phil Jackson and Pat Riley. “Pat Riley was disciplinary, it was his way or the highway and it was very effective,” he said, comparing him to Jackson, who came in burning sage and teaching the team to meditate. “Phil used to come in burning sage with these weird chants. Yamma yamma yamma … What I like about Phil is he was consistent. We did the same thing every day, because he said if you do the same thing every day it becomes part of your muscle memory.”

He also believes no individual can win a championship by themselves, and advised the audience to let their teams work together and communicate well without micromanaging.

“If those things work together, you’ll be very, very successful,” he said. O’Neal manages his own team using a one-minute management theory. “If I have to address something, we do it in 60 seconds or less.”

On to the Next One

On top of investing, playing basketball and starring in movies, O’Neal wants to add law enforcement to his resume. He’s been through two police academies in California and hopes to run for sheriff somewhere in the south.

“When I was growing up, law enforcement was close. We had Mr. Crawford, and he knew everybody,” he said. “It’s going further and further away from that, and I’d like to be one of the guys that will change that.”

He’s interested in law enforcement, but never politics, he said. “Politics is left and it’s right, and I want to be correct,” he said. “I want to do the right thing.”

Until then, he wants to keep people laughing because in the end, he said, the success, investments and celebrity don’t matter. “I want people to say, ‘When I met Shaquille O’Neal, he was a nice guy.'"