Monday, October 22, 2018 | By Roger Hughlett
CompTIA members and tech leaders from around the country came together for two days of dynamic panel discussions, engaging speeches and productive meetings.Experts and speakers covered everything from the long- and short-term impact of digital privacy laws to the vital and historic role coffeehouses played in changing the world. Here are six big ideas shared at the Tech Summit from some of the most forward-thinking leaders in the industry.

CompTIA members, tech influencers and policy makers from around the country came together for two days of dynamic panel discussions, engaging speeches and productive meetings. Panelists and speakers covered everything from the long- and short-term impact of digital privacy laws to the vital and historic role coffeehouses played in changing the world.

It was, to say the least, two days of entertaining and valuable information.

Here are six big ideas shared at the Tech Summit from some of the most forward-thinking leaders in the industry. 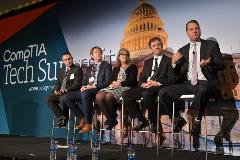 Everyone – from consumers to tech companies to government officials – wants to do something about digital and online privacy. Yael Weinman, Associate General Counsel for Privacy at Verizon, said there is real momentum with lawmakers and business to collaborate and craft laws and regulations that protect individuals without harming or slowing down businesses.

There is so much momentum and current interests on privacy before of California.

Travis Hall, Telecommunications Policy Analyst at the Department of Commerce’s National Telecommunications and Information Administration (NTIA), told the audience that the California Consumer Privacy Act immediately changed the approach the federal government is taking with creating an appropriate national solution that promotes consumer privacy as well as economic prosperity.

The bottom line, according to the experts at the Tech Summit, is that California has put a completely different tenor and sense of urgency to digital privacy laws. But here’s the rub: It’s very difficult to clearly define privacy. Everyone knows that cybersecurity is protecting data. Privacy is a bit “squishier” and harder to define, said Verizon’s Weinman. Her solution? Perhaps all stakeholders need to approach privacy as risk mitigation and stop trying to define what it means.

Mark Hopson knows a great deal about government technology issues. As Innovation Specialist for the General Services Administration’s 18F, which was stood up to parachute in and fix the “healthcare.gov crisis,” Hopson now works directly with other federal agencies to guide them into more efficient procurement procedures.

Why is it so important to improve how the federal government – and states and local governments – buy information technology products and services? Simply put: The stakes are incredibly high.

To drive the point home, Hopson shared that only 6 percent of federal IT projects that cost over $10 million succeed in cost, time and performance. That leaves 94 percent of projects falling short.

The takeaway here from the expert panelists and for the packed room was clear: There’s a great deal of opportunity for improving how governments buy tech.

3.  The Skills and Gender Gaps Are Real in Tech

All three panelists discussed the very real skills gap facing the IT industry as it continues to grow. Internships (to be clear, paid internships) and apprenticeships are critical to delivering the best technology training.

While college isn’t for everyone, for those that do go to two-year or four-year schools there are improvements that can be made in higher education as well. Especially when it comes to bringing more females into the male-dominated world of technology.

4.  The 2018 Elections Will Be Significant and Unpredictable

While attendees at the Tech Summit had front row seats to some of the best pollical intelligence out there today, there’s really just no telling what is going to happen on November 6 when voters head to the polls.

Jason Boxt, Executive Vice President at PSB Research, and Tim Storey, Director of State Services at the National Conference of State Legislatures (NCSL), were joined on stage by Madelaine Pisani, who covers governors for the National Journal.

Without handicapping individual races, let’s just think about the size and scope of what is happening.

At the congressional level, House Democrats appear poised to retake control of the chamber, needing to pick up 23 seats in 25 seats in districts currently held by Republicans but where Hillary Clinton won in 2016. In the Senate, 10 Democratic Senators are up for re-election in states that President Trump won.

Of the 36 overall gubernatorial races, there are 13 open seats currently held by Republicans and 4 open seats for Democrats.

The number of women running for state office is up by 30 percent over the last two years. Only 25.4 percent of state legislators are women today but that is expected to increase after this year’s election.

Given the wide ranging impact on policy discussions at every level of government, the results of the elections across the country will be closely watched by the IT industry. 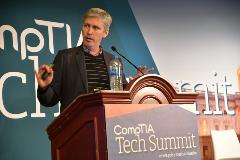 Award-winning author and TV host Steven Johnson entertained the crowd with fascinating stories about historic moments of innovation. From the very beginning of civilization, collaboration has been at the center of all major innovations. In fact, Johnson believes the idea of the “lone genius” solving the world’s problems without anyone else contributing to the effort is just plain wrong.

Even the vocabulary we use to describe innovation has it all wrong. Metaphors that include single light bulbs or apples falling from trees aren’t accurate. It is only through working together can major innovations come to be. When you go back and truly study the history of transformative ideas, Johnson said the so-called “Eureka!” moment is almost always a myth. Instead, ideas that are truly transformative come into the world as a slow hunch before they crystallize to something that is actionable and usable.

We also took time at the Tech Summit to honor a select group of members who demonstrated outstanding service and impact through their commitment, passion, professionalism and leadership in assisting CompTIA as it advocated on behalf of the IT industry.

The Champions Award is the most prestigious acknowledgment that the CompTIA membership can bestow on one of its own. The inaugural Champions of the Year were:

Without members with such dedication, CompTIA just wouldn’t be what we are today.

We look forward to honoring the a new group of Champions of the Year at next year’s Tech Summit so keep that in mind and look for more details to come in 2019.