Is the West the Best? Why Tech Thrives on the U.S. West Coast

Wednesday, January 13, 2021 | By Emily Matzelle
Join us on a road trip up the Pacific Coast Highway as we identify why big tech thrives on the West Coast. 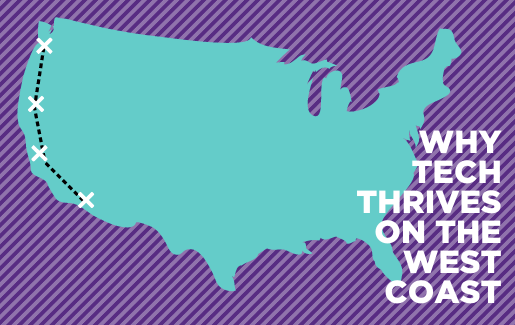 Traditionally, when you think of big tech you think of the West Coast. Major players like Apple, Microsoft, Oracle, Qualcomm, IBM and Facebook are headquartered along the Pacific Coast. Even as the heavy hitters open up offices across the country and start-ups are increasingly flourishing in less-traditional tech hubs, cities like San Jose, San Francisco and San Diego in California, along with Seattle, Washington, continue to be mainstays when it comes to technology jobs that attract big talent.

Why is that? Is the West the best when it comes to technology?

To answer that question, let’s take a road trip up the Pacific Coast Highway. Factoring in data from the CompTIA Tech Town 2020 Index, we’ll start in southern-most San Diego, make a stop in San Jose, head northwest to San Francisco and finally trek all the way up north to Seattle to determine exactly why tech thrives in the West – and what IT pros can expect living and working in these metro areas.

The combination of top-notch universities and world-renowned research institutes in the San Diego area have significantly contributed to the slow and methodical tech growth that’s emerged over the past 20 years here.

Aptly nicknamed Silicon Beach, the biotech and tech-based industries started to prosper when the University of California, San Diego, became known for its sciences and technology programs. It also helped when the Salk Institute for Biological Studies and the Scripps Research Institute started to garner international recognition for their work. Suddenly, San Diego had a reputation.

The original home to telecommunications giant Qualcomm, San Diego does have a history of innovative industry. But, the recent rise in the software scene here can be attributed to the evolution of technology itself. For instance, tech execs say that companies are now less expensive to get started, thanks to new cloud technologies.

In fact, according to Inc., the San Diego IT sector has seen a three-year revenue growth of 188%. That growth accounts partly for the emerging startup scene focusing on artificial intelligence (AI). We know that Qualcomm’s corporate venture fund invested $100 million into AI companies in the area – perhaps another advantage to having a locally founded tech giant right in your own backyard.

But again, why San Diego? There are plenty of other cities that enjoy the benefits of top-notch educational institutions and research facilities. Simply put, it’s the location.

Another reason? A sense of community.

“The best part about all of this, is the community is still one that isn’t so large that you get lost in it,” one Quora user explained about living and working in San Diego. “Networking is incredibly easy, and IMHO, people are much more open to connecting since we don’t have the resources of larger cities.”

Approximately 460 miles up the coast from San Diego is the capital of Silicon Valley itself – San Jose. The San Jose metro area, including Sunnyvale and Santa Clara, is home to giants like Apple, Google, Adobe, Cisco and more. But technology grandfather, Stanford professor Frederick Terman, made the most significant impact in the area back in 1937 when he encouraged Stanford faculty and graduates to start businesses locally. The first, and most famous, firm founded in this way is Hewlett-Packard.

Another milestone in the area was the founding of the Shockley Semiconductor Laboratory. This pioneering semiconductor developer is known as the first high-tech company consisting of a team of young scientists and engineers focused on designing a new type of silicon-based semiconductor devices. To this day, these silicon chips are used in just about everything that’s computerized – hence the name Silicon Valley.

That rich history explains how technology was born in the San Jose area, but the entrepreneurial spirit of Silicon Valley is the reason why it exploded. Because so many successful tech companies got their start in San Jose, the notion that your idea could be the next big thing is very real here.

One Quora user talks about the energy that fills the air in Silicon Valley.

“The vibe and energy of people here is amazing,” they wrote. “Everyone is looking at things and trying to solve problems. There is no limitation to people’s hopes and dreams.”

In fact, IT pros that live and work in the area say that the coffee shops are a huge benefit here – and it really doesn’t have anything to do with the coffee per se, but rather, who you could be drinking coffee with.

“Coffee shops here are full of people ideating, pitching and incubating,” another Quora user wrote. “You can meet the future Zuckerberg or Jobs here, or you can meet your future employer or co-founder.”

Best U.S. Cities for Tech Jobs in 2021
The Best UK City for IT Pros to Work and Live
Educated and Edgy: Why Tech Thrives on the U.S. East Coast
How Cost of Living Stacks Up in these UK Tech Towns
Why Technology Thrives in the South

While San Jose has proclaimed itself the capital of Silicon Valley, San Francisco is still the mecca of tech innovation. Easily one of the most enjoyable cities in the U.S., San Francisco is just a hop, skip and a jump up the bay from San Jose. In fact, the cities that officially comprise Silicon Valley include San Jose, Menlo Park, Palo Alto, Mountain View, Cupertino, Santa Clara, Redwood City and Sunnyvale – all part of the San Francisco bay area.

A combination of private capital, innovative talent and state-of-the-art research and development facilities make San Francisco a win–win for IT pros. Case in point, population numbers are actually on the rise here. The California Department of Finance reports that the population in San Francisco has increased by more than 6,700 in the past year.

Companies here are hiring – to the tune of 168,495 open IT positions in the past year alone. Tech big wigs like Amazon and Facebook top the list of those recruiting right now, as are industry powerhouses like Wells Fargo, Deloitte and Salesforce. And the opportunity doesn’t end there. In 2020 Silicon Valley employees voted Google as the most desirable company to work for, followed by Netflix, Slack, LinkedIn and Apple, according to a survey put out by job search marketplace Hired.

San Franciscans have particularly strong feelings about their home – especially amid negative press that slams the area’s exorbitantly high cost of living.

“The weather is mild; the geography is dramatic; the architecture is stunning. San Francisco is a West Coast cultural, entrepreneurial and technological mecca,” one Quora user said. “And San Francisco is poised right on the Pacific Ocean. One can go north across the magnificent Golden Gate Bridge to the Marin Headlands or south toward Monterey and Big Sur. Yes, there are many great urban centers across the world, but none with quite this combination of attractions.”

Just about 800 miles up the coast, we arrive at our final destination: Seattle. The Seattle metro area continues to be a national hub for STEM jobs, GDP growth and venture capital investments. But the city’s tech industry actually started with Boeing. The Boeing Airplane Company was the first significant local company that relied on advanced engineering and technology – and it dominated the Seattle economy after the 1920s.

But in the early 1980s a revolution in the computer software and telecommunications industries was on the threshold of erupting. The most notable Seattle-based company? Microsoft, of course. From Windows to Microsoft Office to Xbox, the company represents the first big tech boom for the Seattle area – famously creating at least 10,000 millionaires in the state by the year 2000.

Fast forward to 2020 and that footprint continues to grow. According to the Seattle Tech Ecosystem Report, the information, communications and technology sector grew faster than any other sector of Greater Seattle’s innovation economy this year. Amazon and Microsoft are at the helm, with big tech powerhouses like Salesforce, Google, Apple, Facebook and others expanding in the area as well.

IT pros who have experience working in both Seattle and the Bay Area claim the culture differs slightly between the two cities, with San Francisco boasting a younger demographic and a more frenzied work pace, and Seattle being less entrepreneurial but more established.

“Seattle has a tremendous amount of technical talent. The tech scene is dominated by a few major players, such as Microsoft and Amazon, who are magnets for top tech people,” a Quora user said. “People here tend to be a bit more risk averse and, overall, less entrepreneurial. They don’t jump from job to job the way people do in the Bay Area.”

We can’t objectively say the west is the best when it comes to attracting (and retaining) top tech talent. But we can deduce that San Diego, San Jose, San Francisco and Seattle all have a few things in common.

First, something really big happened there. In San Diego it was Qualcomm, in Silicon Valley it was the creation of the silicon chip, and in Seattle, Boeing laid the groundwork for Microsoft. These events attracted top talent to these cities. People wanted to work with the best.

Secondly, entrepreneurship is championed in each of these areas. As the first startups flourished beyond expectations, new and innovative ideas were born, nurtured and raised and new companies were formed. Suddenly, you have yourself a legitimate tech town.

When you put these two factors together, you have an exciting equation that continues to beget success. Is the West the best? Tell us what you think! And stay tuned for additional installments as we deep dive into other regions featured in the CompTIA Tech Town 2020 Index.