Friday, February 20, 2015 | By Michelle Peterson
High school junior Shannon Watkins didn’t have a career path in mind when she started at Sarah E. Goode STEM Academy in Chicago, but her skills-based learning experience at one of Chicago’s five Early College STEM Schools — plus exposure to real IT workplaces like IBM and Razorfish — opened her eyes to some wild possibilities. 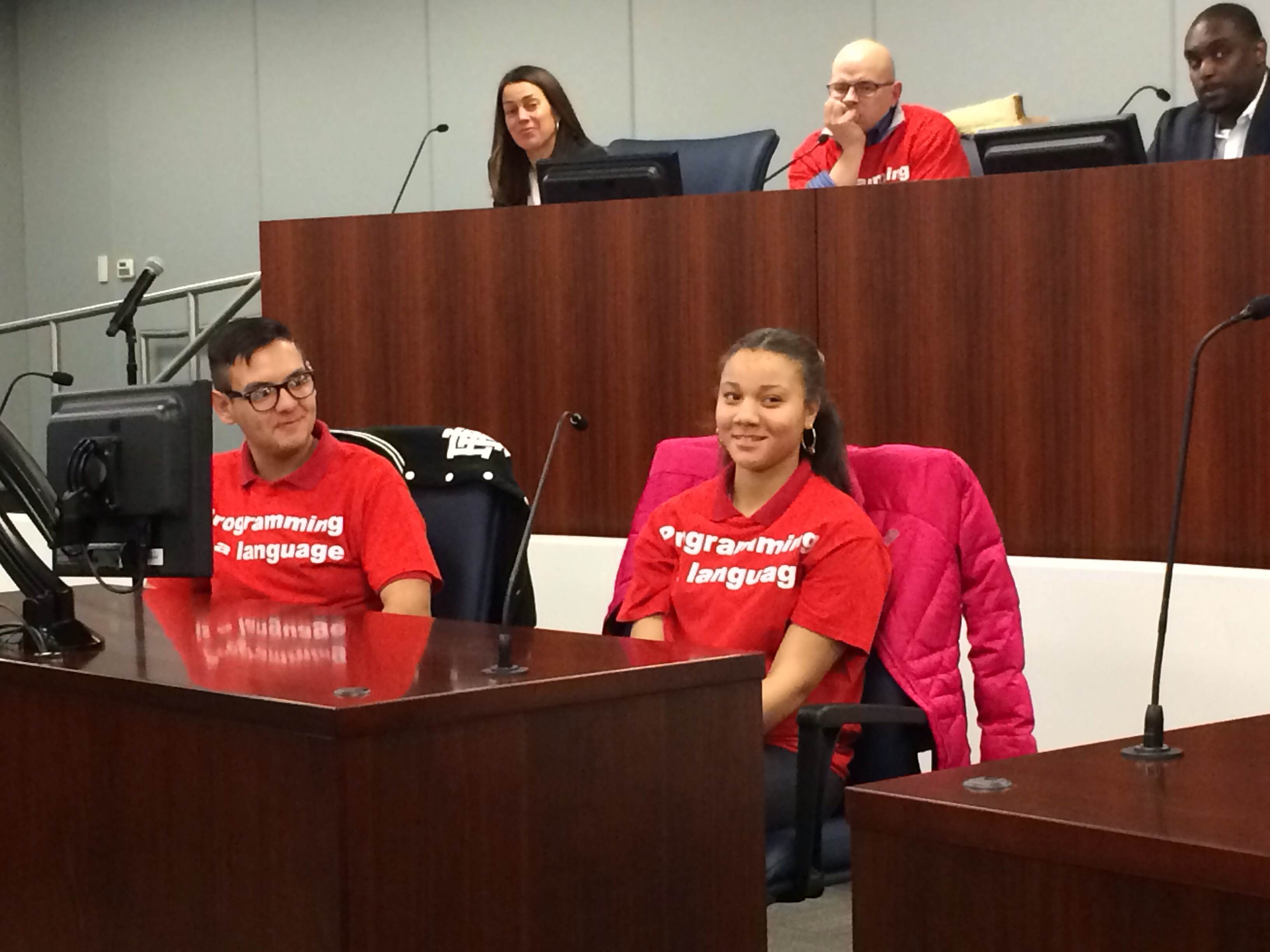 High school junior Shannon Watkins didn’t have a career path in mind when she started at Sarah E. Goode STEM Academy in Chicago, but her skills-based learning experience at one of Chicago’s five Early College STEM Schools (ECSS) — plus exposure to real IT workplaces like IBM and Razorfish — opened her eyes to some wild possibilities.

“It was interesting being able to see different jobs people were doing that weren’t just teachers and police and firefighters,” said Watkins, now with a clear idea of her future. “I want to go into programming, because I’ve done it and I’ve seen how easy it is to code a website.”

During “The State of IT: The Diversity Divide,”a panel hosted by CompTIA, the Creating IT Futures Foundation and Lumity, she and classmate Saul Sahagun shared their experiences attending a school that focuses on skills needed in the modern workplace — an educational initiative created to build a pipeline for talent and solve the IT industry’s skills gap.

On a bitterly cold evening, about 30 people gathered downtown at a Chicago Public Schools building to hear the panel address under-represented demographic groups in the tech workforce, plus the need for private and public partnerships to attract and retain diverse talent, including hosting summer internships for students.

“As a nation, we’re facing a looming skills gap,” said moderator Brenda Darden Wilkerson, senior manager for computer science and IT Education for Chicago Public Schools. “Chicago last year had over 100,000 IT openings. That puts us third in the nation for IT job openings — there are lots and lots of opportunities, but how can we get our city and our students engaged into that pipeline?”

Part of the solution was the creation of Chicago’s Early College STEM Schools — Clark, Corliss, CVCA, Sarah E. Goode High School, and Lake View High Schools — which opened in September 2012 to address the skills gap in the IT industry. The schools teach digital literacy and technical skills and introduce students to what it’s like to work in the real world. Students can earn college credits under a partnership agreement with five technology companies, CPS and City Colleges of Chicago and complete a six-year program with an associate’s degree.

In their first two years at the Sarah E. Goode, Watkins and Sahagun worked with teachers like panelist Eric Berngen, who is also the school’s technology department chair, to learn web development and programming. They now take college IT courses at Daley College.

The ECSS schools go beyond technical literacy, said panelist Shelley Stern Grach, the director of engagement at Microsoft, a corporate partner in the ECSS initiative. The curriculum teaches critical thinking, collaboration and confidence. “It’s a big package,” she said. “The technical skills are super important, but it’s also developing the ability to work in different environments, and all of that is being packaged together.”

Public and private partnerships with the ECSS program help broaden the student experience. At Cisco, for example, students take virtual trips with schools across the country — including a peek at a forensic autopsy with a school in St. Louis, and a look into the skies at the Houston Science Space Center. “It’s amazing to watch them interact and ask really intelligent questions, and to act as if they’re a Cisco employee,” said panelist Jerry Rocco, City of Chicago and Cook County Account Manager for Cisco.

Partnership with the City of Chicago means students also get to work on interesting projects. Lake View students, for example, teamed with the Illinois Science and Technology Coalition and the Army Corps of Engineers to analyze water in the City of Chicago, looking for ways to make water use more efficient.

All the exploration and activities give students a chance to try and fail in technology, which helps them grow, Berngen said. “Failure in technology isn’t a bad thing,” he said. “Giving up is a bad thing, but failing is just part of the process.”

He’s preparing his students for summer internships where they can show off their abilities to work independently. “When you go into the corporate world, people aren’t looking to coddle you. I give them a hard-knock life,” he said, adding that his “hard-knock” approach often includes the phrase, “Dude, you’ve got to figure it out.”

“The way Mr. Berngen taught us, there’s always a solution and you always have to experiment, no matter the circumstances,” Sahagun said.

In addition to the skills gap, the industry struggles to bridge the diversity gap: Women, Latinos and African Americans are still vastly underrepresented in IT. “I think a lot of students don’t go into these technologies because they’re not exposed to it,” said Rocco. Students in Chicago’s STEM schools are already bucking diversity trends, and their influence spreads to younger siblings, cousins and friends.

Thankfully, Wilkerson said, we’re in a time when many of our nation’s leading companies are starting to address this issue. She cited multimillion-dollar diversity initiatives from Google and Intel, and the importance of internships to female and minority students, like the ones the early college STEM schools serve.

The benefit of diversity is getting as many voices and ideas in the room as you can, said Cambry. “You do better in the stock market when you have diversity,” he said. “When we talk about the fabric of education and the workforce development piece, it’s important to make sure that everybody’s represented and has a chance, and that everyone can see someone who looks like them working in those careers.”

A diverse workforce isn’t just about skin color — it means diversity in ideas, perspective and opinions.

“We’re always trying to build a diverse workforce, with multiple ethnicities, genders and interests, and I think one of the challenges we have as a corporation is that without building that pipeline, we can’t bring in the people,” said panelist Stephanie Anderson, corporate citizen and corporate affairs manager for IBM. “We need to build that pipeline so as they grow, they’ll be interested in jobs at IBM. It takes building that pipeline and introducing students to those careers early on.”

Early on, Berngen said many of his students considered technology “a white guy’s job.” By discussing the diversity divide with students, they’ve begun to understand the issue and now grasp how much their input is needed. “Now, it’s drastically different to see how many are interested in programming, and girls are, like, the rock stars,” Berngen said. “Girls have been rocking house.”

The Power of Internships

To give students the full spectrum of education and work experience, the early college STEM schools incorporate summer internships into their programs. The program is currently looking for companies in the Chicago area to host six-week internships for a variety of students. If you’re interested in hosting an intern, learn more here.

“I think the summer internship is there to help us prove ourselves, so we can show the rest of the world that you don’t have to specifically go to college and get a high degree to get a good job,” said Sahagun, who wants to pursue computer engineering when he graduates. “It’s just the influence from the people around you who can help.”

Watkins called summer internships a great opportunity not available at all schools. “They’re good for students who want to go into a certain field. An internship can help them think, ‘I could be doing this for the rest of my life,’” she said.

Anderson, who worked in human resources at IBM for many years, said she can’t count the number of times she’s finished a conversation with a student and thought, “I would hire that person today.” “It speaks a lot to their technical skills and how they’ve developed at school,” she said.

The work experience also builds confidence and independence, and is part of the reason Berngen pushes his students to think critically so they can solve problems in the real world. He said: “I’ll put the Berngen stamp on it: When you hire our students for potential internships, you’re going to get that independence — you don’t have to coddle them.”

Summer internships give students a chance to experience technical careers first-hand and enter the workforce with a burgeoning skillset. “We’re looking for six- to eight-week summer internships, hopefully paid, where students can practice what they’re learning in a real-world environment,” said Andrea McMillian, a relationships manager for CompTIA.

“A lot of statistics say that women, African Americans and Latinos graduate but don’t get jobs in technology,” said Cambry, who’s trying to expand the pipeline of talent to include historically black colleges and universities. “Some people might have education but not the skills, and maybe we can bridge that gap in the short term and give them an opportunity to change their lives.”

Michelle Peterson is a communications specialist for CompTIA.