How the U.S. and Brazil Could Accelerate the Space Race

Wednesday, November 28, 2018 | By David Logsdon
The U.S. and Brazil are working to build a bilateral space partnership to put satellites in orbit as efficiently as possible – with the help of the CompTIA Space Enterprise Council. 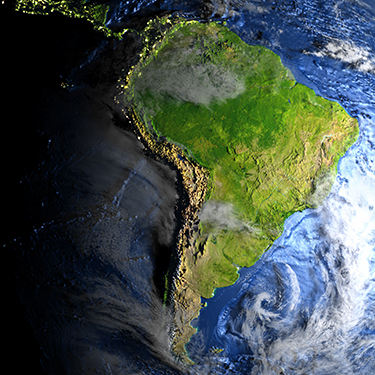 Late last year, the CompTIA Space Enterprise Council delegation composed of U.S. space executives stepped onto the sun-baked tarmac of the Alcântara Launch Center and entered Brazilian Air Force holy ground, the world’s best launch site for equatorial orbit. We were the first group of foreign executives admitted to the site, and our presence was an honor and a symbol of Brazil’s interest in the U.S. as a partner. The day of our arrival marked exactly 52 years since NASA collaborated with Brazil to launch its first sounding rocket – a Nike Apache. And our mission, in a sense, was to help complete their unfinished work; to forge a partnership in space for the greater prosperity and security of both our nations.

The stakes are high for U.S. business. Space is in the midst of a boom driven by a series of innovations; launch capabilities, miniaturization of satellites, use of commercial components and constantly increasing capability. According to a Bank of America Merrill Lynch report released in October 2017, the current annual global space market of approximately $339 billion will grow to $2.7 trillion by 2045 – more than eight times its current size. Given this immense opportunity, it is absolutely critical that U.S. and Brazilian companies seize any advantage they can to expand their share of this growing global market. A U.S. partnership with Brazil would give both countries an edge in this race.

Brazil has a prime launch site at Alcântara, which is only two degrees south of the equator. Launches from Brazil take advantage of the increased rotational velocity of the earth for an extra push into equatorial orbits, translating to about a 30 percent increase in the amount of payload a rocket can lift as compared to Cape Canaveral.  This would be a major efficiency gain for U.S. launch companies.

If U.S. companies were operating from Brazil, they could potentially increase U.S. geostationary launches by 30 percent at the expense of our competitors.

Medium and large geosynchronous launches are a mature market, but small launch is rapidly expanding. An estimated 400 to 600 launches for some 3,000 satellites under 50 kilograms are planned between now and 2022 alone. The space industry believes that Alcântara could easily capture 25 percent of these launches.

The majority of small launch vehicles are currently American-made. If American companies launch from Brazil, we could win a lion’s share of contracts in this segment.

If U.S. launches were permitted in Brazil, it would also help U.S. companies compete for contracts in the Brazilian domestic space market. The Brazilian Air Force plans to spend approximately $2.7 billion over the next 10 years on its strategic space systems program (PESE), including on four fleets of satellites, investment in the Alcântara infrastructure, laboratories and research. There is pent-up demand for satellite services – broadband connectivity, satellite imagery, etc. – that U.S. satellite service providers could help to address, including a National Broadband Plan aimed at bringing broadband to millions of Brazilians who currently lack access.

Brazil also has much to gain from a partnership with the U.S., including access to the largest space launch market in the world, inclusion of Brazilian products in U.S. supply chains, technology transfer in the context of joint projects, investment by U.S. companies in local operations and development of its space technology workforce.

The U.S. and Brazil Align Well Together

Few countries have as much in common as Brazil and the U.S. As continent-sized countries with enormous land and maritime borders, we both have pressing needs for space technology to unite our territories and exercise sovereignty over them. Both nations are also committed to non-proliferation. In fact, Brazil demonstrated this when it signed the Missile Technology Control Regime in 1994, agreeing not to develop launch vehicles capable of delivering nuclear weapons.

Momentum for increased U.S.-Brazil cooperation continues to grow. This scenario of growing trust and formal commitment in the strategic area tells the space industry that it is time to advocate for a deeper space partnership covering launch, satellite manufacture and services, and research and development.

In response to Brazilian President Michel Temer’s invitation to other nations to visit Alcantara, as well as a high-level meeting between Brazil’s then Minister of Defense Raul Jungmann and the CompTIA Space Enterprise Council last November, we organized the first U.S. space business mission to Brazil to communicate our interest in a partnership to the Brazilian government, develop a relationship with Brazilian industry, evaluate Alcântara for launch activities and assess other opportunities for cooperative efforts.

In order to unleash the potential of a Brazil-U.S. partnership, the two countries must sign, and the Brazilian Congress must ratify, a Technology Safeguards Agreement (TSA). This non-proliferation document ensures that, in launch operations, the signatories will put in place security measures that prevent access to U.S. space technologies with potential application in deployment of nuclear weapons.

Without a TSA in place, it is difficult for U.S. companies to run the numbers on launch ventures in Brazil. In order to map out the business case with the requisite studies of infrastructure and logistics, engage in planning discussions with realistic timelines, develop relationships with potential suppliers and identify joint venture partners, businesses must invest considerable financial and human resources. The risk is unacceptably large to justify this investment absent a TSA.

Brazil and the U.S. have sporadically discussed informal TSA renegotiation proposals in 2003, 2005, 2013 and, most recently, in May 2017, when Brazil forwarded a new proposal to the State Department for evaluation. It is our understanding that the difference between the Brazilian and U.S. positions is now down to three issues related to non-proliferation and technology transfer. These types of issues are common to previous negotiations with other spacefaring nations and were ultimately resolved.

In 2000, the U.S. and Brazil signed a TSA, but ideological foes of the Cardoso Administration in the Brazilian Congress who were on the political rise opposed a close relationship with the U.S. and chose this issue to make a stand, killing the TSA in committee. By 2015, these erstwhile opponents had become the leaders in the drive for ratification of the most important advances in our relationship; the Defense Cooperation Agreement and General Security of Military Information Agreement. The TSA now has champions as well, such as Deputy Jose Reinaldo Tavares, who has organized a Parliamentary Front or caucus of over 225 members for the Modernization and Revitalization of the Alcantara Launch Center.

The current Temer Administration is favorable to the idea of a space partnership with the U.S. and there is a sense of urgency to get a deal done. Jungmann expressed his frustration with the pace of negotiations, taking place via missives every few years. He favors bringing the negotiators together face-to-face, as soon as possible, so they can understand each other’s positions more clearly and devise solutions.

Building a bilateral space partnership would also help to meet the stated objectives of President Donald Trump’s new National Space Council, whose Executive Secretary Scott Pace said at the Galloway Space Law Symposium in December: “The task for the United States, if it wishes to influence how space is developed and utilized, is to create attractive projects and frameworks in which other nations choose to align themselves and their space activities with us, as opposed to others.”

Our window of opportunity to secure a TSA will not last long. Members of the Temer Administration who plan to run for political office will announce their departures over the next two to three months, which means that we may lose momentum and important proponents on the Brazilian side. Furthermore, as 2018 is a congressional election year, it will be difficult after the campaign season gets going to focus attention of the Brazilian Congress on discussing the benefits of a TSA to Brazil.

Businesses on both sides must engage now. The CompTIA Space Enterprise Council is leading discussions with the U.S. government on the commercial significance of this opportunity and our Brazilian counterparts are planning a similar effort in Brasilia. Interested companies can also bring their ideas to the Space Working Group of the Defense Industry Dialogue, a forum for interaction with our two defense ministries, which the CompTIA Space Enterprise Council was selected to lead by the Department of Commerce. One initiative has proposed to share best practices in export control compliance in order to develop a training and certification program that would ensure compliance with the terms of a TSA. This would give greater assurance to the U.S. non-proliferation authorities that their requirements will be applied consistently and foreign launch partners like Brazil would have a clear and detailed understanding of these sometimes complex procedures; giving all its clients confidence in using its launch services.

If our governments do not act quickly or fail to reach agreement on the TSA, the U.S. will lose the chance to partner with Brazil and combine our respective advantages to increase our global shares of and influence over the future space enterprise – all of which we would prefer to be based on the shared interests, values and freedoms of Brazil and the U.S.