Configuring secure access to servers and networks across the internet for remote workers is crucial to ensure that systems and data remain secure. Whether you are a server administrator, network administrator or cybersecurity professional, the method you’ll likely use to provide this secure access is via a virtual private network (VPN).

When it comes to encrypting traffic between systems, there’s a wide variety of different VPN software available, some of which have been used since the 1990s. Each of them focus on different encryption algorithms and flow control strategies, alongside mechanisms for providing for secure authentication and negotiating encryption keys. Unfortunately, this complexity often translates to more problems, slower traffic, as well as fewer use cases and supported operating systems.

WireGuard uses high-performance strong cryptography, such as ChaCha20 (for symmetric data encryption) and Curve25519 (for asymmetric key negotiation), alongside a framework similar to Secure Shell (SSH) and Git. Moreover, it provides VPN functionality only when traffic is sent, doesn't include complex authentication mechanisms and is available for all desktop and mobile operating systems.

In short, WireGuard is a cross-platform VPN that minimizes bandwidth and maximizes data transfer speed while boasting top-notch security and a lower attack surface.

Like its name suggests, a VPN is a virtual network that overlays your ordinary network. When data is sent on this virtual network, it is automatically encrypted to ensure that the data remains private.  We often say that this data is tunneled through the VPN.

WireGuard does not have a separate client and server component. Each system that participates in a WireGuard VPN is considered equal and called a peer in WireGuard documentation. However, it's easier to visualize communication when we think in terms of clients and servers, so we'll call one system a client and the other a server. And while WireGuard works equally well with IPv4 or IPv6 networks, we’ll stick to IPv4 for readability.

In the following sections, we'll implement this basic VPN configuration using WireGuard, and then discuss the configuration for other use cases.

Visit https://www.wireguard.com/install/ to see how to install WireGuard on your operating system.

You can usually install WireGuard from your Linux or BSD UNIX repository. For Windows, Android, macOS and iOS, there is an app you can get, but you should avoid the macOS app and instead use the Homebrew package manager method. (The macOS app is problematic at the time of this writing.) Since the client and server I use run Fedora Linux, I ran the dnf install wireguard-tools command as root (or via sudo) to install WireGuard on them.

To configure a new wg0 interface on the server that listens on port 55234 using the virtual private IP 172.16.0.99 and view the results, you can run the following commands:

To configure a new wg0 interface on the client that listens on port 55123 using the virtual private IP 172.16.0.1 and view the results, you can run the following commands:

You must also specify the IP addresses or networks you will allow over WireGuard. You can do all of this with one (long) command on each system:

That's it, you now have WireGuard ready to go! Let's ping the virtual private IP of the server (172.16.0.99) from the client and view the output of wg on both systems:

When you reboot, your wg0 interface and WireGuard configuration is gone. All that is left are your privatekey and publickey files. Thus, you would need to repeat the same commands on both systems again to set up the same WireGuard VPN.

For organizations that use infrastructure as code (IaC), the necessary commands and keys could be placed in their automation software (e.g., Ansible) or continuous deployment (CD) orchestration software (e.g., Kubernetes). Alternatively, you could place these commands within a shell script and configure your system to execute it at boot time.

Since the private and public keys are already generated, you could create the following BASH shell script on the client, for example:

To do this on the client, and view the results, you can run the following commands:

After creating /etc/wireguard/wg0.conf, you can use the wg-quick up wg0 and wg-quick down wg0 commands to activate and deactivate wg0, or set your system to automatically activate wg0 at boot time using systemctl enable wg-quick@wg0.service.

You can connect multiple clients to the same server. In this case, the server will need to know the PublicKey, IP and port for each client, so you will have multiple [Peer] sections in the /etc/wireguard/wg0.conf file on the server, one for each client. After adding a new [Peer] section to this file, you must run the wg-quick down wg0 ; wg-quick up wg0 command on the server to activate the new configuration.

While having a VPN between a client and a server allows for encrypted communication between them, the most common use case for a VPN is to encrypt communication between a client and a network (typically a corporate network). In this case, the server functions as a router on this target network, and will route packets from the client to the target network after decrypting them.

This use case is called remote access (or site access), and allows a client to securely access the resources on a corporate network from across the internet as if their system was physically located on it.

The configuration of a remote access VPN depends on the structure of your target network. A sample network is shown below. Both home and corporate LANs connect to the internet via their internet service provider (ISP).

On the corporate side, the ISP often provides a demarcation point (demarc) router that provides a public IP address to a next generation firewall (NGFW). In addition to providing security functionality, the NGFW is often configured as a network address translation (NAT) router to allow corporate LANs to access the internet using private IP address ranges, such as the 10.0.x.0/24 networks shown below for the screened subnet zone, as well as the department LANs that connect to that subnet using a regular router.

The client shown below also has a private IP address (192.168.1.107) because it's usually on a home network behind a NAT router as well. 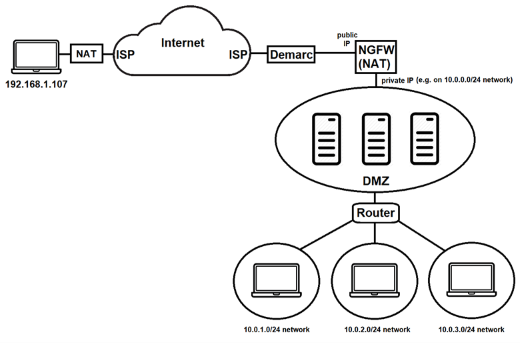 There are two main configuration methods for remote access, depending on whether the WireGuard server is located behind the NGFW, or directly connected to the demarc.

Method 1: Remote access using a WireGuard server behind a NGFW 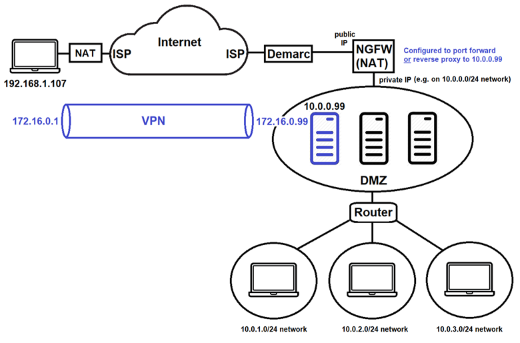 Thus, when configuring WireGuard on the client (192.168.1.107), you would specify endpoint publicIP, where publicIP is the public IP address of the NGFW visible across the internet. The NGFW must also be configured to accept WireGuard traffic on the port you specify and forward it internally to the server (10.0.0.99) using standard port forwarding or reverse proxy.

Finally, to allow the server to forward IPv4 requests it receives from the client to other LANs, you must perform the following tasks on the server:

Of course, all of this configuration could also be added to /etc/wireguard/wg0.conf on the client and server: 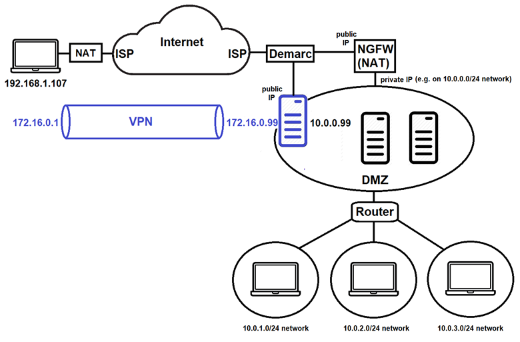 The biggest difference between this configuration and the previous one is that when configuring WireGuard on the client (192.168.1.107), you would specify endpoint publicIP, where publicIP is the public IP address of the server connected to the demarc. Consequently, there's no need to configure the NGFW to forward requests to 10.0.0.99.

All other configuration is identical to the previous example. However, recall that you must specify the network interface that is connected to the DMZ when configuring IP masquerading on the server. If this network is eth1 (since eth0 is connected to the demarc), you would need to run the iptables -A FORWARD -i wg0 -j ACCEPT; iptables -t nat -A POSTROUTING -o eth1 -j MASQUERADE command on the server.

Using WireGuard to Secure Traffic Between Two (Or More) Networks

The configuration would be very similar to our basic example at the beginning of this article. Instead of a client and a server, we could have server1 and server2, and each server would be configured as a router that performs masquerading.

The /etc/wireguard/wg0.conf configuration for these systems is shown below:

It's also important to note that many NGFWs have site-to-site VPNs built into them. I imagine that most of them will move to using WireGuard for this functionality over time for performance and security reasons!