BLOCKCHAIN: What Does the Future Hold? Discussed at Tech Policy Summit at Fly In

Monday, February 19, 2018 | By Lana Sansur
Blockchains have emerged as possibly one of the next big transformational technologies for government use in an effort to provide citizens with easy, online access to services and transactions. Blockchain technology is also at the forefront of many private industry sectors, including banking, real estate, and health care. 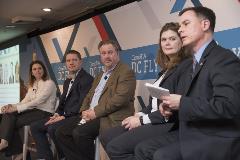 Blockchains have emerged as possibly one of the next big transformational technologies for government use in an effort to provide citizens with easy, online access to services and transactions.  Blockchain technology is also at the forefront of many private industry sectors, including banking, real estate, and health care.

At our third and final panel at the Tech Policy Summit at the 2018 CompTIA DC Fly-In, government and industry experts discussed security, transparency, and the multipurpose usage aspects of this emerging technology.

Robinson from CompTIA began by defining blockchain and said, “It is a method for recording transactional information. Rather than keeping a record of all transactions in a central location, blockchain utilizes a distributed ledger.  For a given activity, a copy of the full ledger with all transactions is kept on each node in a distributed network. The blockchain method provides many benefits over centralized forms of recordkeeping, including transparency of data and no single point of failure.”

Robinson noted that Blockchain is more of an enabling technology and serves as building blocks to automate, digitize, or streamline operations.  White from GSA saw blockchain technology as a way to connect legacy systems.  Waterfield from Grant Thornton said, “You can’t think of Blockchain as an established technology.  If you use your imagination, blockchain could potentially allow you to do many more things.”

Who is using blockchain technology?

Currently, there is a lot of interest about blockchain technology within the federal government. “Most of the expenditures for blockchain are in the proof of concept but GSA has the first live blockchain,” White said.

She said that GSA uses blockchain to automate and speed up contracts review for its FAStLane program. The Department of Defense currently is working to create a new digital supply chain powered by 3D manufacturing. DOD envisions a system where individual parts and products are digitally shared and believes that blockchain ledgers will help protect this new solution from cyber attacks.

The Center for Disease Control spent 2017 working on proofs of concept to use blockchain to better manage and automate the interplay between its fragmented and labor-intensive data systems. Officials believe development of usable applications in 2018 is a real possibility.

The Office of Personnel Management put out a request for in information in September 2017 for a new Federal Employee Digital Record System to house all federal employee data that includes a preference for solutions that leverage blockchain technology.

And finally, the Department of the Treasury has engaged with a contractor in a pilot project to develop a prototype blockchain to manage physical assets (such as computers and cell phones), noting the technology has "great potential for streamlining burdensome reconciliation operations that are involved in many financial transactions."

An audience member at Fly-In asked the panelists, “Can someone promise me that we get the security right for blockchain?”

Panelists all agreed that this aspect of blockchain hasn’t been solved yet because nobody has taken into account what might happen when all these pieces are put together.  Still it was noted that there are differences between public Blockchains (Bitcoin being the most prominent example) and a private or permissioned Blockchain, which requires an invitation and must be validated by either the network starter or by a set of rules put in place by the network starter.

In addition, most of the panelists stated that the benefits of Blockchain may lie in overall security but that this should not be overemphasized.  It should be noted that the Bitcoin blockchain has yet to be hacked, however, with the advent of quantum computing, it’s just a matter of time before there is an incident.  Other benefits of Blockchain should be considered.  Immutability for example, is a key benefit for Blockchain providing a certain sense of trustworthiness to the data that once imparted cannot be changed.

Amy Davine Kim with Chamber of Digital Commerce said, “The distributed nature of the technology also highlights one of the primary adoption challenges. Blockchain implementations utilize a broad network, and replacement of a centralized system, and requires the participation of everyone in that system. So, a very large organization with an internal system could take on its own blockchain project; a system with multiple parties and an independent central agency needs coordination and cooperation.”

Another audience member brought up a coding school he runs and noted in frustration that that there are no developers to code blockchain.  “There is more growth on the blockchain front outside of the United States.”

On the policy front, panelists agreed that blockchain needs to flourish and mature before we put together policies on this technology.

Recently, CompTIA published research titled, “Understanding Emerging Technology Blockchain.” The report defines blockchain, how companies are exploring and using blockchain, and the future challenges of blockchain.  Later this spring, CompTIA will be publishing a “Blockchain Guide for Federal and State Government.”  For more information about this guide and to submit case studies for consideration to be published in the Guide, please contact David Logsdon.