5 Novels For Tech Pros to Read

Friday, December 7, 2018 | By Matthew Stern
Time is at a premium these days for everyone – including and especially IT pros. But reading these five novels can give you a break from the screen, and a fresh perspective on technology today and tomorrow. 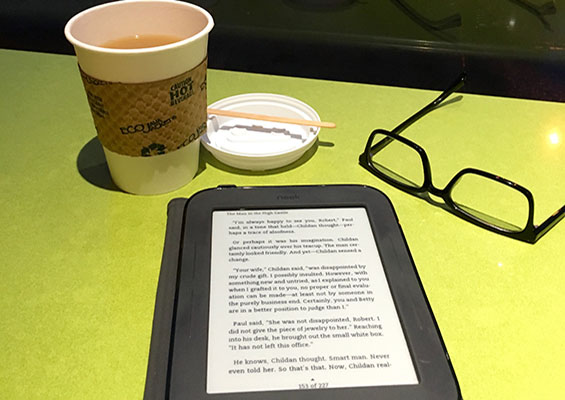 IT pros see the world of technology from a different vantage point than the general end user. They see trends in technology come and go. They understand the infrastructure that drives it. And they can appreciate and speculate about where it might take us. So it's no surprise that plenty of IT pros are big science fiction fans.

In today's busy, screen-dominated world, it's not always easy to find time to sit back and read a novel. But that might make doing just that more important than ever. With information blinking by faster than any human brain can process, slowing down to process a well-told story and the ideas therein can do more than just give you a much-needed break from information overload – it can give you a fresh perspective.

So no matter what your current IT job role or tech-sector aspirations, the following books are worth tearing through in your downtime during the holiday and beyond.

Rainbow's End by Vernor Vinge
A decade before the summer of Pokemon Go-mania, when flocks of the game's players stormed the streets staring at their smartphones in search of on-screen creatures to capture, Vernor Vinge was already playing around with ideas about mass augmented reality (AR) adoption and the social impact of AR gaming.

In Rainbow's End, most everyone engages the world with an AR-overlay. The most ardent technophile gamers have split out into separate “belief circles” built around AR games that map the worlds of their favorite branded properties over the world around them. The novel's action is set into motion when a mysterious, rabbit-shaped figure – possibly an emergent consciousness – shows up and starts wreaking havoc for cybersecurity professionals.

While near-future fiction tends to trend dystopian, this idea-packed techno-thriller's worldview isn't as anxiety-ridden as all that. Notably, the book kicks off in Barcelona amid the surreal, flowing architecture of Gaudi, and finishes out with a subtle, parallel paean to the creative capabilities of our crazy tech-enhanced, crowdsourced world.

Looking for more books related to technology and IT careers? Check out these:

What to Read Now: 6 Identity Stories for IT Pros

A Study in Futuristic Problem Solving

His Master's Voice by Stanislaw Lem
Polish science fiction author Stanislaw Lem was a one-man think-tank, most famous for his often-filmed novel of extraterrestrial contact Solaris (though he felt both of the major adaptations in his lifetime missed the point).

In His Master's Voice, the titular government program (HMV for short) monitors the universe for signs of extra-terrestrial intelligence. The book is told from the perspective of a participating mathematician who documents the program's attempt to figure out the meaning – if there is any – of what appears to be an anomalous, intentionally sent signal coming from space. The fictional project brings in scientists from across a dizzying array of disciplines, from evolutionary biology and astrophysics to philosophy and information theory.

What results is a mind-bending bootcamp of speculation that makes a reader really think about the expanses of problem solving and from how many different perspectives you can approach a single, tiny piece of data in search of the truth. This exercise in futurism can give any tech pro something to think about when facing a challenge.

A Classic Foretelling of a Cyberspace Future

Neuromancer by William Gibson
In his debut novel (and its antecedent short stories), William Gibson's noir-ish vision of the future both named and helped define that “consensual hallucination” in which we now all take part – cyberspace – despite Neuromancer being written at a time when the author himself claims to have never touched a computer.

In the book, Case is a down-and-out, drug-addled anti-hero, cut off from interfacing with the virtual reality (VR) substratum of the world's technology – the matrix – until he's given his ability back by shadowy forces who need his top-tier tech skills. The world of Neuromancer (and the other books in the Sprawl Trilogy) is one where gazillionaire tech moguls run the world, pursuing cryptic agendas backed by unlimited capital. (Sound familiar?)

Throughout Case and his team's action-packed mission, the presence and centrality of various forms of artificial intelligence (AI) raise classic philosophical questions, like what it means to be conscious, in a computerized context – prefiguring discussions that are now almost mainstream as computers get smarter.

If you've been told a thousand times by other techie friends to read this cyberpunk classic, consider this one more strong endorsement.

A Look at the Relationship Between Humans and Machines

Gallatea 2.2 by Richard Powers
In Richard Powers’ experimental hybrid of hyper-personal autobiography and fictional tech speculation, the author himself gets involved in a project to teach a neural network to interpret literary texts helmed by the wry computer scientist Dr. Philip Lentz.

As the project produces an AI – named Helen – that begins answering back intelligently, the novel raises a slew of questions about relationships – both between humans and intelligent machines, and humans and each other.

Melancholy and deeply sentimental, this story is as much about the people who pour the data into the computer as it is the mechanics of machine learning (though there's plenty of that, too). Areas like machine intelligence were highly theoretical in the mid-’90s when Powers was writing the book but have grown ever more trenchant.

As we find ourselves deploying and interacting with machines that think and learn, we begin to ask ourselves what their limits might be, where they might lead us and what a true conscious AI, trained by humans, would think upon waking up in our world.

An Imaginary World Based in Math and Science

Mission of Gravity by Hal Clement
There's hard science fiction, and then there's Hal Clement. A chemistry and astronomy teacher, Clement wrote novels that, while they might not always have the most fleshed-out characters, take absolute joy in pushing the scientific imagination to its farthest reaches while rooted in what we know about how the universe works.

This is true of his 1954 novel Mission of Gravity, which takes place on on the ellipsoid-shaped fictional Planet Mesklin. When he conceived of the planet, Clement did the math – coming up with realistic approximations of how gravity and other physical forces would operate on a planet with Meslkin's odd, oblong specs. Once the parameters were set, he built a world within them – populated by centipede creatures that are evolved to handle the extreme G-forces (and are scared of falling off of things).

Mission of Gravity may be better appreciated by the hardcore math and science set, but it's worth a read for anyone just to marvel at the method. Clement treats fiction as the ultimate sandbox to play with scientific concepts. It's something IT pros, developers and anyone who depends on creative problem solving can appreciate: the sheer fun of setting the parameters and finding what works inside them.

What’s on your reading list? Let us know in the comments.