Monday, February 19, 2018 | By Lana Sansur
On February 13th, we held our 7th annual CompTIA Tech Champion Awards dinner at the 2018 CompTIA DC Fly-In. The Tech Champion Award is given to one member of the House of Representatives, one member of the Senate, and one executive from industry who has exemplified leadership in the technology sector and have championed policies that advance the country's information technology (IT) industry. 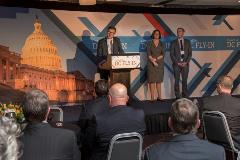 On February 13th, we held our 7th annual CompTIA Tech Champion Awards dinner at the 2018 CompTIA DC Fly-In. The Tech Champion Award is given to one member of the House of Representatives, one member of the Senate, and one executive from industry who has exemplified leadership in the technology sector and have championed policies that advance the country's information technology (IT) industry.

Two of our awardees in the Senate and House are sponsors of the CHANCE in Tech Act, which is legislation that CompTIA worked with allies on Capitol Hill to get introduced in 2017. In all, the dinner is a celebration of those who support and advance an innovative economy.

Under Steve Zylstra’s leadership, the Arizona Tech Council has made the Grand Canyon State a top destination in the country for technology companies and cutting-edge innovation. “His work pushing for R&D tax credits, increased workforce training and substantive tax cuts are just a few of the reasons tech companies are flocking to Arizona. CompTIA has worked with Steve for nearly a decade, and we are honored to present him with the Tech Champion Award,” said Elizabeth Hyman, executive vice president of public advocacy at CompTIA

Zylstra told the audience, “In my career, we’ve seen many technology innovations shape our lives – the proliferation in recent years has been incredible. Those who were not interested in technology at one point are now talking about cybersecurity and data breaches.  Conversations are now being had about emerging technologies such as artificial intelligence and robotics. I have been very fortunate to have worked with others who share my passion to grow the technology sector and remain competitive in a global economy.   It’s not always what government can do for you but what government can do to you.  Deep diving into public policy for pro-business and pro-growth initiatives has been incredibly rewarding.  I leave you with two words, Stay Positive – every day you have the opportunity to be a tech champion.”

Hyman said, “Representative Seth Moulton was instrumental in the introduction of the CHANCE in Tech Act last year. His work with the Massachusetts Technology Leadership Council (MassTLC), with local technology companies and educators have given him first-hand knowledge of how hands-on learning can create a more skilled workforce. With more than 23,000 unfilled tech jobs in his home state, Moulton has been working tirelessly to find solutions to close the growing skills gap and boost innovation.”

In accepting the Tech Champion award, Moulton told the audience, “You are helping to move our country forward and compete in a rapidly moving economy.  With the pace of innovation being so exceptionally fast, it’s important that opportunities are created for our children and our grandchildren.  Everybody has a role to play.  But there is a problem when we have so many unfilled tech job openings. We’re missing an opportunity to compete globally and that’s where the CHANCE in TECH Act comes in…there is a growing skills crisis. While companies should be taking the lead, government can incentivize them.  Together we can create the workforce of the future.”

Senator Cory Gardner has quickly become a leader on tech policy in the Senate with his willingness to work across the aisle to develop bipartisan approaches to addressing the tech divide in rural communities, ensuring government serves its people in this modern age, and advancing innovative solutions to growing American tech talent. “His leadership on the CHANCE in Tech Act in the Senate demonstrates his commitment to experiential learning and embracing approaches that can help people build up their skills in technology and fill the jobs that are out there right now for the taking,” said Hyman.

Gardner shared with the audience this interesting fact, “The technology sector has contributed more than $1 trillion to the U.S. economy, employed more than seven million workers, and added more than 100,000 new jobs. Yet, nationally, during any given 90-day period, there can be more than 500,000 tech job openings. Businesses throughout the country agree that there simply are not enough qualified workers to fill these positions. The CHANCE in Tech seeks to address the growing skills gap in the technology sector through expanding and investing in tech apprenticeship programs.” He added, “You’ve fostered the tools that have empowered this nation, created new opportunities, and new ways of doing business.  You continue to think big and have inspired this nation to think big…I thank you.”